It was in WA where Ryan Louwrens found a second chance at a rugby career and the Rebels scrumhalf couldn't be happier to be going up against the Force again.

The scrumhalf was at a crossroads as a teenager, banned for two years from rugby in his native South Africa over steroid use, not sure whether he would ever find a place in a rugby club again.

With his future under a cloud, he decided to look for a fresh start and move out to Australia, where his mother and stepfather lived in Perth.

Perth club Cottesloe opened the door for him and Louwrens worked his way up into a Force squad spot ahead of the 2014 season.

SUPER RUGBY AU TEAMS: ALL THE ROUND FIVE LINEUPS HERE

"After the two years I was very worried I wasn't going to be able to land a deal so I was very grateful for the Western Force for the opportunity they gave me for a second chance at a professional career, I was really thankful," he said.

A serious knee injury cut short his debut season short but it was another injury, three years later that took his career on another unexpected turn.

Louwrens had established himself as the Force's first-choice scrumhalf in 2017 under new coach Dave Wssels and was in the mix for a Test squad spot before a second ACL injury stopped him in his tracks.

That injury came amid a year in which the Force's future in Super Rugby was constantly under question, with the WA club ultimately axed from Super Rugby in September of that year.

Louwrens' wife Kharmen also fell pregnant with their second child around the same time and the then 26-year-old made the decision to head to Japan the next year, joining the Kintetsu Liners.

"I had the dream of playing for the Wallabies and then when I got injured in 2017 that all just basically fell away," he said.

"It was quite full on when we heard the Force were going to get cut too, it was a really draining few months.

"It wasn't just on me it was on all the players the staff, everyone at the Western Force, it was a tough year but everyone managed to get through it and it's great to see them back in Super Rugby," he said.

"I was lucky, I decided to go to Japan but there was so much uncertainty throughout the group." 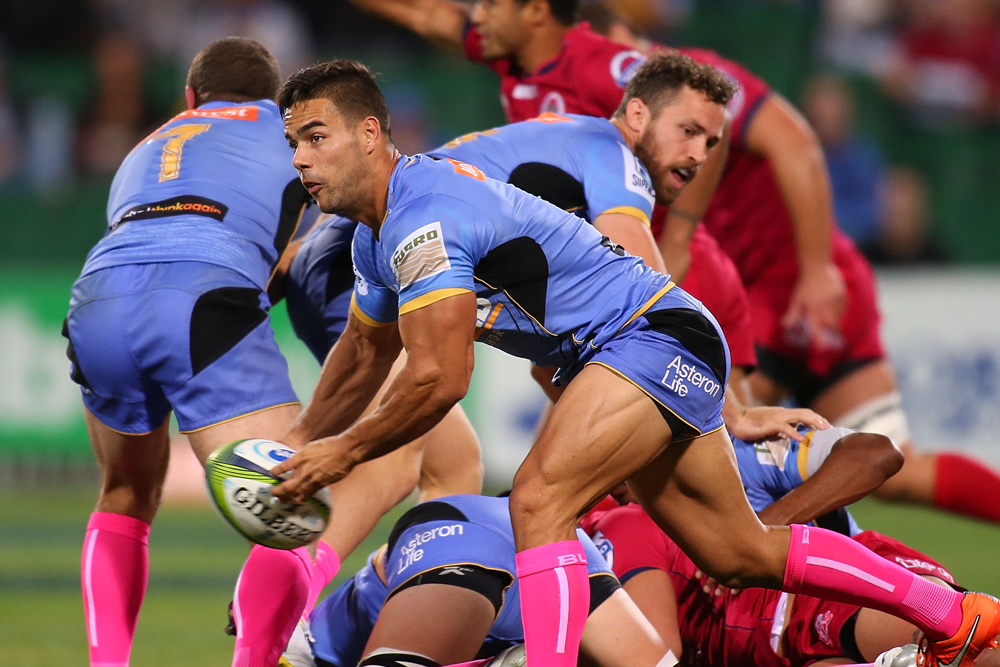 In Japan, Louwrens said he rediscovered some confidence that had fallen away with injuries, but still there was a sense of an unfinished story in Super Rugby.

Ironically, former Wallabies scrumhalf Will Genia signed with the Kintetsu Liners after the 2019 Rugby World Cup, opening up a spot at the Rebels and giving Louwrens a chance to reunite with former coach Dave Wessels.

"I think playing two seasons over there without one serious injury, you do get that confidence back up again," he said.

"It just got me in the right head space and as soon as I heard there was a spot open, Dave (Wessels) and I chatted about coming over here.

"I felt my Super Rugby career got cut short so I wanted to come over and prove to myself that I'm definitely up for it and I can play at that level."

Since he arrived in the preseason, Louwrens has worked his way back into the starting no. 9 spot, combining well with experienced flyhalf Matt To'omua.

This weekend he will face the club that gave him an opportunity for the first time as an opponent, along with many other figures connected to the WA team.

Many of the Force's biggest names moved to the Rebels after the side's axing, including coach Wessels.

On the flipside, former Rebel Jack McGregor has found a home in Perth.

There is a shared history as well out of that 2017 season, where the two sides were in many ways pitted against each other in the middle of constant speculation about which team would survive in Super Rugby the following year.

As they prepare to meet again on Friday night, from the Rebels' perspective, the feeling is one of welcoming rather than any bitter grudge.

"We know they're going to come out, they want to not prove a point but they want to compete and do really well," he said.

"We've acknowledged that in that sense but for us it's really good seeing them back in Super Rugby.

"We believe that Australian rugby is stronger with five teams, we've believed that all along, not just for this comp but for the future as well."

It's a view shared by Rebels coach Wessels, who believes the dramas of 2017 should never have come to pass.

"I probably feel like there's a rivalry with every team in the competition," he said.

"You're trying to go out there to win every game and playing the Force is no different to that.

"I can only speak from how I feel personally, I've got really fond memories of my time in Perth and all the people there, I know what a passionate rugby state they are and there's a lot of people in that team that i was lucky enough to have worked with when I was there and I know that.

"Probably my overwhelming feeling about it is I'm really pleased that they're back in the mix, they deserve to be there.

"I don't think that was either team's fault, I think that was the making of a wider challenge and I think from the players' point of view we want to compete from a rugby perspective, I don't think it's got any extra intensity than a Super Rugby game does have."

The Force take on the Rebels at Leichhardt Oval on Friday July 31, kicking off at 7:05pm AEST, LIVE on Foxtel, Foxtel Now and Kayo Sports. Buy tickets here. Buy a Kayo subscription here.