Q: So was it love at first sight when it came to rugby?

A: Not exactly.  I played league all through my junior years but when I went to Manly Boys (High School) they played rugby. That's how I got into it. We ended up beating Hurlstone Agricultural College to win the Waratah Shield in 1966 and I was picked in the NSW CHS side.  Towards the end of my school days I was playing lower grades for the Manly Blues. I played first grade at 18

Q: It was a quick rise from club rugby to international honours. Two years later you were a Wallaby?

A: I scored two tries in a state game (for NSW) against Queensland and we went back to the hotel and waited for the team to be announced the next morning. We then came back on the train to Sydney and it was a hard trip because I was in the side and my good mate Robbie Parker missed out. He was devastated and rightly so – he should have been in there. Anyway, he was that disappointed he hardly talked to me all the way home. I'd also had my small pox injections that morning and the arm flared up a bit, so it was an uncomfortable and long journey home. But I was in the team to South Africa.

Q: That is remembered as a very tough tour for the Wallabies. They lost the series 4-0 but personally it was a success? 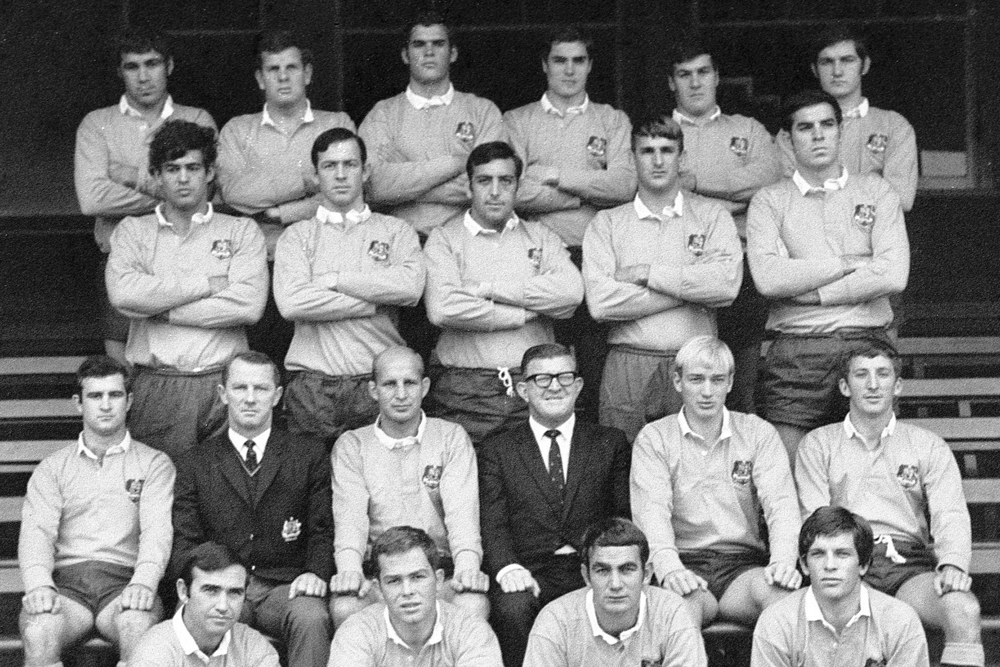 A: They'd beaten the All Blacks and the British Lions. They were the best team in the world. They beat us in four Tests but they were all close games except the first one. They had a huge pack of forwards and we just couldn't get possession. We were playing with 25 per cent possession. I got picked for the second Test in Durban after Phil Smith got injured. We lost 16-9 and then I got injured in a provincial game before the third Test, so didn't get picked. I came back in for the fourth Test in Bloemfontein. I scored a try to make it 9-8 (to South Africa) but then they scored two tries from set moves to take the game away. We were in that game for a long time but just couldn’t get the ball.  I was 20, the youngest bloke in the team. I was the baby of the team in my first trip overseas. It was a three and a half months tour and I played in two Tests and 16 matches altogether. It was a fantastic trip. I learnt a lot about rugby and life.

Q: It was the apartheid era in South Africa – that must have been confronting for a young bloke?

A: It was. I wasn't aware of how bad it was before I got there but I do remember seeing the signs "nie-blankes", which means 'non-whites' (In Afrikaans), and them cheering when I scored in front of them (in the fourth Test). They were cheering for us over the locals. They wanted us to win.

Q: You must have impressed. The following year you held your spot in the side for the Test against Scotland?

A: They weren't a great side like South Africa, but you take any international win. …we beat them pretty well (23-3) but should have won by even more. We scored six tries to nil but only kicked the one goal.

Q: In 1971 the Springboks toured Australia. You played in all three Tests but the series is best remembered for the anti-apartheid protests. What was it like to be in the middle of all that?

A: Not one of us approved of apartheid and I certainly didn't. It was a worthy cause they were protesting and thankfully that policy ended. I thought, as players, the best way we could have sent a strong message was to beat them, but we weren't in it. The demonstrations affected us more than the Springboks. The police had control of the situation so we never felt worried for our safety, but there was a lot of stop-start in the games because of the protests. They were throwing tacks on the field, there were smoke bombs, demonstrators were being dragged from the field – it was full-on. We weren't at full strength and they took full advantage. I played six Tests and five of them were against a very strong South Africa.

Q: The third Test of that series proved to be your last for the Wallabies, although there was one last rugby union honour?

A: I was picked to play in an international team (against England) to celebrate the centenary of the English Rugby Union at Twickenham. That was another fantastic experience. We scored seven tries to one and won 30-something to 11. Funnily enough we played against Johnny Gray that day. He and I ended up as teammates at Manly (rugby league) years later.

Q: Rugby league scouts had been circling you for a while and they finally got their man in 1972?

A: I got a call from Souths after I came back from that South African tour. They were keen and my half-brother (Richie Powell) had played with them and really wanted me to go. But I decided to stay loyal to rugby. In 1971 there was a Possibles v Probables trial before they picked the team to tour France but I'd got injured in the club grand final (playing for Manly against Randwick). I spent a few days in hospital and was on the beach on the day of the trial. I was a lifeguard back in those days. Anyway, they picked the team over the radio and my name didn't come out. I still think I should have been picked and thought 'I'm just going to look after myself from now'. That's when Wests (rugby league) came calling. I signed with the Maggies and played there for four years. From there it was two years at Balmain and then Manly after that.

Q: You packed a fair bit into your rugby league career, representing Australia at a World Cup, winning a premiership at Manly in extraordinary circumstances and getting yourself sent off a few times!

A: I would have played union longer had I not been left out (of the France tour) but league was good to me. I don't talk about it often because I only played three games for Australia (in league), but I am still proud to be a dual international. It's a big thing. So was winning a comp at Manly (in 1978). Playing all those games to win the comp…two replays and six games in 24 days. That will never be done again.

Q: And during all this time you were juggling work commitments and looking after some famous students?

A: I was a PE teacher from 1973, starting at Davidson High. We had a couple of famous students. Geoff Toovey was one but there was also the Farriss brothers and Michael Hutchence. I'd do the roll call and get to Hutchence and he'd say 'yeah'. I'd say 'beg your pardon?' and he'd say 'yeah, sir'. I said 'stand up straight, tuck your shirt in and get your hair off your face or you'll never make it in life'. I think he went on to show me well and truly (laughs). I also taught at Pittwater High and Joeys. I was at Joeys from 1985 to 2001. I suffered a back injury and had to give it up. I got a pay out after a court battle with the insurance company but my teaching was finished. I then got a job with the TAB running their gym in Ultimo. I worked there from 2001 to 2015 before retiring.

Q: How is life treating you these days?

A: Very good. I go for a walk every day and get to the park and do a few exercises and then swim at Avalon, even in winter. Another big part of my life is my grandkids. We’ve got four grandkids all under the age of seven. So they keep us busy. I get a lot of fun out of them. I'm still sliding down hills on pieces of cardboard with them at the age of 71! I'm the biggest idiot around (laughs).

Q: Finally, what are your thoughts on rugby these days?

A: I've got to admit I prefer the old days of running rugby. What I see now is not the same game I played – in league or union. The players are athletes but I'm not sure there are as many pure footballers like in my day. But I will always love the footy

'We need to be better': Rebels smash sleepy Brumbies in the wet to breathe new life into comp