UPDATE: Brumbies coach Dan McKellar says he hopes his side can continue "bucking the trends" after taking a 26-14 win over the Chiefs on Saturday night.

Saturday's victory was their first in New Zealand since 2014 and first over the Chiefs in Hamilton since 2007.

Looking more broadly, the clash was also the first Australian win over foreign opponents in Super Rugby this year, with the Reds yet to play the Sunwolves at the time of writing.

McKellar said he hoped their win could help breed some positivity around the game and silence some critics.

"Over the last two years, I've spoken to the group about bucking the trends and creating some positivity so that people are talking about good things in rugby union and not the negative things," he said. 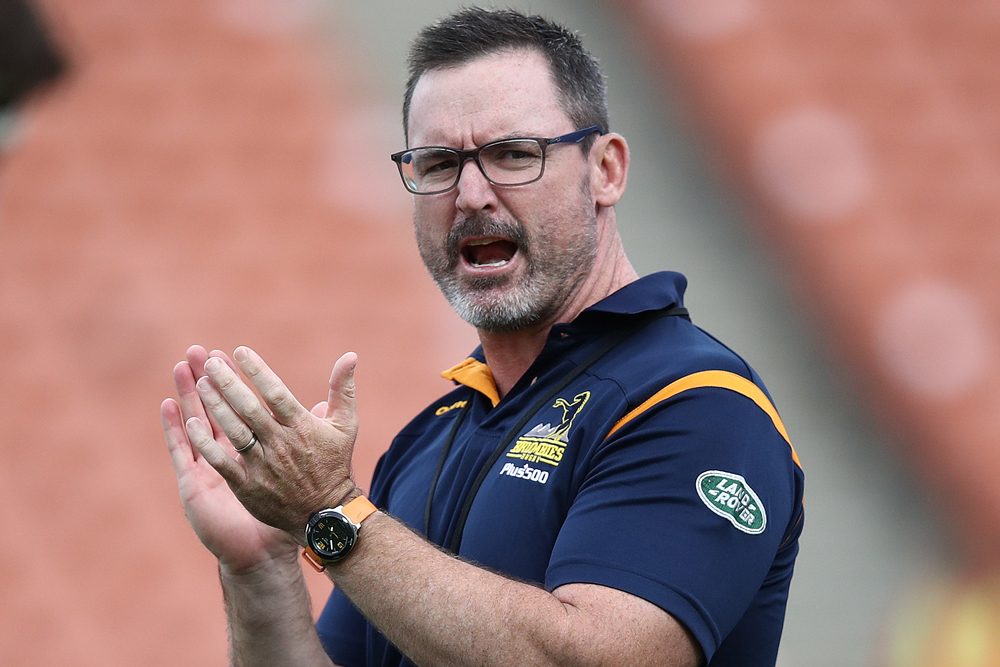 "There are so many people in our game that get enjoyment about bagging the game, so to get some positivity, I hope we do that.

"From a Brumbies point of view, we're obviously very happy and we're all moving forward now."

Talk about their lean record in New Zealand wasn't easy to avoid when they landed across the ditch, McKellar said, and he was open about the side's pleasure in turning the volume down on the Kiwi critics as well.

"We won't get too far ahead of ourselves but there's been some comments the players have taken note of around Australian sides in New Zealand which I think we've probably quietened a few people," he said.

"I don't watch any of that (media) stuff but the players have noticed it and I think they're pleased that they can quieten a couple of people down.

"We're not world beaters but we've achieved something special tonight that's really important for this group and now we can grow moving forward."

After a week in which the Brumbies battled the fallout of a rare mumps outbreak and lost hooker Folau Fainga’a to injury, the ACT side answered some questions about their game management and composure in the victory.

The win didn’t come without its hiccups in a rollercoaster affair in Hamilton, that saw the Chiefs threaten to finish with a flourish on their home turf. 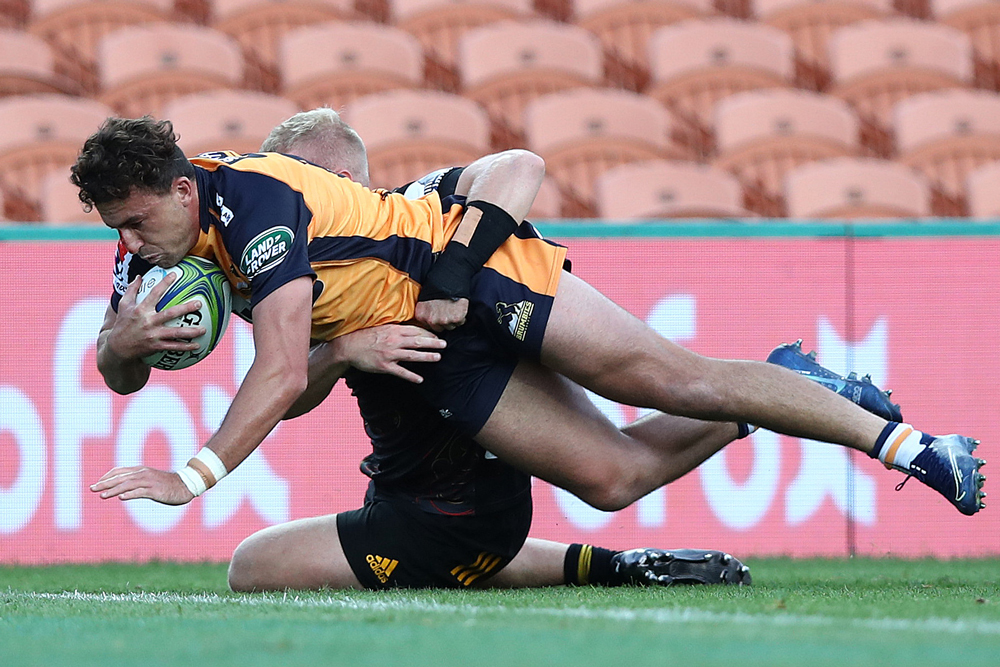 After coming so close in Canberra last weekend, McKellar said he was pleased to see his team close the game out.

"I thought for 79 minutes and 45 seconds we got it right last week," he said.

"We were one breakdown play from beating the Highlanders at home but it is nice.

"There's always growth and learnings every week for any football team but when you've got guys in key positions playing their fourth game of Super Rugby, it is pleasing."

Three unanswered first half tries put the Brumbies out to a 19-point lead and when Pete Samu crossed for his second score of the day in the 42nd minute, they looked near unstoppable.

The Chiefs weren’t willing to let the game slip away that easily and two quick tries, one against a 14-man Brumbies outfit, narrowed the margin to just 12 points going into the final quarter.

Momentum was truly swinging the Chiefs’ way as the clock ticked down but the Brumbies were able to take wins in pivotal moments, including some handy involvements from their bench, and showed their mettle to clinch the win.

Few embodied the ability to rebound from last week’s Highlanders loss than flyhalf Noah Lolesio, who had the best game of his fledgling Super Rugby career on Saturday.

The Brumbies had the bulk of the attacking momentum early against their undefeated opponents.

Tom Banks found the line after scooping up a juggling James Slipper offload and finishing an attacking passage started by Lolesio.

The Brumbies made it two in a row when Solomone Kata powered over the line, seeing off Chiefs playmaker Aaron Cruden in the process.

It wasn’t just scoring where the Brumbies were finding the advantage and their pressure was forcing Chiefs mistakes. 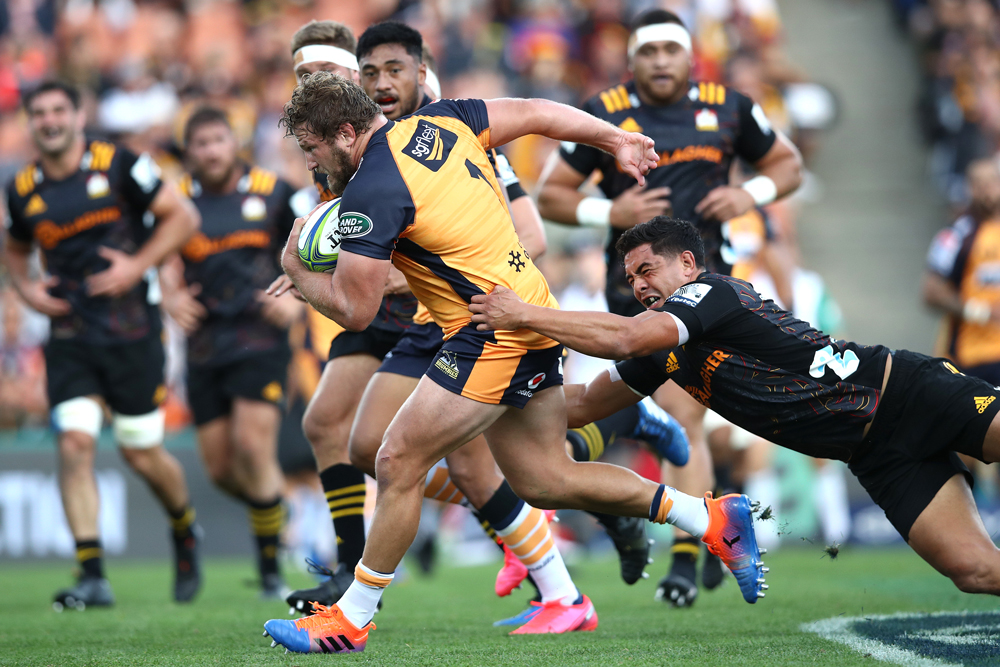 Often luck is borne out of dominance like the Brumbies were enjoying and a slice of fortune came when Damian McKenzie attempted to clean up a Tevita Kuridrani grubber but instead knocked it on.

The Brumbies opted for the scrum and Pete Samu plucked the ball and went straight over to give the visitors a 19-0 lead.

Samu had his second just two minutes into the second half, bursting through the Chiefs defensive line and running 25 metres to score.

The Chiefs began to build some attacking pressure and it was Aaron Cruden who finally broke through for a score for the Kiwis.

After that, the momentum began to swing the Chiefs way and an offside infringement from James Slipper saw him sent the bin and the Brumbies a man down.

The Chiefs took that as an opportunity to pressure a seven-man Brumbies scrum deep in their attacking zone. 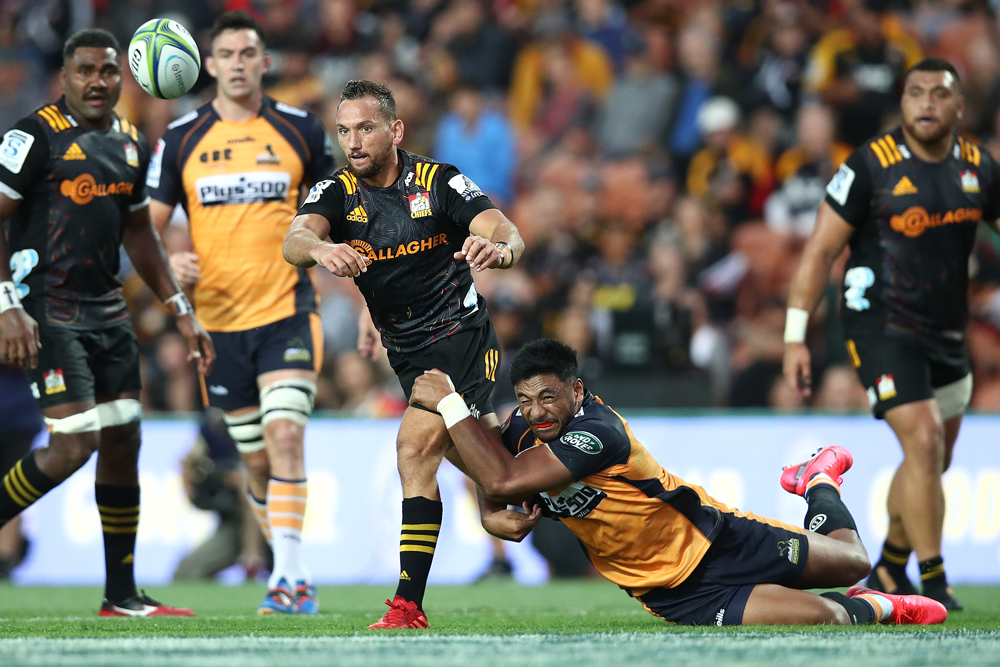 Though the Brumbies scrummed well in their position, the Chiefs engineered a try from their second pack down as no. 8 Pita Sowakula grabbed the ball with one hand and Anton Lienert-Brown finished off the next phase.

Scoring dried up somewhat after that but the Brumbies were opening the door for the Chiefs to continue hunting for another try.

Misjudged passes and some ill discipline put the Brumbies on the back foot in the final 15 minutes but they managed to stave off every immediate threat the Chiefs posed.

Replacement hooker Lachlan Lonergan had a major influence in his first minutes on the park, winning a steal deep in the Brumbies’ danger zone and relieving the pressure on his side.

The Brumbies now sit comfortably on top of the Australian conference and will take plenty of confidence into their bye week.