Waratahs centre Karmichael Hunt says he was left heartbroken by the death of Kobe Bryant this week and hopes the NBA icon's famed Mamba Mentality can spur on a new generation of athletes around the globe.

The avid NBA fan followed Bryant through his whole career and as a father of three girls was especially devastated to hear of the passing of the Lakers legend, his teenage daughter Gianna and seven others in a helicopter crash a week ago.

"Basketball for me is probably the best sport and I say that affectionately, I probably spent more time playing basketball as a youth than I did playing league or playing union," Hunt told RUGBY.com.au.

"I've had deaths in he family and I've had grandparents and things like that pass away but I've never really been affected from someone else's death  that I don't really have an intimate relationship with.

"Just on TV and flowing on his story, plenty of inspiration and good childhood memories that he’s given me but the biggest thing that hurt the most was just his daughter going down with him.

My baby girls first taste of the sport I love

"Being a father of girls as well and just what he was doing with his girls, pushing women's sport, pushing children's sport, just breaks my heart."

While Hunt never met Bryant, he was one of millions who closely followed the icon's career and the development of his famous Mamba mentality.

That mentality has inspired Hunt, particularly in recent years, to vie to keep finding ways to improve in his sport.

"I think the basis of his Mamba mentality was just curiosity around what makes you tick, how you can get better - modelling your game on someone else or going to the  coaches and saying, 'How can I do this a little bit better?'," he said.

"I guess he had an OCD kind of mindset around his craft and you'd hear about it in training sessions he'd do at 2am or just be working hour after hour.

"I can't say that I'm that crazy, but I do try and make sure I am as dedicated to my craft and I am curious about my craft and how can I do better and what do I need to do to beat the opponent.

"All that stuff, at the core of it is the Mamba mentality and definitely rubs off but the good thing is the concept around what he was trying to get to was pretty well known and hopefully generations and people continue to live it and take it on board and bring it to life."

Residents in south CBR should expect to see active flames on the horizon. Today, several retardant drops occurred near Tharwa. Tonight, crews are strengthening containment lines with a planned backburn along Naas Rd on the east side of Mt Tennent.Please remain alert, not alarmed pic.twitter.com/hwvQH9jmew

Brumbies coach Dan Mckellar made light of the situation but seeing police officers door-knocking his neighbourhood on Friday put a game of football in the height of summer into perspective.

When he pulled up his garage door on Friday afternoon to leave for the office, McKellar was greeted by police officers and army reserve personnel checking to ensure residents had a bushfire evacuation plan.

"They asked me what my fire exit plan was," McKellar said.

All jokes aside, McKellar hopes he and his team were able to put a smile on the faces of people who have been through a hard time this summer with their win over the Reds.

"We feel for all the people. It's not a pleasant time for Australia or the ACT and the south coast area," he said.

"We've had Will Miller over Christmas, the Lonergans are in that area as well, we've got staff who live down that way and obviously many of our supporters and people within our community.

"(Playing for them) was something we spoke about before the game and hopefully we put a smile on a few people's faces."

The 7436 fans that braved near 40 degree conditions at kick-off of the Brumbies-Reds clash are the hardiest of fans.

Conditions in the stadium were brutal, with the concrete stands at GIO Stadium radiating heat throughout the clash, while a pall of smoke could be seen to the south where the Orroral Valley bushfire has now burned through more than one-fifth of the ACT, continued to threaten homes.

These superfans had plenty of appreciation for the players but the biggest cheer of the night went to firefighters who were celebrated before the game, their efforts earning a standing ovation. 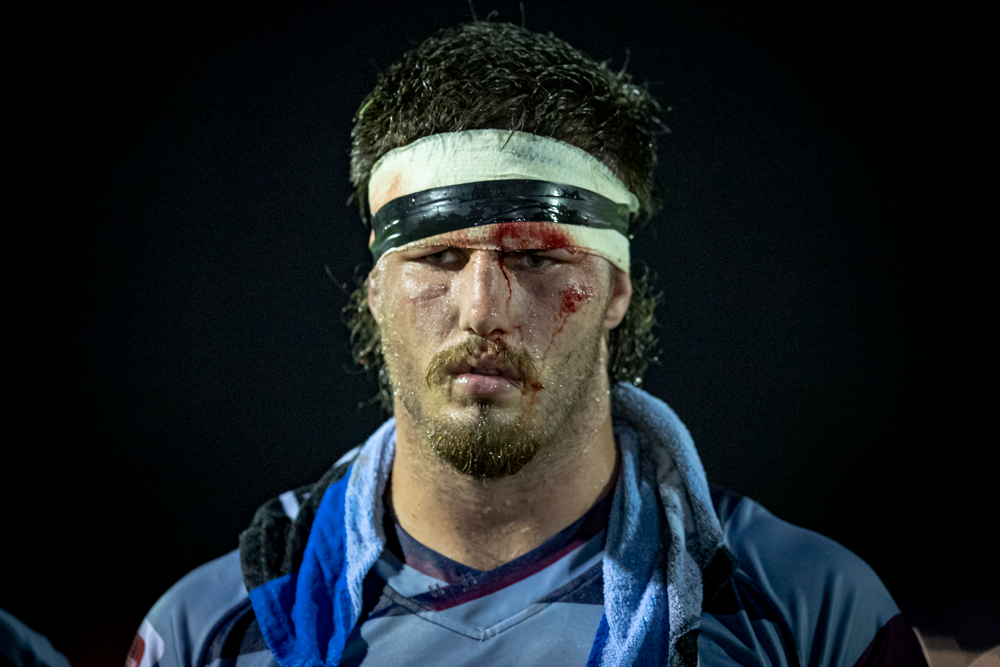 Reds captain Liam Wright's hair has been the focus of plenty of pre-season jibes but it was another area of his head that was causing more concern heading into the first game of the season against the Brumbies on Friday night.

Wright ended up with 17 stitches to two separate cuts over his right eye and forehead from the Reds' final trial against the Waratahs in Dalby and is likely to end the season with a nice reminder of his first year as captain given the propensity of cuts in the area to reopen.

"We'll strap it up pretty tight and it'll just be business as usual really," he said.

"We're figuring out some clever ways to cover it up but as a seven, you put your head in some pretty ugly places, so we'll see how it pulls up."

Wright had hinted at a visit to the barber ahead of the Reds' season opener, but the mullet still stands.

We all know the rugby community is a tight knit one but Dan McKellar provided a reminder earlier this week of the links that exist even between opponents.

Asked about the threat of new Reds flyhalf Isaac Lucas, McKellar was able to share a very early memory of the playmaker.

"You can tell he's grown up and played a lot of footy in the backyard with the other (Lucas brothers)," he said.

"He's just a natural footballer and he's had that from when he was a kid.

"I remember seeing him running around as a ballboy at Sunnybank when I was coaching Souths.

"He's been around rugby, he's got natural instincts, he's got good footwork, speed off the mark so he's got to also direct them around the park. in Super Rugby, ten's a different ball game when you've got line speed pressure and that sort of thing coming at you."

If you think you saw Rugby AU CEO Raelene Castle at the Sydney 7s last weekend, then you might need to double check.

A bunch of keen fans dressed up as the administrator and Castle snapped a pic with them on Saturday.

Perrett has been a trailblazer for women in rugby refereeing and worked her way back to the top after giving birth to a baby in March 2018. 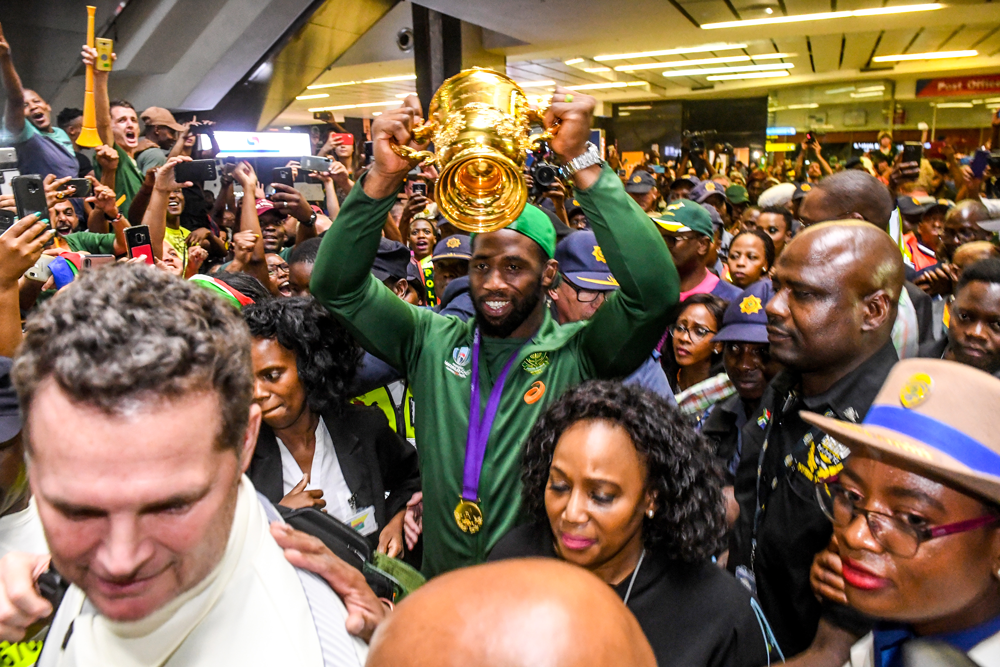 South Africa claimed a third Rugby World Cup win last year, to follow on from victories in 1995 and 2007.

The 1995 victory, in South Africa, has become such an iconic sporting moment that it was turned into a blockbuster movie.

Even with that history, Habana said he felt that those two tournaments paled in comparison to this time around.

"Rugby's been that one sport post-Apartheid  that has given our country back so much in terms of unification, in terms of hope and inspiration and bringing people together," he said.

"I got inspired by the group of '95 to take up the game of rugby. 2007 I got to see what being at that point and giving back to our country in terms of bringing a world cup back meant to kids in the rural townships in the Eastern cape, running two or three kilometres barefoot behind the bus just to get a glimpse of their heroes and then we get to see the real tangible story of Siya Kolisi becoming the first African player to not only captain the country but to go on and win it.

"For South Africans, to see celebrations what I believe, celebrations that were bigger and deservingly so than '95 and 2007 put together, was due credit for the journey that team went down but potentially more for that particular player and playing group went on, which was really amazing."

The Bledisloe Cup is less than three weeks away. This is how Dave Rennie wants the Wallabies to play

Irae Simone didn't leave New Zealand until after high school. As an 11-year-old, he told his family he wanted to play for the Wallabies

Yesterday at 11:17 AM International
Feature

'This is a top-class signing': Kuridrani leaves Brumbies to join rival Australian club