Australia's women have taken silver in Cape Town after a brutal Cup final loss to New Zealand while the men fell to 12th place in South Africa.

It was a big day for speedster Ellia Green, who scored her 129th World Series try to move to the top of Australia's all-time try-scoring tally.

Australia's men played Canada in their only game of the day, losing the 11th place playoff 22-5.

New Zealand finished on top of the men's competition as well, breaking the hearts of the home town hero Bitzboks in a 7-5 Cup final thriller.

The World Series moves close to home next with legs in Hamilton and Sydney in the last weekend of January and first weekend of February 2020.

All the action from day one here.

Australia's women have finished second in the inaugural Cape Town Sevens after a 17-7 loss to New Zealand in Monday morning's Cup final.

The two fierce rivals played out a fierce Cup decider but ultimately New Zealand turned their half-chances into scores in the brutal encounter.

New Zealand peppered the Australian defence and it was Kelly Brazier who eventually broke through with a spectacular step in the third minute.

New Zealand forced some key penalties at the breakdown and a knock-on call on a Shannon Parry chargedown gave the world no. 1s the scrum feed.

It was off the back of that set piece that New Zealand scored their second, through Ruby Tui, to open up a 12-point lead at the break.

Australia were not quite done and Ellia Green took just 30 seconds to notch their first try of the game, leaving Niall Williams in her wake on the way to the line.

The game slowed down somewhat after that in a tense affair until Tui again found the smallest slice of space, accelerating out of Cassie Staples' grasp.

A final penalty for New Zealand gave them the final say of the day and they hung on to possession to ensure the victory.

Australia sits second in the overall World Series standings after the first three legs, with two Cup finals and a semi-final appearance to their tally. 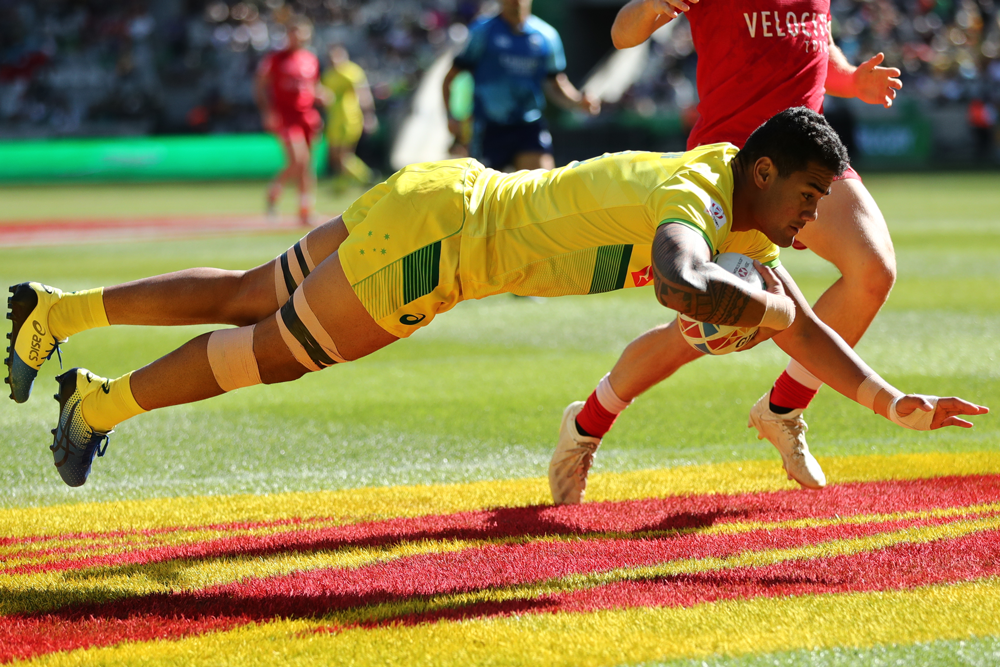 Australia's men have slumped to their worst finish in a World Series event since 2013, losing the 11th place playoff to Canada 22-5.

Canada's Pat Kay opened the scoring for the Canadians and Australia's Jeral Skelton hit back to keep things tight initially.

Skelton's score, though, was Australia's only foray over the line in what developed into a game of one-way traffic.

Josh Turner was sent to the bin not long after that try and Canada took advantage, scoring their second just before half-time.

Two second-half tries to the Canadians sealed the result and sent the Australians home with plenty to ponder before next month's Sydney 7s.

Twelfth is the worst finish for Australia's men in a World Series event since a 13th-place finish in the 2012-2013 Las Vegas tournament.

The result means their assignments in New Zealand and Sydney next month will only become harder as they drop to the third bracket of four teams for the pool draw, done after the completion of the Cape Town tournament.

"We call her the GOAT and she's one of my best mates in the team..."@GeezyGreen says it perfectly after breaking team mate Emilee Cherry's try record and becoming @Aussie7s all time top try scorer.

They play in the #CapeTown7s cup final at 18.56 local pic.twitter.com/vhvCnTJB9n

Australia's women are through to the inaugural Cape Town Sevens final after a 24-19 semi-final win over France.

Things didn’t come easy in their first win over the French since Sydney 2018 but when the pressure was on the Aussies found a way to edge their way on top.

The Aussies had the majority of the attack early in the piece but couldn't quite penetrate the French defence.

That was until Madison Ashby found a gap in the French line and turned on the after burners to score in the third minute.

France struck back in the fifth minute after Chloe Pelle spun her way out of an Australian tackle to hand her side the lead.

An immense show of strength from Ellia Green snuffed out France's lead immediately as the speedster fended off a French defender to score.

Green's try was her 129th World Series try, moving her ahead of Emilee Cherry as Australia's leading scorer.

Jakiya Whitfeld scored her third try of the day taking the ball from the base of a ruck and slipping down the blind side to give the Aussies a 10-point buffer at the break.

France whittled back the margin with a clinical try in the ninth minute bringing the gap back to five points and a second, to Shannon Izar, two minutes later put the Aussies on the back foot once more.

A perfectly executed passing chain from Australia opened up space for Rhiannon Byers to streak down the right edge and take the lead once more in the final minute.

Green sealed the result with an enormous defensive hit and the emotion in the team was clear when the final whistle blew.

Australia will take on the winner of New Zealand vs Canada in the Cup final at 3:27am AEDT.

Full-time buzzer sounds, and it's knock-on from Fiji.

Australia's women will take on France in the Cape Town semi-finals after a come-from-behind 38-7 quarter-final win over Fiji.

Fiji had the early upper hand in attack and they found reward in spectacular fashion with a score in the first minute but Australia's patience and discipline ultimately proved the difference.

Displaying some of the signature offloading that their male counterparts have perfected in recent years, Fiji created plenty of early headaches for Australia.

The Fijians' defence put some heat on Australia as well and an unfortunate pass, that deflected off the referee, snuffed out the Aussies' attacking momentum.

Australia were forced to look for low-percentage offloads as Fiji pressed and held onto their early advantage.

Fiji looked like scoring again in the fourth minute but Emma Tonegato forced the attacker into touch and gave the Aussies another chance to build their own pressure.

Ellia Green needed just a sliver of space to streak down the edge but the speedster was taken down by a desperate Fijian tackler short of the line.

Some patience in attack paid off for Australia with some edge-to-edge play opening up space for Cassie Staples for score their first.

From then, the traffic went all Australia's way, as Fiji's  penalty count rose and the Aussies' execution improved.

Rookies Jakiya Whitfeld and Faith Nathan book-ended the last-gasp scoring play to give Australia the lead and plenty of momentum going into half-time.

Nathan took less than 30 seconds in the second half to score her double, leaving Fiji's defence in her wake after stepping through a hole in the opposition line.

A yellow card for a high tackle gave the Aussies a one-player advantage and Fiji began to wilt under immense pressure.

Staples made the most of the extra player with the next play, scoring her second of the clash.

Whitfeld added to the score sheet with three minutes to go and the speedster dubbed "Winx" made it two in a row in less than two minutes.

The Aussies take on France in the Cup semi-final at 10:55pm AEDT.