UPDATE: Wallabies coach Michael Cheika praised the persistence of his forward pack after Australia survived a brutal Georgian challenge to take a 27-8 bonus point win in their final pool match.

While the Wallabies’ match was given the go ahead despite the looming Typhoon Hagibis, the teams still felt the first taste of the tropical storm on Friday night with relentless rain and swirling winds bearing down on Shizuoka.

It wasn’t just the blustery night giving the Wallabies a challenge - the Georigans literally and figuratively threw everything they had at Australia led by a monstrous defensive performance.

Asked pre-match if his team would use a tactical kicking game given the conditions, coach Michael Cheika said, “I don’t think we have one” and their start to the game mirrored that philosophy. 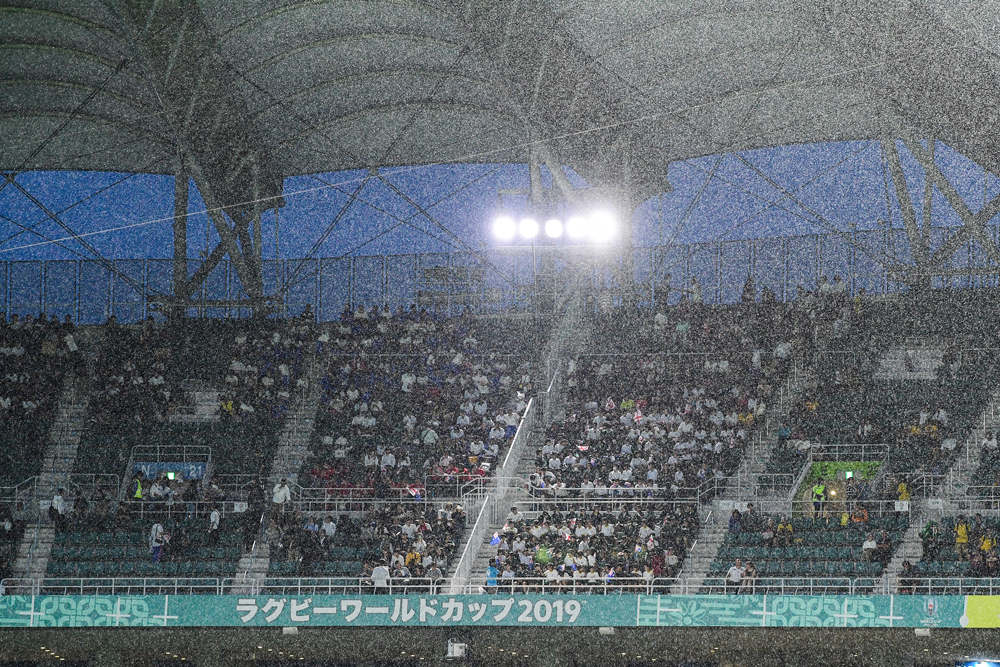 The Wallabies looked to move the ball and move it quickly but dogged Georgian outfit looked to put a halt to any progress they made in attack, and from the outset it seemed there would be no final pool match blowout.

Wallabies coach Michael Cheika said while it was clear his team was never going to resort to an overwhelmingly kick-heavy game, they were too sloppy in their handling.

"It's pretty obvious, we're the lowest kickers in international footy," he said.

"We like to play with the ball in our hand. We knew the conditions were tricky and I thought we did drop a bit too much ball.

"We carried a bit too much ball on our chest. In the conditions, that's going to happen, that you're going to get ball spitting out.

"They were clean drops.

"But I thought our carrying was strong. We just didn't have the finishing touch on a lot of stuff so we'll definitely need to fix that up.

"We'll be ready for it, to finish the opportunities that come our way before next weekend."

Australia dominated the possession (79 per cent) and territory (85 per cent) in the opening half but Georgia’s immense defensive effort, making 128 tackles before half-time, was akin to an impenetrable wall.

"The first game against Georgia they certainly delivered in terms of set piece physicality and it was a perfect day for set piece play."

Pocock said Georgia's defence had forced the Wallabies into a re-think in attack.

We talked about it (going wide), tossing up whether to take the points early like that or really back our set piece," he said.

"We'll have a look at it later. Their defence was really solid. Credit to them, through the whole game they were really solid.

While their backline was expected to be the difference in the match, their X-factor backs weren’t able to break the game open early with Samu Kerevi especially having limited opportunities with the ball.

Cheika praised his pack after the match, pleased to see them grind the team to an advantage.

"I thought it was a good challenge and I thought our forwards stepped right up to it to be honest," he said.

"We know how effective the Georgian scrum can be and we handled that pretty well.

"We scored a maul try probably could've done a little bit better on those with a bit more discipline,.

"It was always going to be one of those types of nights with he conditions. It was a good hit-out for the forwards, they got a good shift in."

Winger Marika Koroibete forced himself into the contest and earned a pressure-relieving try for his efforts in the second half as the Wallabies began to pull away. 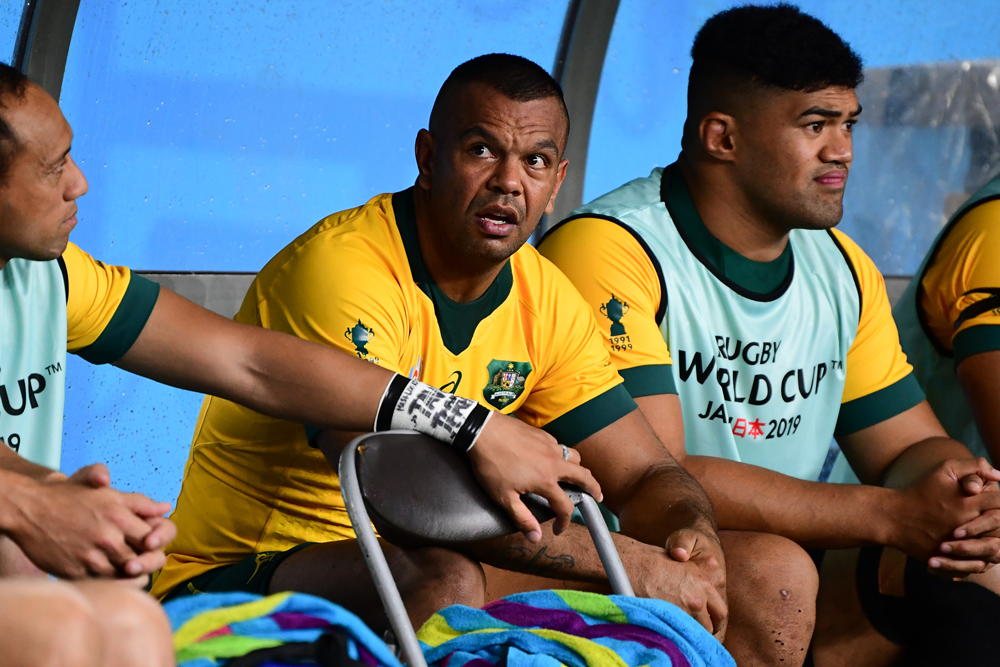 The Wallabies were dealt an early injury blow with fullback Kurtley Beale being helped off the ground after Georgia outside centre Kacaharaca slipped and collected the Aussie in the head in as Beale was tackled.

Australia finally cracked the scoreboard in the 23rd minute with Nic White finishing off a persistent attacking charge, forcing his way over from the back of a ruck.

Georgia began to put pressure on the Wallabies, winning a penalty deep in Australia’s territory and a high tackle infringement gave Soso Matiashvili the chance to open Georgia’s account.

The Wallabies closed out the half a man down after Isi Naisarani was yellow-carded for high contact in a cleanout.

It was Georgia who made the first attacking strides in the second half but a dropped ball relieved the heat on Australia. 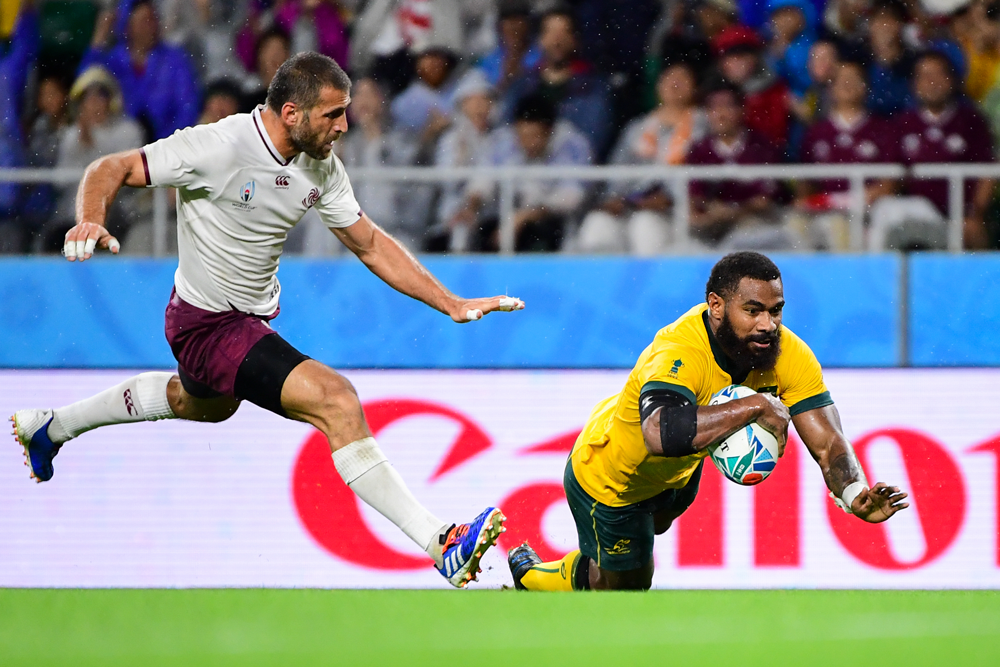 Just as it seemed inevitable that the game would descend into a grit fest, winger Marika Koroibete made one touch count, dancing around the Georgian defence to score.

Georgia had their own answer for that, with winger Alexander Todua collecting a superb outside pass and taking off down the left edge to narrow the gap to nine points with as many minutes remaining.

The Wallabies leant on their set piece to score the match-sealer, with flanker Jack Dempsey capping off a solid night with a strong try from a lineout.

Reserve prop Taniela Tupou made a huge impact when he came on and set up Will Genia for the final try of the evening to give the Wallabies a bonus-point result in every match they played.

Lock Rob Simmons came on midway through the second half to play his 100th Test and played a role in former Reds teammate Genia's score.

With a minimum eight-day turnaround for the Wallabies, who look all but certain to play England in next Saturday’s first quarter-final, Beale would likely be expected to be available to play.

Captain Michael Hooper and lock Adam Coleman would also be expected to come into the 23 after being late withdrawals for the Georgia match.

The Wallabies will play the English unless Wales loses to Uruguay on Sunday, in which case the Aussies would play France on Sunday week.

Australia’s post-match travel plans were yet to be determined at the time of writing, with all trains to Tokyo cancelled on Saturday.