by Emma Greenwood
Isi Naisarani could make his Test debut in South Africa after being named to the Wallabies' squad of 34 for their Rugby Championship opener. Photo: RUGBY.com.au/Stuart Walmsley

He's the hard running, bone rattling no.8 set to change the face of the Wallabies heading to the World Cup.

Isi Naisarani is set to make his Australian debut as a 110kg machine who loves to "smoke" opposition players with a big tackle as much as he enjoys running the ball.

But his love for rugby was born in his native Fiji, where a young Naisarani and mates would copy the moves of their sevens heroes in barefoot games where plastic bottles substituted for a ball.

"Back home in Fiji we just played touch rugby every afternoon just throwing the ball around like when you watch the Fijian team," Naisarani said.

Kids of all ages would gather on the field at Naqali, about 30 minutes inland from Suva, emulating the moves of their idols. 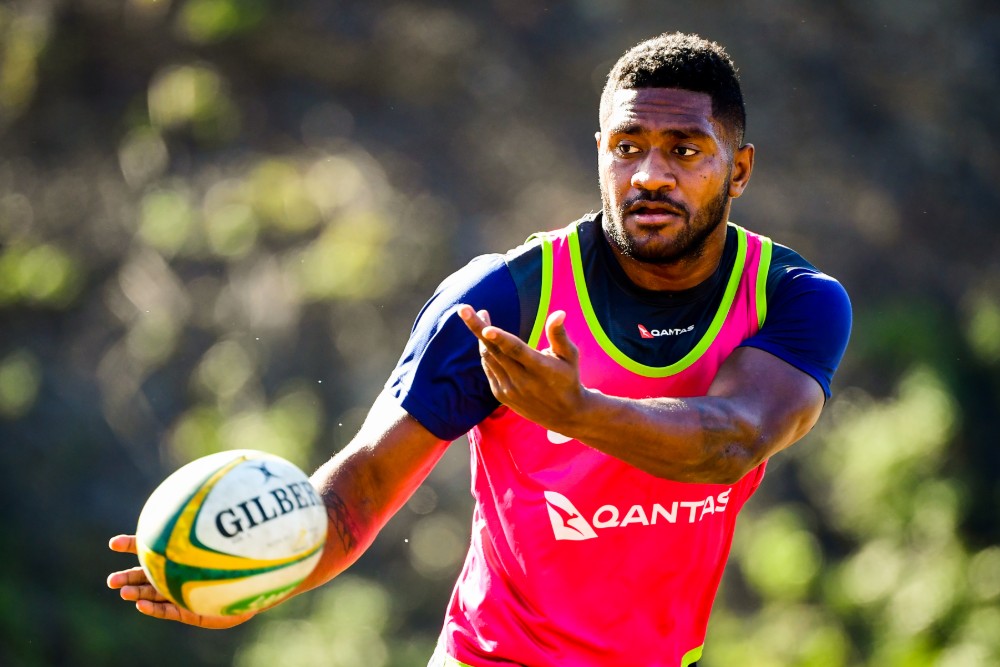 It helped Naisarani hone his game enough that when his aunt and uncle visited Fiji from Brisbane in 2014 and saw their nephew play, they offered to bring him to Australia to further his chances in the game.

He played a season at Souths before returning to Fiji to have his visa processed and headed back to Australia in 2016 to live with Jesoni and Vive at Mt Gravatt in Brisbane's south, where he began the three-year waiting period to satisfy World Rugby's residency rules.

Just 21, when he left Fiji and parents Waisele and Naina, with plans to eventually don the gold jersey, Naisarani said he did not go with a heavy heart.

"I always tell myself, that it was an opportunity for me," he said.

"Back home you didn't get the opportunity to come overseas to play.

"When my uncle asked my dad if they could bring me over here, I wanted to go for it - because opportunities (only) come once.

"My uncle always talked to me every time and said, this is an opportunity for you. He knew that when I was a kid back home, I'd run around with a plastic bottle and I've got a rugby talent that I could showcase when I came overseas."

Naisarani has long been touted a Wallaby-in-waiting.

And there were no surprises when he was among 34 players named in Michael Cheika's first squad named in the World Cup year.

"It's been great to be in the Wallabies mix," Naisarani said.

"We've been training really hard and for me, I just need to keep working hard and show the coach that I want to be in the 23 when the first game comes up.

"Hard work is the main thing for me. I've been waiting for three years, playing with different clubs - the Western Force, Brumbies and Rebels - and I just need to stick to my goal which is to play for the Wallabies."

That goal was set in stone when Naisarani returned to Brisbane in 2016.

"When I got here in Australia, in 2016, I set my goal. I started playing club rugby for Souths and then I got chosen to play for Brisbane City in the NRC and I just set my goal and kept working hard," he said.

"I loved watching the Wallabies when I was in Fiji and I know that I wasn't eligible to play for the Wallabies in that year but I kept working hard so that when the Wallabies time came I was ready to go.

"Now I'm training with them and I'll keep working hard and see what the coach picks on game day when they choose the team."

Naisarani is widely expected to be at no.8 when the Wallabies kick off their Rugby Championship campaign against the Springboks in Johannesburg on July 20.

While he can also play at no.6, Naisarani believes his best position is at the back of the scrum, where he waged a strong Super Rugby campaign this season for the Rebels working in concert with new Wallabies attack coach Shaun Berne and likely Australian halfback Will Genia.

"After training with the Rebels, especially Willy G, I learnt some running lines from him that can help me in the game and they always help me a lot in some of the rugby stuff," Naisarani said.

"I think Shaun Berne, the way he teaches us attack shape and structure (is good), running lines from Willy G."

Only Sharks no.8 Daniel du Preez (168) had more runs in his position than Naisarani (161) this Super Rugby season despite the Rebels forward turning out in just 13 games due to a toe injury and Rugby Australia's workload management policy.

And the 24-year-old finished with the most run metres and tackles per game on his way to being named Melbourne's players' player this season.

While his love for rugby was sparked through the attacking play of his childhood heroes, Wallabies George Gregan and Stephen Larkham, as well as Fijian powerhouse winger Rupeni Caucaunibuca, the silver lining for Australia is Naisarani's love of physical defence. 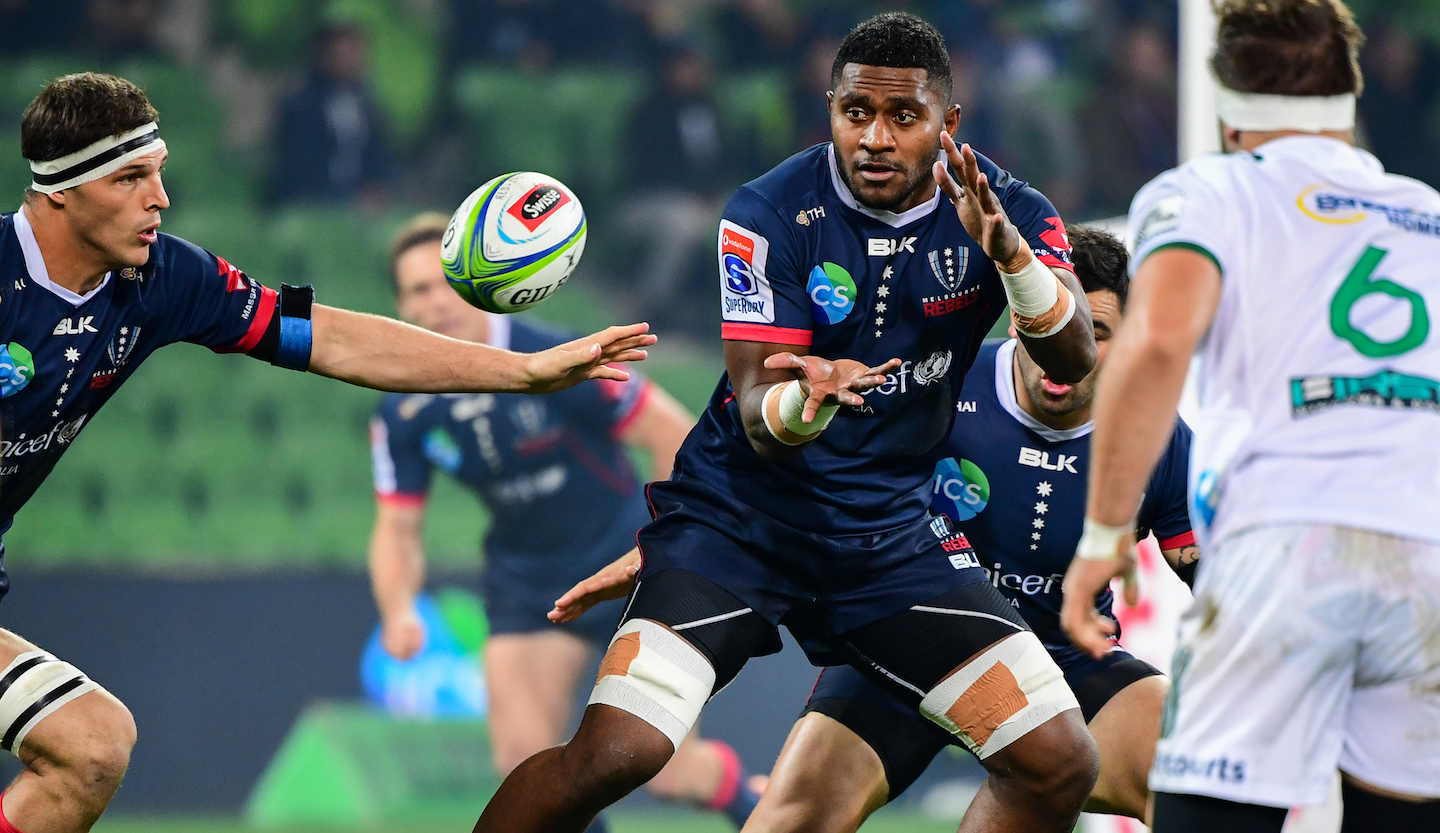 "I'm trying to get into my game 'smoking' players, big hits, that's the way I like my game," he said.

It's an attribute he will bring if he is named in Cheika's game-day 23 to face the Springboks next weekend in what will be an emotional debut after his long wait to don a gold jersey.

"It's a great honour for me to be part of this Wallabies squad," Naisarani said.

"I've been waiting for so long to be in this environment.

"I'll just keep working hard, do what I normally do during training and the game and opportunity will come if I keep working like that."

It's the first step that could lead full circle - to a World Cup debut against Fiji in Sapporo in September.

"If I get picked or if I'm just there with the boys, there's a couple of Fijian boys in our team and we always talk about how Australia gave us an opportunity," Naisarani said.

"If we don a Wallabies jersey when we play against Fiji, we will all give our best."