Tue, 16/10/2018, 9:00 amby Beth Newman
The Wallabies have announced they will wear their Indigenous strip for the second time when they take on England at Twickenham in November. Playmaker Kurtley Beale hopeful the jersey could become be worn at next year's World Cup.

The Wallabies will roll out their Indigenous jersey offshore for the first time in a Twickenham blockbuster against England next month.

Australia debuted the jersey in last year's third Bledisloe Test win at Suncorp Stadium but Rugby Australia had been tight-lipped on when the strip would reappear.

After the home Test season came and went, there were suggestions the Wallabies might pull it out in the third Bledisloe again this year, in Japan on October 27.

Instead, they have opted to take it out against their second-biggest rival in what is shaping up as a critical final 2018 Test at Twickenham on November 24.

The jersey was the first of its kind to be worn by any Australian national team and was well-received by fans when it was unveiled in 2017.

That its first outing was followed by a win over the All Blacks only added to the popularity of the jersey, 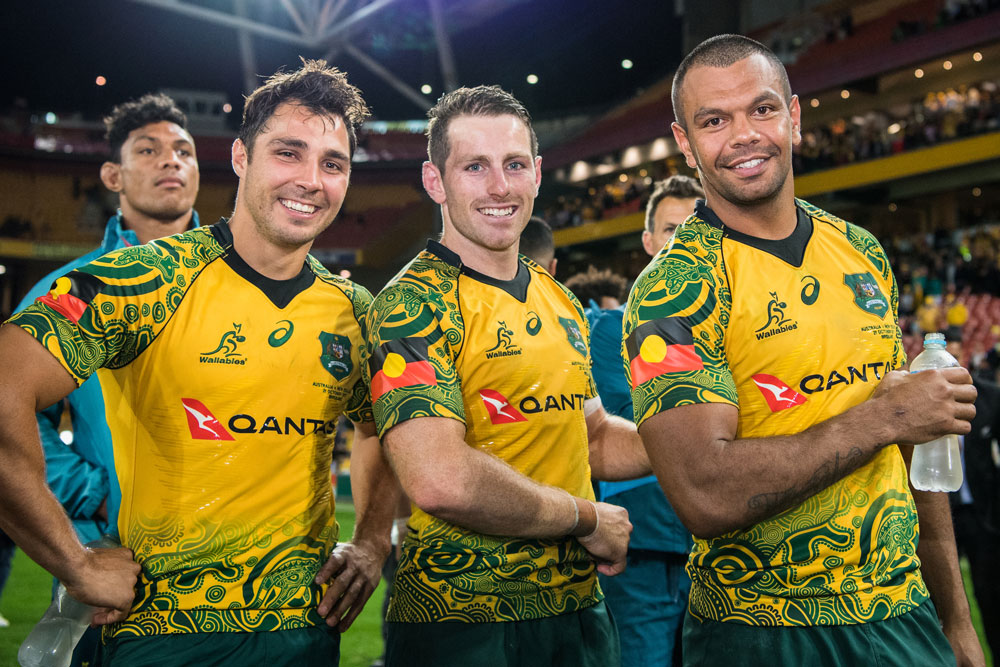 Australia has not beaten England since Jones took over at the start of 2016 but each encounter has been full of emotion, something that is only likely to be enhanced with the addition of the Indigenous jersey.

Walllabies skipper Michael Hooper said the November Test against England was the perfect occasion to bring out the jersey for the second time.

“It is an absolute privilege to wear the gold jersey every time you get to represent your country on the rugby field and having the opportunity to wear the Indigenous design has a special significance.

“The whole team was really honoured to run out in the Indigenous jersey last year to recognise not only the role of Indigenous players in the Wallabies throughout history but as a broader recognition of Indigenous culture and its importance in our country.

“I was pleased that we were able to play in a way that was fitting of the occasion in Brisbane last year and we are very keen to come up with a strong performance again in London at the end of our tour.

“New Zealand and England are two of our closest rivals on the sporting field, no matter what sport you talk about, so I think it’s very fitting that we will play our first two matches in this special jersey against these two teams.”

The Wallabies fly to Japan on Saturday night ahead of their Test against Japan with Michael Cheika set to name his squad for that Test on Thursday.

It is likely that squad will look different to the one that flies to Europe a fortnight later but there's unlikely to be any major surprises.

The Wallabies Indigenous jersey is available to buy at shop.rugby.com.au.