Fri, 25/05/2018, 4:51 amby Beth Newman
An upgrade to Allianz Stadium has resulted in the tournament heading to Spotless Stadium at Olympic Park in 2019. The move announced today by Rugby AU CEO Raelene Castle and endorsed by players Simon Kennewell and Sharni Williams.

The 2019 Sydney Sevens will be moving to Spotless Stadium at Sydney Olympic Park and it might not be the last time the tournament is held in the west.

Allianz Stadium, which has hosted the event the past three years, is set to be knocked down as part of a NSW Government commitment to rebuild the ground, forcing the location to be shifted.

Other venues, including Newcastle, were considered but the growth of western Sydney, and its location in a capital city, tipped it in the Olympic Park’s favour.

Next year is the last in a four-year deal with the NSW Government to host the tournament in Sydney, and it seems that is likely to continue beyond 2019, with western Sydney.

“Certainly we're talking to the NSW Government about where the best venue options are for them and with Allianz going to be off-track for at least 2-3 years, then it opens up those conversations to have be it Parramatta, be it Spotless Stadium again, so all of those conversations we're having with the government at the moment,” she said.

Rugby has often been criticised for neglecting the region and the recent axing of Penrith from the Shute Shield has not helped that view, making this move a critical one for Rugby Australia.

Rugby AU CEO Raelene Castle said she felt this was a chance to really re-connect with Western Sydney and bring more fans to the game. 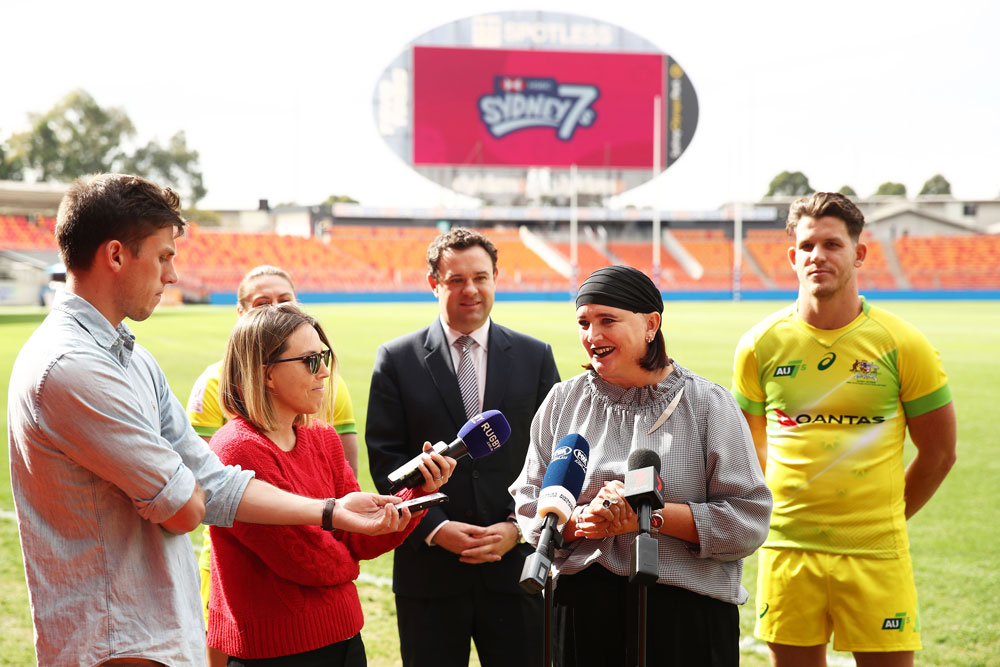 “It's very important, I'm not suggesting for a moment that bringing Sydney 7s here is going to magically fix the challenges that we've got with Penrith and making sure we've got a clear strategy for how we develop rugby into the west, but certainly for the engagement base, the people that like to watch rugby and have a unique and different experience with rugby bringing it here is a really great initiative for us,” he said.

“There is a big Western Sydney movement in Sydney about making sure that we grow opportunities for everyone across Sydney to be engaged and when I said we're now in the middle of Sydney that's the reality of it.

“I'd even view that we double our chances of selling it out.”

The first day of the tournament, which has shifted away from the Australia Day weekend to February 1-3 in 2018, will be free for all spectators as well, increasing the chances

Women’s Sevens co-captain Sharni Williams said it would be a valuable opportunity for the sport to really engage with the community.

“We're up against so many other sports here in Australia and we just want some really good news about rugby.

“We want people to get involved and it's about that community feel as well.

“That's why I started playing rugby was the community just embraced me and made me feel a part of the game and that's what we want to do here, is bring the community into it and make them feel a part of this amazing game of Sevens and get that adrenaline rush that we get out on the field and having everybody so close to the game, people can really sit on top of us and watch us play.”

Spotless is an oval ground, but Williams said that wouldn’t be an issue.

“When you really come in and you sit down, even just being in here, I had a view of 'oh yeah, it's a circle field', but it's going to be a crazy atmosphere.

“It's enclosed, everyone's involved and that's just going to add to the excitement of playing here.

“We've seen so many AFL teams play here, so to think that rugby Sevens could play here, the groundsmen will do an amazing job with the square field and it'll be fine.”

The 2019 Sydney 7s kicks off on Friday February 1, running until Sunday February 3, at Sydney Olympic Park.