by Beth Newman
Israel Folau is in the mix for the John Eales Medal. Photo: RUGBY.com.au/Stuart Walmsley

Folau has topped the medal count, which is voted on by players on a 3-2-1 basis after each Test from Spring Tour to the final Bledisloe, for the third time in just five seasons in rugby, finishing with 260 votes, ahead of Kurtley Beale (166), Bernard Foley (146), Michael Hooper (142) and Sean McMahon (129)

The fullback, who is set to go on sabbatical after this weekend's Barbarians clash, was one of just four players to have won it twice before this season - alongwith George Smith, Nathan Sharpe and current skipper Michael Hooper.

Folau comes off contract at the end of 2018 and has now won a Super Rugby title, played in a World Cup and won three top individual gongs, but he still feels there's more to give.

"Winning a Bledisloe - that’s something that stands out, that loss that we had to the All Blacks in the World Cup was disappointing," he said.

"So those things it’d be nice to tick those boxes but in terms of personal goals and that, I’m happy with how things have gone. 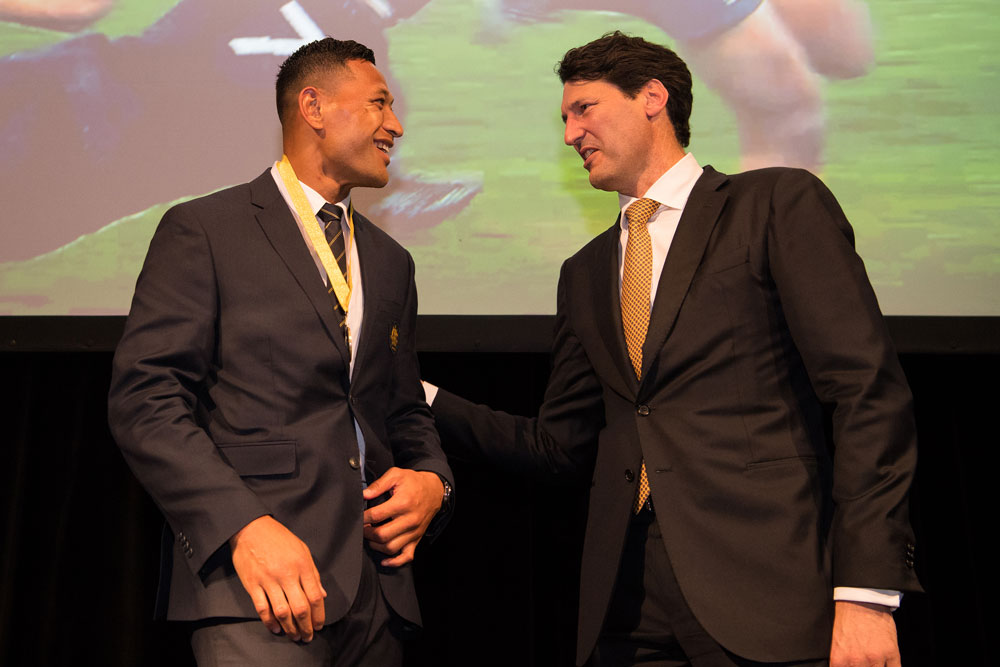 "I’m never satisfied, it’s always about the team and how we can improve and move forward and get better."

Folau trailed flanker David Pocock at the end of the Spring Tour, before a sensational June Series, that included three consecutive doubles for the 28-year-old, put him in front.

Beale's sensational season since returning from England had him right in the reckoning, with the inside back finishing second despite missing half the Test year.

"(Michael Hooper) is always a standout for me, he does all the hard work and I think a lot of people don’t realise the work that he puts in week in, week out.

"I guess I’m a little bit lucky in the sense that KB (Beale) didn’t participate in the Spring Tour last year.

"For me it’s been special to receive this award and be recognised by the guys that you go out with and play alongside, that’s something that I’m very humbled by and you can’t really describe it with words."

Hooper took the fan's choice Wallaby of the Year, going back-to-back with that gong, while 2017 debutant Ned Hanigan was crowned the Rookie of the Year, ahead of Wallaroos' Millie Boyle, Aussie Sevens' Lachie Anderson and fellow Test debutant Izack Rodda.

Chloe Dalton and James Stannard were named the Shawn Mackay Award winners after standout seasons in transition years for both sides.

Liam Wright, a surprise call-up into the Wallabies squad this week, was named the U20s player of the year, beating out Wallabies debutant Jordan Uelese for that prize.

Joe Powell's try that lit up the Brumbies clash against the Hurricanes was handed try of the year.

Women's XVs Player of the Year

Australia U20s Player of the Year

Rugby Australia Rookie of the Year

Fan's Choice Wallaby of the Year

TNT Referee of the Year

Rugby Australia Try of the Year

HSBC Volunteer of the Year