by Beth Newman
Eto Nabuli will replace Henry Speight in the starting side against Scotland. Photo: RUGBY.com.au/Stuart Walmsley

Wallabies coach Michael Cheika might be somewhat indebted to two NRL legends after naming his side to face Scotland.

Winger Eto Nabuli has forced his way into a Wallabies debut, with Henry Speight injured, five years after Andrew Johns and Brad Fittler found him working as a hotel porter in Fiji.

The former Dragon switched to rugby ahead of the 2016 season, after 13 NRL games, making the Wallabies June squad last year but being cut early on in the piece.

Cheika said the NRL pair who stumbled across Nabuli clearly ran into the right man.

“The guy seems to have made his own way,” Cheika said.


“You could do worse than getting those blokes go out talent scouting for you - they've obviously got the nose for good talent.”

Nabuli’s improvement from his debut season to his 2017 year caught Cheika’s eye, with the Reds finisher scoring eight tries from his 13 games this season, including a hat-trick against the Force.

The wings are among the most competitive spots in the Wallabies squad, with Sefa Naivalu and Marika Koroibete overlooked for Nabuli this time around, a selection Cheika said was a reward for his hard work.

“He's been very physical and been working hard so I thought it was a good opportunity to give him a reward,” he said.

“I think he's had that little bit more edge during the two weeks we've been together.


“He's really knuckled down on his knowledge - he's been very enthusiastic as well, some big strong running and I think he's merited the opportunity.

“Also throughout the season, I think his improvement from last year to this year has been excellent and I suppose that's a good form guide to when someone's improving.”

Flyhalf Bernard Foley said Nabuli had been impressive in training.

“I think he really got his mojo for the Reds this year.

“He scored a number of tries, he's a great finisher and he's a big guy.

“Hopefully we can utilise him and get the best out of him on Saturday because he's someone who can be a match-winner for us.” 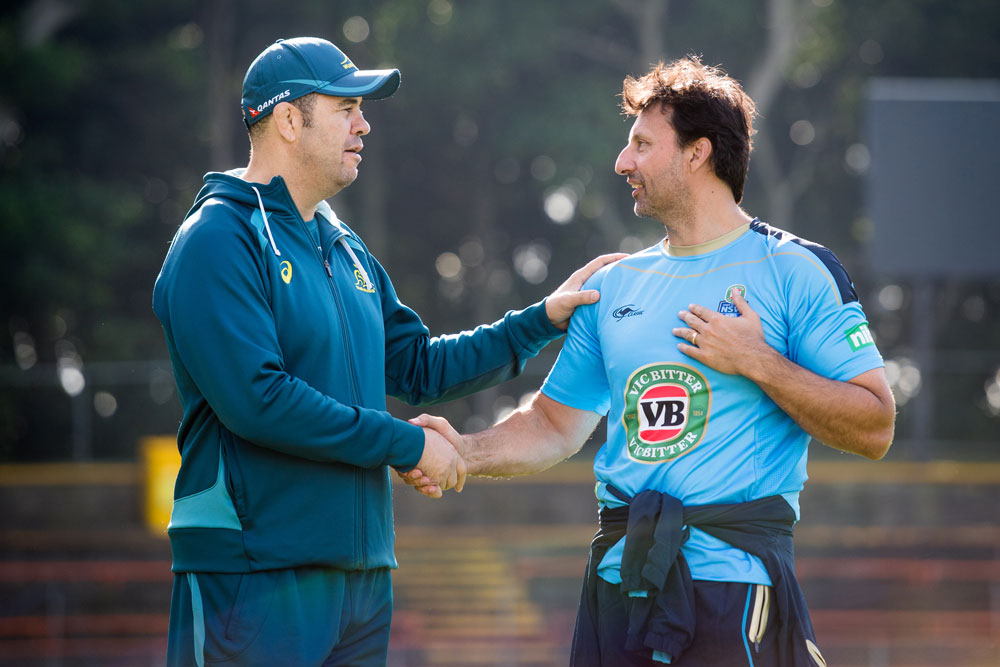 It was a rugby league-themed day for Cheika, whose squad crossed paths with the NSW Blues at Leichhardt Oval on Thursday.

It’s far from the first code cross-over in Wallabies camp, with the side doing an opposed session with the Roosters last year, but it’s rare that their timing links up at Origin time.

“We had a good training there this morning - got to watch the lads train because we crossed over and had meetings,” Cheika said.

“It was pretty good, there was a good crossover of players in the dressing rooms.

“You've got to remember it was a lot of trust there from Laurie (Daley) because there's a lot of Queenslanders in our team, so they couldn't give it all away in one go but they were pretty impressive at training.”

Foley said it was a rare chance to watch how some of their league counterparts go about their business.

“It's good to see how they prepare and how they train, they were out there early going through it.

“It's always good to see a team on top of their game, looking to do something pretty historic as well.”

The Wallabies take on Scotland on Saturday, kicking off at 3pm AEST LIVE on FOX SPORTS and via RUGBY.com.au RADIO. Buy tickets here.