Matt Toomua has taken his coffee obsession global, using a lengthy injury stint to take on a different role at new club, Leicester.

Toomua owns a coffee shop in Canberra and after injuring his ACL in just his second Premiership outing, organised to have an industrial machine at his new club and took on barista duties.

“Since I've been injured I sourced a big commercial coffee machine so each morning around breakfast time I'm making coffees. I think 40-50 coffees a day now, which is good,” he says.

“The guys are loving it. I've got the beans from here, (local coffee shop) the Coffee Counter and we just make it up in the morning. - Matt Toomua

“I don't know if they're just being kind to me, so we'll find out a bit in a few weeks' time if they're still ordering up.”

The 26-year-old has been documenting his injury recovery on Instagram as another way to fill the days until his rugby return, three months after linking up with the Tigers.


Toomua is back in Australia for Christmas, reuniting with wife, cricket and football star Ellyse Perry, just in time for the pair’s first wedding anniversary.

The inside back's Wallabies career was ended, at least temporarily, when he signed with the Tigers and his finale didn’t go the way he had planned, a concussion calling a premature end to his Rugby Championship in August.

Watching on as Australia went through a promising Spring Tour, he admits the desire to don the green and gold has not deserted him, though he will be in England for the next two seasons at least.

“I guess for the time being, I consider myself here at Leicester and here until that contract runs out but I'm not really sure what the future will hold.

“You always want to play for your country so I'd never say that [rule it out] but I was fully aware of the commitment I made when I came here. 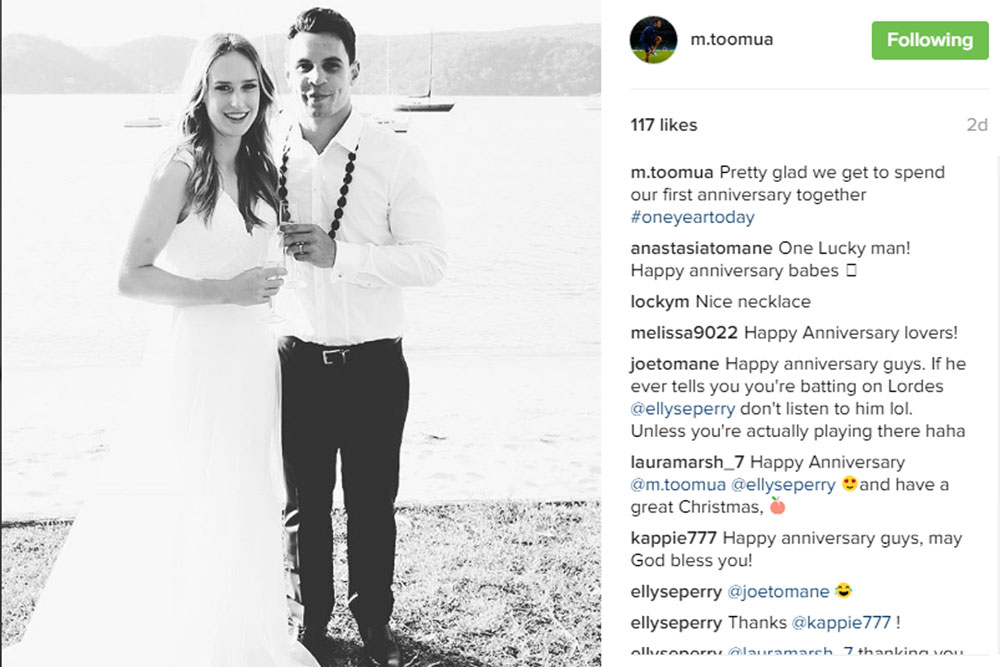 “You watch Australia run out against England and you get a little bit itchy and you want to be there as well, so that desire's still there for sure but it's just a different phase of your life now which I'm enjoying so far."

If he were to come home, Toomua says it’s hard to imagine donning any jersey other than that of the Brumbies, but he’s not locking himself into a plan beyond his current contract, which runs until the end of the 2018-19 season.

“To be honest, if you'd asked me two years ago would I be overseas I probably would've said, ‘No,’ and you learn as you go," he says.

“I'll cross that bridge when I get there.

“The good thing is you've got good opportunities over there don't [you], with good teams.

“The Brumbies always have a special place in my heart as well because that's where I first started so I guess I'll cross that bridge when or if I get to it.”