Queensland and NSW: A rivalry for the ages

The brawling flare-ups of the 1990s and earlier eras may have disappeared but the fierce mentality any time Queensland and NSW meet has not. Has the lustre of the classic “State of the Union” clashes, as they were once dubbed, diminished over time?

The rev-up fanfare in public may have faded somewhat but no way has the meaning receded, says Wallabies great Tim Horan.

It is a storied, intense and lasting rivalry like no other in Australian rugby.

Pre-register for Stan Sport now to watch every minute of Super Rugby AU. The new add-on Sport package is available for just $10 a month with customers able to get a 30-day free trial for a limited time only.

“It’s still the biggest rugby game of the year for Queenslanders,” Horan said of facing NSW.

Friday night’s youthful cast for the Reds v Waratahs showdown at Suncorp Stadium will duel in a tasty scene-setter when Super Rugby returns for 2021.

Many of Friday’s starters weren’t even born when sledges were lobbed over the border like grenades in weeks like this. It was edgy in the 1990s and the aggro wasn’t even solely on the field.

Elton Flatley was not yet 21 as a Queensland five-eighth when he jogged off at half-time at the Sydney Football Stadium only to be deliberately jolted in the tunnel by abrasive NSW flanker Michael Brial.

“I remember how quickly (prop) Dan Crowley was beside me as security for the little five-eighth. There was nearly some biffo in the tunnel but the stronger feeling was we had each other’s backs in matches like this,” Flatley said.

“These matches always meant more and it was elders like Timmy and Crowls who made sure we knew it just as blokes like Tony Shaw passed that down years before.”

Thankfully, those high emotions in the tunnel levelled out at shoving and jersey twisting. Lesser lights and stars enter folklore in equal numbers on interstate occasions like this.

It’s the Friday night that a Will Harrison could turnig his patches of promise as a Waratahs No.10 into a career-changing season or No.8 Harry Wilson could build on his cult status with home fans. Both are just 21.

For every Horan, Chris Latham, Michael Hooper or Kurtley Beale who has dominated an interstate game, there is a Dom Shipperley, Peter Hewat or Ed Quirk who is celebrated by teammates for a one-off match-turning display.

Remember Queensland winger Peter Hynes tangling superstar Lote Tuqiri to a standstill at Suncorp Stadium in 2004 like a ball-and-chain around his ankles? Tuqiri does: “I couldn’t get away from him all night. He had a blinder...and so did Queensland.”

NSW great Simon Poidevin set the bar high on baiting when he famously said: “It was great touring with Queenslanders because it always ensured there were some terrific banjo players in the team."

It was classic niggle referencing the very closely-related banjo players in the Burt Reynolds’ movie Deliverance from the 1970s.

When Super Rugby went professional in 1996, Queensland winger Damian Smith stirred up Queensland-NSW zeal at Ballymore with the most famous punch to miss its target in the history of Super Rugby.

He was sent off for his rabid aggression when attempting to hammer rival winger David Campese’s head into the turf like a tent peg.

“I can't believe I missed something that big,” Smith said and he’s dined out on the story ever since. The Reds won 15-13 with 14 men.

Bar staff that night could barely keep up with the Bundy and Coke orders in the rollicking beer garden behind the McLean Stand that will be no more when it is soon levelled by bulldozers.

No longer were they stand alone events played as an intense two or three-game series against your closest rival for Test selection. Promotion has been neglected at times but sometimes game promotions have backfired too.  Well, it did on the Waratahs in 1999. 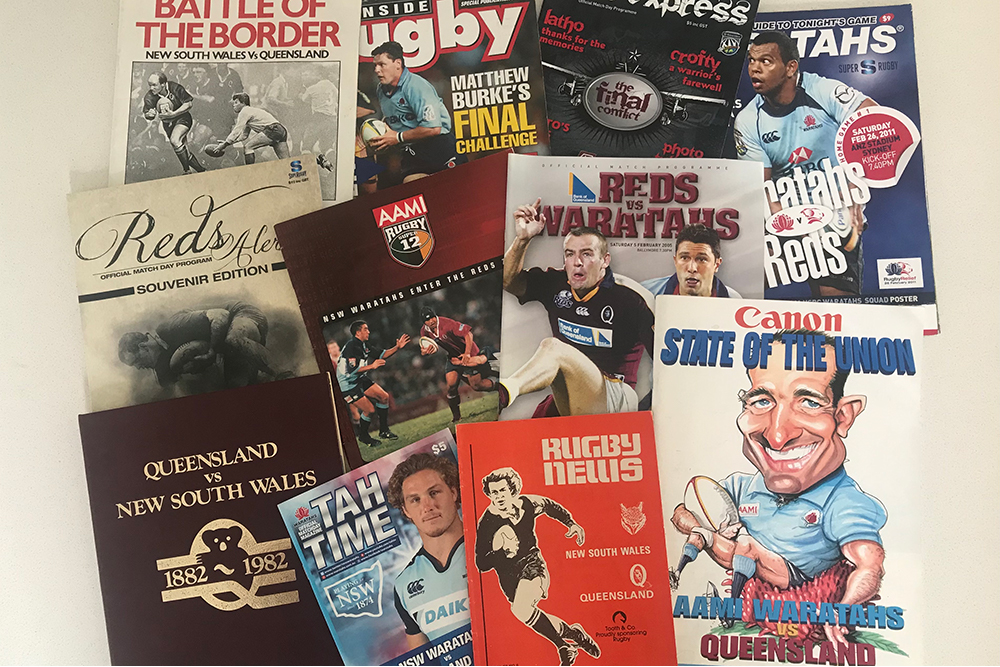 The NSW Rugby Union promotion of the game in Sydney was catchy and personal with an old-style boxing bout poster theme.

It pitted Nathan “Young Gun” Grey against Tim “The Legend” Horan as if the punk was going to knock a “fading” great off his perch. Horan had a mighty game. The Reds spanked the ‘Tahs 30-13. Old bulls fire in these games.

It has never been just another game. Flatley knows coach Brad Thorn and captain, O’Connor will be passing on what these games mean just as custodians like Horan and Crowley did for him.

“I know I made the point in the dressing room on interstate nights that this match meant more to me than a Test match,” said Horan, a two-time World Cup winner.

“It did in terms of playing with your best mates and that the strength of our performance could get more guys into the Test team. It was the passion and history of what the night meant.”

Horan has an interesting take on O’Connor being the right man for captaincy on a night like this.

“I really applaud what the Queensland Rugby Union has done with the Reds to Regions tours, getting out across the state to reconnect with communities and rugby people,” Horan said.

Jordan Petaia milking a cow with the locals in Beaudesert, Hamish Stewart heading back to Toowoomba Grammar, O’Connor captivating youngsters at a coaching clinic at Caloundra and coach Thorn visiting Cherbourg was just the start.

“My old coach ‘Knuckles’ (John Connolly) used to say you weren’t just playing for family and friends but the bloke on a tractor at Roma listening to updates on ABC radio,” Horan said.

“For Queenslanders out bush who have battled floods and droughts I think there’ll be a connection with James, who has ridden so many lows and highs himself.”

Before the Waratahs’ landslide 11-game winning streak over the Reds (2014-19), they dominated for seven straight games between 2005-11. Sharp-tongued Waratah Morgan Turinui didn’t miss his chance to crow during the 2007 win in Sydney when he waved Reds prop Tama Tuirirangi to the sin-bin.

“You're better suited to playing at 3pm than at prime time,'” Turinui needled.

There’s no doubt Queensland rugby fans have longer memories and never forget an insult when it comes from their blue-jerseyed rivals.

For former Queensland captain Alex Evans, it was the insult when NSW refused to play Queensland in 1962.

Former Wallaby Peter Crittle’s superiority complex as NSW Rugby Union president still rankles those of that period. He slurred the Reds as “Super Nine” champions when they won the Super 10 title in 1994.

His Waratahs had refused to travel to Durban because of fears over safety and they missed the final. The Reds did travel and claimed a grand upset in the final over Natal.

In Durban. In 2003, the Reds were ridiculed as the SML Reds as in "Stone Motherless Last" Reds throughout the Waratahs' game-eve interstate luncheon.

Oops. The Waratahs were clear favourites yet copped a 35-23 thrashing for their taunts.

For years, former Reds wheeled out the predictable rhetoric by niggling the “Choker-Tahs” and sports poet Rupert McCall even put it into verse for “those who know that weeding Waratahs is better fun than sex.” Tuqiri is eager to see what sting there is to Friday night and how the underdog Waratahs take it to Queensland.

“I think the guys in charge of scheduling got it right with NSW-Queensland in the first round with more focus on it and the free-to-air TV with Channel Nine,” Tuqiri said. “These are the sort of games that get people watching rugby.

“I believe there is the same meaning as always to these games. It might just be behind the dressing room doors a bit more with the players.

“I really like that Thorny is bringing back that Queensland mentality with the maroon jersey, rather than the red, and the love for it.

“No one is really giving the Waratahs a chance and normally it’s the other way around.

“It will be interesting. There’s always fire and spice to the match-ups.

“I remember playing beside Wendell (Sailor) when he came back to Suncorp Stadium in 2006 as a Waratah not a Red anymore. The crowd really got into Dell just as he gave the crowd a bit.”

The curiosity of interstate rugby in the professional era since 1996 is that interstate dominance has gone from one lopsided era to the next. Queensland didn’t lose a game between 1996-2004 and won five in a row between 2011-13.

Two blocks of NSW dominance shut out the Reds. The 32-5 and 34-3 thrashings of 2014 made the Reds’ major casualties in the Waratahs’ glorious rumble to their first Super Rugby title.

As many dents as big boppers like Tatafu Polota-Nau, Jacques Potgieter and Will Skelton inflicted, the dexterous skill of Beale and Bernard Foley outsmarted the Reds too.

Finally, the Reds rejoiced over a 32-26 drought-breaker at Suncorp Stadium last July.

A 45-12 crash to earth at the SCG later in the season put the Waratahs back on top with the Templeton Cup when 50 points looked a formality at one stage.

Recent history often stings the most and that embarrassment may be fuel aplenty for Fraser McReight and the rest of Reds pack to feed off.

A firecracker like NSW backrower Lachie Swinton is perfectly wired to what interstate night is all about with his thundering hits and abrasive in-your-face nature.

So is Reds halfback Tate McDermott, whose quick tap try got the Queensland win rolling in the corresponding clash last year.

This year may be all about a new broadcasting deal, juggling new competition formats, finding new stars, the new 20-minute red card rule and new upbeat directions for the code.

Wouldn’t it be perfect if a bumper season was ignited by something that’s been around for more than a century...a classic full-on collision of maroon and sky blue jerseys that we can tell our kids and mates about.

The Reds were unloved nine-point underdogs heading to Sydney with a 0-4 start to the season. It was an evenly balanced contest until early in the second half when Wendell Sailor ran 80m, bumped through Brendan Cannon and scored his best try for Queensland. He upstaged all the hype around new Waratahs signing Lote Tuqiri.

The first interstate game at Suncorp Stadium was a memorable one for more than 42,000 fans. The Reds had been slurred as hillbillies in the lead-up by NSW Waratahs coach Ewen McKenzie so payback was sweet.

Those players running off to let reserves get a taste late in the game were even greeted by yells of  ”yee-hah . . . hillbillies” by fans lapping up the theme.  Desperation is measured by the little things…when NSW player Shaun Berne dawdled to diffuse a Reds’ kick, Chris Latham wrenched him up by the shorts and jersey and flung him into touch.

The droughtbreaker. Outside back Peter Hewat was all quality as the unlikely hero. The Waratahs toppled their Queensland foes for the first time in Super Rugby. His two tries and 22 points upstaged Wendell Sailor.

Never out of it. Dom Shipperley’s try on the bell stunned the Waratahs who thought they’d won it.

Halfback Brendan McKibbin went off the plan and hacked a kick downfield. The Reds counter attacked so winger Shipperley could blaze through the defence out wide in a 60m sprint on full-time in Sydney.

2014: Waratahs 34-Reds 3. Brilliant Beale. Two tries and setting up another made Kurtley Beale the star of barnstorming visit to Suncorp Stadium. It catapulted the Waratahs into the finals en route to a Super Rugby title.

The Waratahs take on the Reds on Friday February 19 at Suncorp Stadium, kicking off at 7:45pm AEDT, LIVE on Stan Sport and Nine Gem. Buy tickets here.