Dalton puts country over club to re-sign for Tokyo Olympics

Chloe Dalton knows what it takes to win a gold medal.

She was the glue that kept Australia's golden girls together in 2016 at the Rio Games and kept the scoreboard ticking over with her razor-like boot.

It's why she knew she couldn't return to Carlton in the AFLW for 2021 and opted to re-sign for another season with Australia's women's rugby sevens team.

"When I looked at it, I wanted to make sure that when I get to the Olympics in 2021 I'm the best possible player that I could be, and I don't think that going back and playing another AFLW season and coming back with three or four months to prepare would be enough," Dalton tells RUGBY.com.au.

"I want to be sure, particularly for my teammates, that when I step out on the field I'm as fit and strong as possible and everything that I've been working on makes me the best teammate.

"I don't want to ever go to an Olympics and not be at my peak."

The benefit of hindsight has given her that perspective. 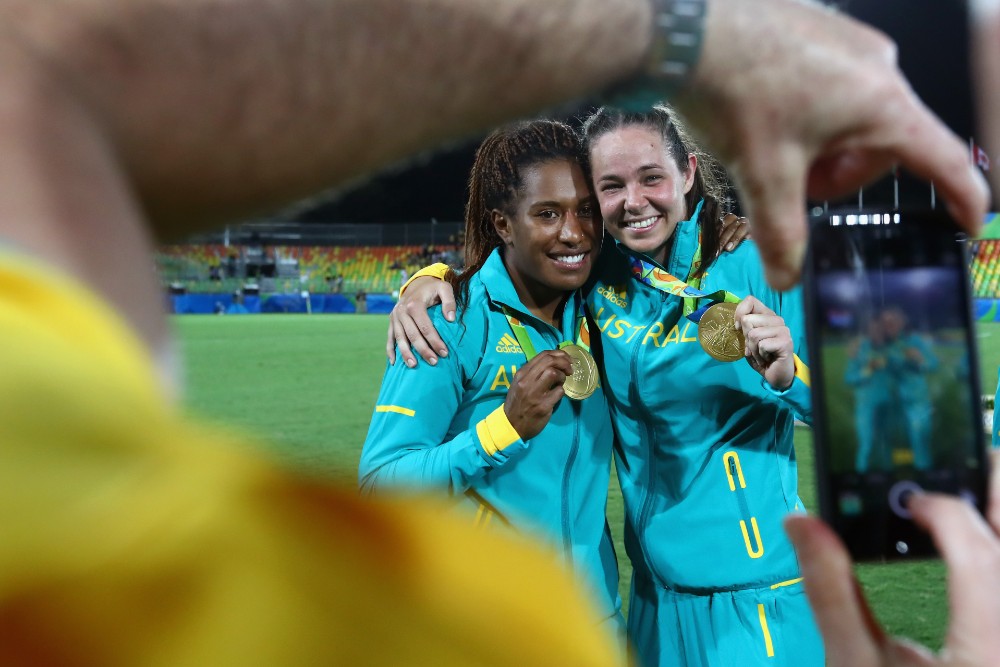 Had the Tokyo Olympics gone ahead as scheduled for 2020, Dalton, 27, believes she would have been racing the clock to return to the form she was in four years ago before she sensationally switched codes to join the AFLW in 2018.

"I'm quite thankful that I have an extra year to get ready for Tokyo 2021 because looking back now I think I would have been cutting it pretty fine to come in off the back of the AFLW season and only have a few months to prepare for the Olympics," she says.

Dalton believes, too, that the extra year the squad has to rediscover their mojo will help their bid to defend their gold medal.

"There's definitely positives in the fact that it's (COVID-19) given us more time to prepare," Dalton says.

"I think for us as a squad it's definitely a positive thing and we've tried to use the last few months where there's obviously been a lot of restrictions in place and other countries may not have had access to the same training and still be able to be centralised like we have, so we've been trying to use that as much as we possibly can and from a strength and conditioning perspective to get ahead.

"Moving forward, coming up against probably our biggest opposition in New Zealand, who have obviously been really dominant over the last year or so, it's going to be a massive challenge but it's working out what we can be doing individually and as a squad to get ourselves up to that level so when we meet them, whatever context that is, how we can beat them."

'STRONGEST IN PAST DECADE': Why Hooper captaincy question is a 'no-brainer'

Australia's Olympic champions have had a bumpy ride since winning gold.

They dominated the 2017-18 season to win the World Series and in the process won the Sydney Sevens without conceding a point.

But since then New Zealand's Black Ferns have beaten everything and everyone in front of them.

At the same time, the squad has gone through a rebuilding process under coach John Manenti, who took over from Tim Walsh who switched to coach the men's side having led them to their Rio triumph in 2016.

Dalton puts the squad's indifferent form down, in part, to the rise of the rest of the world.

"It's a reflection on the other countries as well, the way that they've become centralised programs," Dalton says.

"I know that there was quite a number of them that when we initially centralised that they were still training in camps and on a part-time basis, so I think across the board there's been a massive improvement across the board in the World Series level."

Dalton knows just what it's like to be in a part-time set up.

Joining the AFLW meant that she would no longer be a full-time athlete.

She would work as a physiotherapist before grabbing her boots and joining her Carlton teammates of an evening.

It's what she did for 18 months before re-joining the Aussie Sevens program in the hope of representing her nation at a second Olympic Games.

It's also what has made her appreciate her day job.

"It was really refreshing to go and have a couple of seasons with Carlton in the AFLW because that's a part-time program and it's just six months of the year, so I worked as a physio for about 18 months and would do that during the day and would go to training afterwards," Dalton says.
"I just gained much more of an appreciation for being a full-time athlete because I think sometimes when you have been doing it for quite some time you don't necessarily appreciate what a massive opportunity it is that you can say that that's your job."

For now though it's back to the grind.

While COVID-19 may have bought Australia's Sevens team some more time, they also don't know when their next international will be.

So as much as sevens is a team game, the battle for gold will be played very much in each individuals head as they work towards Tokyo 2021.