Laurie Lawrence has penned three books on inspirational events in Australian sport without ever really detailing his own chapter as a Wallaby.

Lawrence has always been far more than the driven super coach who guided swimmers like Duncan Armstrong, Jon Sieben and Tracey Wickham to gold medals and world records.

Lawrence is now 78 but still a force of nature pumping up the great inside stories to his just-released book, Stuff The Silver, We’re Going for Gold!

When he sheds the “Laurie the Lip” persona as the master motivator on so many Olympic teams, there is his own fascinating inside story to tell.

Lawrence was the Townsville-born halfback who toured New Zealand with John Thornett's 1964 Wallabies as understudy to the late Ken Catchpole.

That’s a brilliant achievement without even considering all his yap came from just one lung.

He lost his left lung before he’d finished high school after childhood health issues and dealt with asthma.

He celebrated the 1963 Brisbane premiership with Teachers but it really took his fine performance for Queensland in 1964’s 30-12 upset of the Junior All Blacks to catapult his name forward as a Wallabies contender.

“I was a rugby league kid from Townsville but when mum took a lease on a boarding house in South Brisbane rugby became my sport at school,” Lawrence said.

He played for St Laurence’s College, the same nursery that would produce Dan Crowley, Mark Connors and Brendan Cannon in the decades to come. He chose Teachers as his club to get in the good books with the reserve grade coach, Ken Southgate, who was the head of physical education at the old Kelvin Grove Teachers’ College.

“We didn't have much, Ken was the phys ed master and I needed a scholarship for college,” Lawrence said.

“I was a young teacher when I was playing for Queensland and the day we beat the Junior All Blacks was one of the best games I ever played.”

Being selected for the 1964 Wallabies tour threw him instantly into the spotlight when the Auckland-Australia game was the big focus before the opening Test.

“Everyone in New Zealand was expecting to see the match-up of Ken Catchpole and Des Connor, the Wallaby who became an All Black,” Lawrence said.

“Every day, there was a full page on ‘Catchy v Connor’ in the newspaper…it was the build-up for the whole game.

“Come to the match and the player’s names were being read out and 40,000 in the ground and on the balconies across the road from Eden Park screamed ‘yes’ to every one.

“It came to halfback. When the announcer said, ‘Ken Catchpole has been replaced by Laurie Lawrence’, it drew only an ‘Aarrrgh’.

“It was biggest cheer of my life in rugby but it wasn’t really a cheer.

“It was wet, Catchy had a bit of a muscle injury he had to look after and had pulled out before the game.

“From the base of the first scrum, I ran and out of the corner of my eye I could see a gap I knew I could take with a dummy.

“I dummied and stepped and fell arse over. 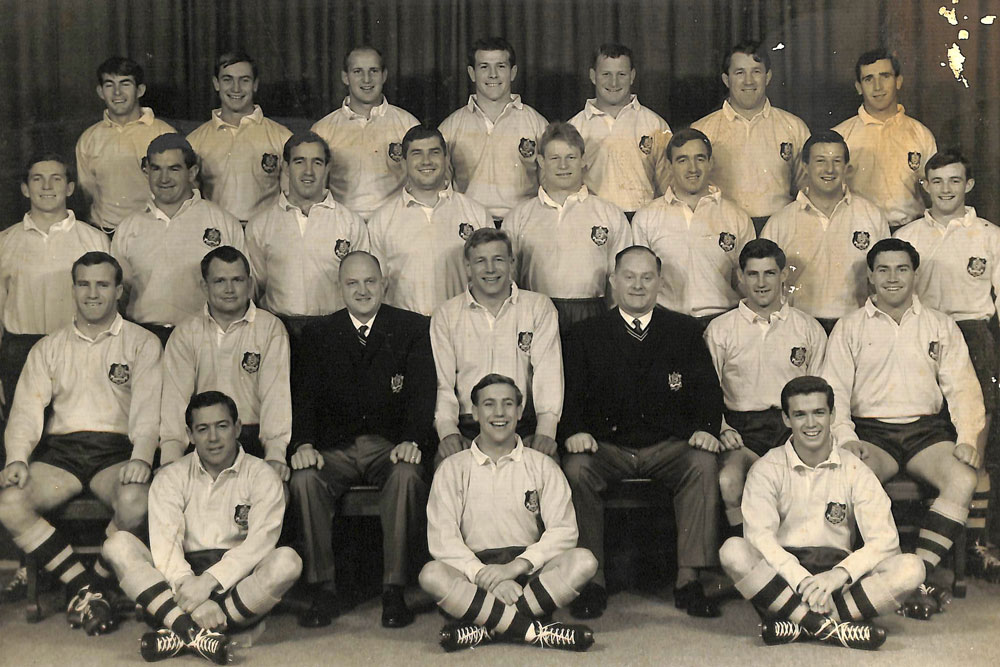 Lawrence played three tour matches and got the taste to set a long-range goal to make the grand 1966-67 tour of Wales, Scotland, England, Ireland, France and Canada.

“I really wanted to make the big tour but being transferred to teach in Toowoomba didn’t work with my health,” Lawrence said.

“I got sick and my breathing was so affected that I was teaching phys ed from a chair in the middle of the school oval at one point.

”He did have a crack for Queensland Country when at Toowoomba Rangers and his prankster streak was already aglow.

“We had a long bus drive to a game and at one stop when the driver was out of sight, we somehow got a Shetland pony on the bus,” Lawrence recalled.

“It was down the back of the bus and we were 20km out of town before the pony whinnied and the driver got wind of it.”

Lawrence resigned from the education department and headed back to the sunnier climes of Townsville to repair his health and join his father, who leased the Tobruk Pool.

Lawrence was still good enough to win a premiership with Brothers in Townsville but his dreams of a prolonged representative career were over.

His career as a swim coach took off and he transplanted his fierce pride in representing Australia to the pool deck.

“I still have my Wallabies jersey…it’s a little tight but I can still fit it,” Lawrence said.

”His latest book title fits his pool and rugby mantra because “stuff coming second” is what he’s all about.

He tossed the Commonwealth Games silver medal of his young swimmer, Helen Gray, onto the railway tracks in Edinburgh in 1970 because he didn’t want her satisfied with less than gold.

“When you played rugby, it was ‘win’ or ‘lose’ and that steeled me in terms of how I thought about swimming,” he said.

“I couldn’t understand kids giving it away when they’d had a taste of fifth or sixth and never won.

“I changed my philosophy over time because you can win in a number of ways…you can touch the end of the pool first or be a winner by doing your absolute personal best.”

Duncan Armstrong was the upset winner of the 200m freestyle gold medal at the 1988 Seoul Olympics with Lawrence in his corner.

He has no doubt Lawrence would have made a fine rugby coach with his method of moulding champions.

“Give him a heart and legs to work with and away he’d go,” Armstrong said.

Lawrence left a big impression when brought in to speak to the Wallabies last year in Brisbane during World Cup preparations.His patriotism was overflowing in his poetic phrases, his love of the Australian flag and what it meant to work for the mate beside you.

Sieben, another of his gold medal wonders from the 1984 Los Angeles Olympics, was beside him to talk through his epic 200m butterfly triumph.

Sieben was fifth on the final turn yet somehow brought all his hard training, preparation and belief to the fore to topple the favourite.

It’s timeless motivation for the power of what is possible…in swimming and in rugby.

Lawrence's former side the Reds take on the Rebels at Suncorp Stadium on Saturday August 15, kicking off at 7:15pm AEST, LIVE on Foxtel, Foxtel Now and Kayo Sports. Buy tickets here. Buy a Kayo subscription here.