by Christy Doran
Irae Simone was one of the Brumbies' best in their 24-0 win over the Force in Sydney. Photo: Getty Images

UPDATE: Even without young gun Noah Lolesio, the Brumbies have once again proved that they are the pacemakers of Super Rugby AU after easily brushing aside the Western Force 24-0 at Leichhardt Oval in Sydney.

The Brumbies' four tries to zero, bonus-point victory saw them (14) move ahead of the Reds (10) on the competition standings to set up a blockbuster match-up between the two sides next Saturday night in Canberra.

The Brumbies lost their Junior Wallabies playmaker during their nail-biting 24-23 win over the Waratahs last week to a serious hamstring injury, but fellow youngster Bayley Kuenzle showed he's more than a capable replacement on his run-on debut.

Kuenzle, 22, was in competition with Lolesio to replace former captain Christian Lealiifano at the start of the year. He might have lost out to his younger teammate, but Kuenzle didn't waste his chance to show what he's made of.

Right from the outset the playmaker looked comfortable.

He was helped by an all-Test front-row and fellow international back-rower Pete Samu, who was excellent all night on both sides of the ball.

But if there was any doubt that the Brumbies would lose anything by the loss of Lolesio, their fears were put to bed by the polished performance of their new No.10.

"We talk all the time about when we expose the young players that they're ready to go, we don't throw them under the bus.

"They're young men and in that position in particular, there's a lot of responsibility to make calls and direct the team around the park, tell guys who are much more senior what to do and he's been working away in the background. As I said during the week, NRC, pre-season it was touch and go there between Noah and BK and Reesjan (Pasitoa), and Noah got first opportunity and took it and BK got an opportunity tonight and took it. It's pleasing that we're getting that development right." 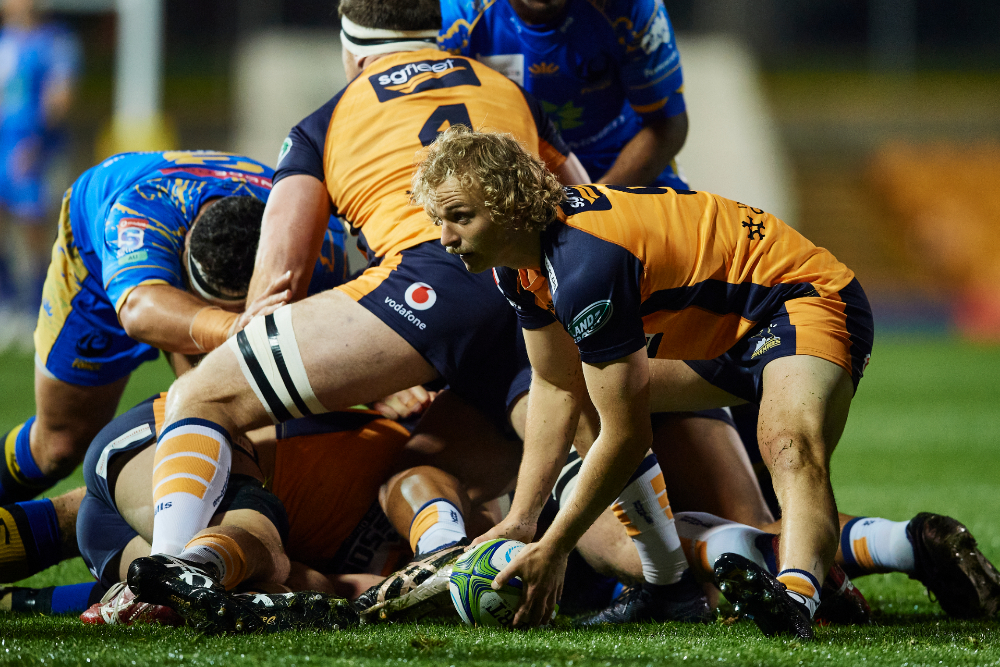 The Brumbies raced out of the blocks on the overcast and cool evening in Sydney scoring twice inside the opening five minutes.

On both occasions, the Brumbies attacked the short-side and the Force's right-edge in defence and both times came away with five-pointers.

The first saw Samu dart down the blindside, where he broke one tackle before finding Joe Powell, who then passes inside to Rob Valetini, who in turn offloaded to Tevita Kuridrani and the bullocking outside centre then sent Tom Wright in to score a beauty inside the opening two minutes.

Two minutes later the Brumbies had the passionate crowd on their feet again, as Samu once again broke away and found Tom Wright, who combined with Joe Powell to send the ever-improving Irae Simone to score. Kuenzle's conversion from the sideline saw the Brumbies skip ahead to a 12-0 lead.

Eventually the Force found a way into the match, but for all the possession and territory that they had, they couldn't crash over from close range.

The second-half followed the same pattern as the first, with the Brumbies scoring in the 43rd minute through flanker Will Miller. But the Brumbies had Simone to thank for putting them in a position to attack, after the former Waratah earned his side their second attacking lineout from a 50-22 kick.

Replacement hooker Connal McInerney put the icing on the cake for the Brumbies as he scored after 65 minutes.

While it was their attack that was firing early, McKellar paid tribute to his side's defence.

"That's the most pleasing part is our defence. We spoke today about fronting up the physicality from a defensive point of view. We had a few tough calls there for a period, where we were under the pump, but we adjusted and sorted out our discipline," McKellar said.

"I don't think we helped ourselves," he said.

"We were resilient, definitely, we just had a chat then. I thought our defence was very stoic, we dug our heels in. It's something you'll always get out of this group, they'll never give up and I think that showed tonight."