The Brumbies have survived a late Rebels flurry to take a 31-23 win in their Super Rugby AU opener.

After a 5-1 start in Super Rugby earlier this year, the Brumbies came into the new tournament with all the expectation on them and early on it appeared they would easily live up to that billing.

The hosts held a 24-6 lead midway through the second half before two quick Rebels tries and a Matt To’omua penalty kick made the margin just one point with 10 minutes to go.

A crooked lineout throw from Rebels debutant Efi Maafu gave the Brumbies late possession and when they had the opportunity, they went to the maul and flanker Will Miller sealed the victory.

Saturday’s match wasn’t as frenetic for much of the night as Friday night’s Reds-Waratahs clash but the intensity grew as the game went on.

A five tries to two final ledger was enough for the Brumbies to claim maximum points and coach Dan McKellar was happy to take the win after four months without a game.

"When we're up there by 18 points could we have put it to bed? possibly, (but) we haven't played in four months," he said.

"If you had've said to me, turn up and you'll get five points three hours ago, I would've taken it for sure.

"Can we get better? Of course we can but was there a lot of good things out there? Yep."

Among those good things was the performance of flyhalf Noah Lolesio, who turned in a man of the match performance against the Wallabies incumbent 10 in To'omua.

Halfback Joe Powell also made a statement with his best performance of the year while McKellar reserved praise for young second rower Darcy Swain as well.

In some ways, the performances threw up surprises as the Rebels dominated in the scrum but struggled to unleash their star-studded attack.

Rebels coach Dave Wessels was full of praise for his young front rowers in Jordan Uelese and Pone Fa'amausilli.

"Pone in his starting debut and Jordy has been out for a long time so for those guys to come back, scrum as wel las they did," he said.

"I mean they're big powerful men you know. That's something we want to add to our game, we've worked pretty hard at, we're obviously proud of the outcomes there."


Brumbies captain Allan Alaalatoa said the scrum, particularly in the first half, was a frustration for his side, who ultimately gave up six penalties at scrum time.

"I think it was a combination of a lot of things - so I think it's definitely something that we need to look at going forward but we managed to get there towards the back end but  by then it's too late," he said.

"We gave away six penalties, from our end it's not good enough.

"The first two were pre-engaged and then the first couple of the scond half we lost our footing there.

"There was one where we pushed them over the ball and we got pinged for that as well. It was kind of hard to know (what) Angus (referee Angus Gardner) was thinking there but I think for us, giving those two away early on really painted the picture for him."

To'omua kept Melbourne in the game with some penalties in the early stages and produced a solid 100th outing.

On the other hand, the Brumbies had little issue opening up opportunities for their outside backs with Tom Wright and Andy Muirhead kicking off each half with a try. 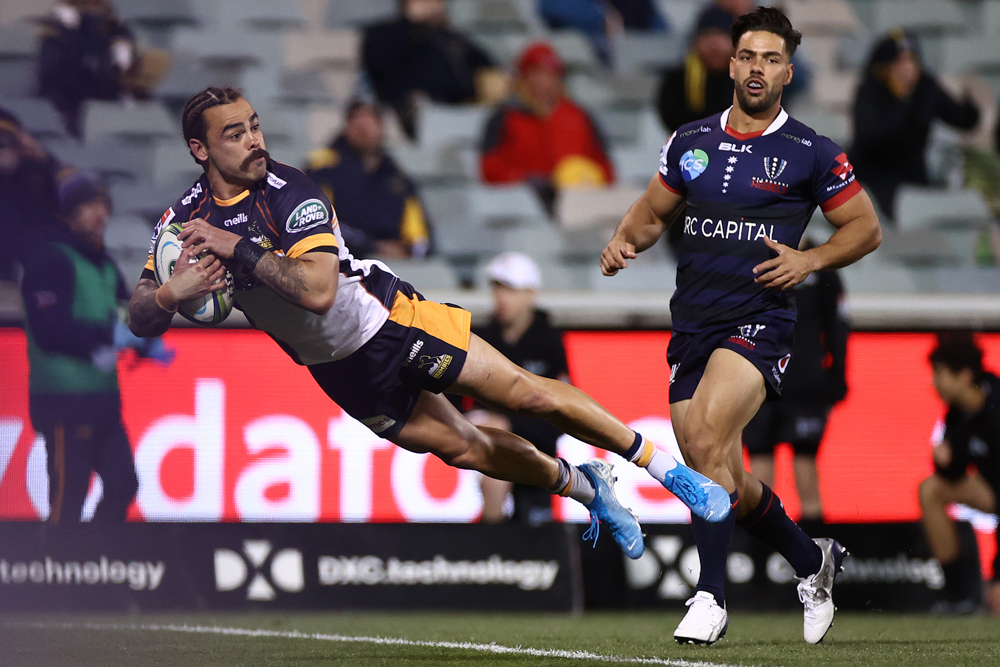 While their scrum battled, their lineout laid the foundations for two of their three unanswered first half tries - a Muirhead running score and a Joe Powell dart off a maul.

The Rebels gave away some early penalties and the Brumbies took less than three minutes to make the most of it.

Winger Muirhead sped through off the back of the ACT lineout, snapping up an inside ball from Folau Fainga’a to score.

The Rebels looked straight to the posts with their first penalty opportunity and Matt To’omua slotted it with ease on his old stomping ground.

Somewhat unexpectedly it was the Rebels who had the early advantage at scrum time, forcing four scrum penalties in the opening 20 minutes and To’omua took the points at every kickable opportunity.

Less unexpectedly, the Brumbies found their second score through halfback Joe Powell off the back of a powerful driving maul.

It was the Rebels who let their discipline slip as the first half ticked on, gifting the Brumbies some territory.

Hooker Folau Fainga’a crashed over the line, bursting through a hole in Melbourne’s defence to give the Brumbies their third try of the first half.

It took just three minutes for Tom Wright to add another for the Brumbies in the second half finishing off a superb Noah Lolesio break.

The Rebels had their own maul try in the 58th minute, pushing their way over from beyond the five-metre line for a Jordan Uelese score.

Five minutes later, Dane Haylett-Petty strolled over the line in open space after the Rebels had peppered  the Brumbies’ defence for multiple phases.

It looked as though the Rebels might be able to steal the victory but Maafu's crooked throw gave the ACT side the final possessions and Miller iced the result.

Wessels said ultimately they left their run too late, a similar pattern to that of their last outing against the Brumbies back in February.

"I just thought we gave them too much of a head start," he said.

"I think probably two things that were frustrating for us is probably our discipline.

"If you giving simple offside penalties and things around halfway that's what they feed off because they kick that to the corner and they maul you, that's how they've always played.

"That's silly by us and I think the other area that they dominated us in the first 40 was probably just around the contact area."

A head clash between Tom Cusack and Folau Fainga’a force both forwards off before he 60-minute mark.

The Rebels will play the Reds in Sydney next week with no clear indication of when they'll be able to return to Melbourne as coronavirus cases continue to spike.

The Brumbies have a round two bye before taking on the Force in round three.