Super Rugby champions Canterbury Crusaders returned to action with their trademark efficiency Sunday when they put away the Wellington Hurricanes 39-25 in New Zealand's domestic version of the competition.

It was five tries to one for the visiting Crusaders, whose performance was blighted only by a high penalty count.

The Crusaders are the dominant side in the southern hemisphere club championship, winning it for the past three seasons, and were again looking the side to beat before Super Rugby was halted by the coronavirus pandemic in mid-March.

They had a bye when the five New Zealand sides launched their own tournament called "Super Rugby Aotearoa" last week, in front of unrestricted crowds.

But despite being sidelined for more than three months they were immediately into their stride and scored inside two minutes against a Hurricanes side desperate to bounce back from their loss last week to the Auckland Blues.

All Blacks wing Sevu Reece dived over in the corner after a brilliant handling move that started from a stolen lineout and swept more than 70 metres downfield with backs and forwards involved.

Thanks to a succession of penalties, the Hurricanes stayed in touch for much of the game and were level at 25-25 with 10 minutes to play, before the Crusaders found another gear and sealed the match with two late tries.

"Our discipline was pretty poor in the first half," Crusaders captain Codie Taylor said.

"We gave away countless penalties and a yellow card and that's something we have to look at. Against New Zealand teams you can't afford to do that."

Hurricanes skipper TJ Perenara said the Crusaders' precision could not be faulted.

"They pounced on opportunities in the first half ... and scored off all of them which is a sign of a quality team," he said.

"In the second half we got ourselves in the hunt, it was 25-all at one point, but we gave away a couple of penalties and ended up at the other end."

The Hurricanes points came from a try to Asafo Aumua while Garden-Bachop kicked five penalties, a drop goal and a conversion.

Two crucial shots at goal from Beauden Barrett late in the match saw the Auckland Blues pull off a rare 24-12 victory over the Waikato chiefs in Hamilton on Saturday.

The two tries to nil outcome was the first time the Blues have won at the Chiefs since 2011, and was watched by a near-capacity crowd of more than 23,000, as Kiwis flock back to rugby stadiums after a virus-enforced hiatus.

Despite the pouring rain, both sides attempted adventurous rugby but in the end it was the steadying influence of Barrett with both tactical kicks and three-pointers that made the difference.

Until the All Blacks fullback took over the kicking duties for the Blues with 16 minutes remaining there had never been more than four points between the two sides but he rapidly extended the margin.

The Chiefs had closed to 12-13 when Barrett broke the game open, first with a drop goal and soon after with a penalty to set the Blues up for their second consecutive victory in the revived competition.

He opened the margin to 19-12 before Mark Telea sealed the outcome with a late try.

Barrett said at times he felt he was kicking aimlessly but when the opportunity came for a game-changing drop goal he had to take it.

"There was nothing on in terms of running with the ball in hand so I just sat back and hit it, and it's one of those things. It's game awareness," he said.

"I've still got a lot to work on and I'm just enjoying playing footy again."

For Warren Gatland's Chiefs it was their second loss after going down to the Highlanders last week when New Zealand launched their own Super Rugby competition after the country declared itself coronavirus free. 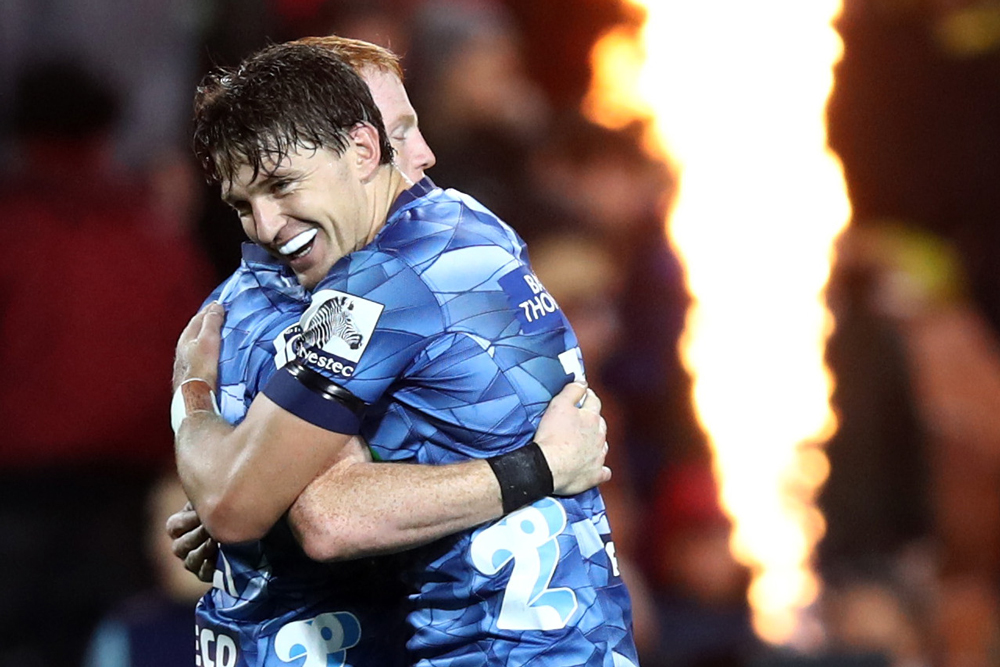 But Chiefs captain Aaron Cruden maintained they were not far off coming right.

"We've had fantastic training sessions and we've been prepared really well but it's just being able to, when the time comes out on the field, being able to execute under pressure."

There have been five new cases of COVID-19 this week but the country was in no mood to let that impact Super Rugby.

Much had been made before the game of the match up of Barrett against the Chiefs' Damian McKenzie, two players who prefer fly-half but are preferred by the All Blacks as fullbacks.

McKenzie scored all the Chiefs' points with four penalties but in the greasy conditions his impact was not as significant as Barrett's telling shots at goal.

Bullocking backrower Hoskins Sotutu scored the only try in the first half for the Blues.