It was only one year ago that Hunter Paisami was sleeping in the backroom of his agent’s office.

It was, as Paisami says, “The size of a family car”.

Not wanted at the Melbourne Rebels – the city he and his family had moved to only a few years earlier from Auckland – Paisami packed his bags and moved into agent Anthony Picone’s office at Kangaroo Point in Brisbane.

“I was a bit ashamed. I was a bit lost at the start when I lost my contract with the Rebels,” Paisami tells rugby.com.au.

“I made the move here with no family, didn’t know anywhere. Had to restart all over again.

“Early on, when I first moved in, I almost gave up after a couple of weeks, I was just going to go home.

“I had no car, nowhere to stay, I stayed at Kangaroo Point at my agent’s, but it just didn’t feel like home, it just felt like I was being punished.”

Mindful not to disturb the peace at his agent’s offices, for weeks the softly spoken centre of Polynesian descent would stay in his room before venturing out to cook and unwind by watching television when business hours were over.

By Christmas 2018, having returned to Melbourne to spend the festive season, he was ready to throw in the towel.

“I went back for Christmas after a mini pre-season with Wests, had a sit down with my parents and, I don’t know, I just thought about it and how bad I wanted it,” Paisami says.

“I just decided to back myself and hopefully play a good season with Wests.”

Now, the 21-year-old – on the back of just six Super Rugby matches – is on the brink of playing for the Wallabies after being selected in Dave Rennie’s Players of National Interest squad last month.

Having made an impression in Brisbane’s club rugby competition for Wests and the resulting NRC under Reds attack coach Jim McKay for Brisbane City, the Samoan-born centre won a spot in Brad Thorn’s squad and has made every post a winner since.

The warning signs of the young man’s explosiveness were there early when he collided with Fraser McReight and broke the Junior Wallabies captain’s hand.

Some “friendly fire” then saw Paisami thrown in the deep end to start his first match at outside centre against the Jaguares after a charge at training led to the rookie dislocating the shoulder of the Wallabies’ incumbent outside centre Jordan Petaia.

As it turned out, Paisami cut the Jaguares’ defence to pieces during his 64-minute effort as he combined spectacularly with James O’Connor, who pre-season told RUGBY.com.au to “watch out for” the rookie.

Rugby Australia director of rugby Scott Johnson issued further praise when he questioned the supposed dire state of affairs rhetoric in the country.

“Look at the 13 for the Reds,” Johnson began, “no one’s heard of him. Jordan (Petaia) gets injured, who’s the shining light of Australian rugby, and we’ve unearthed another one.”

After just six matches, two of which came from the bench, Paisami had the most post-contact metres (161) in Super Rugby by any centre in the competition and was equal along with Rebels centre Billy Meakes and England international Joe Marchant for tackle busts (16).

Not bad for someone who didn’t expect to be playing professional rugby for at least two years.

“I thought I’d have two to three years playing club footy with Wests, before I get back to a professional team either here or overseas in Japan,” Paisami said.

Now, following a couple of phone calls from Rennie, he could be eyeing up a debut for the Wallabies later in the year if plans for an “inbound” or “outbound” tour of New Zealand against the All Blacks gets the green light. 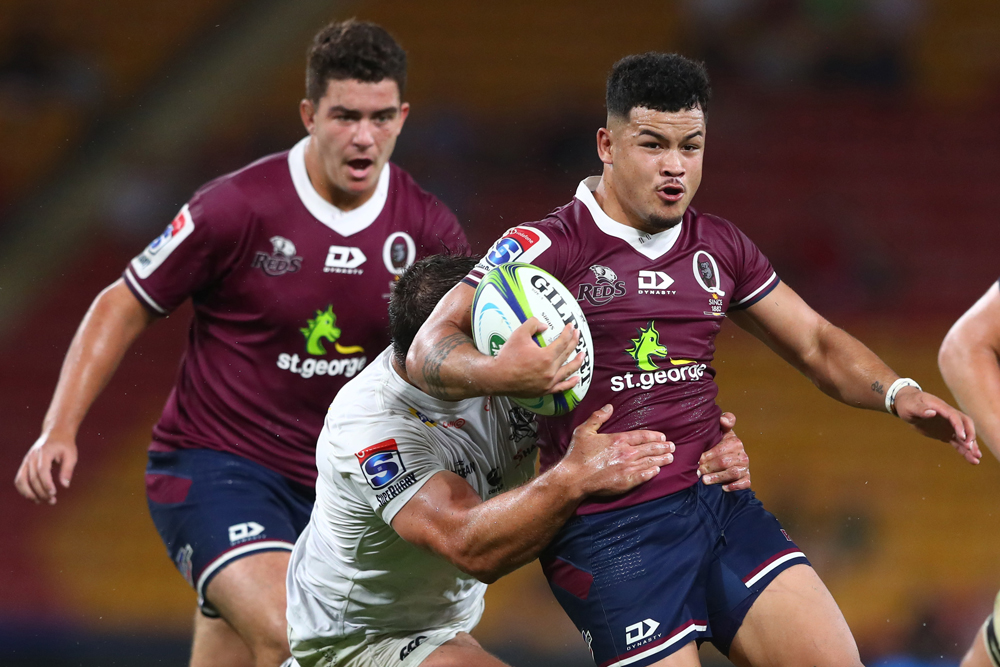 “I was pretty shocked when I first got his (Rennie’s) text,” Paisami said.

“Then I got a phone call and I thought it was a prank. He just called me and asked me how I was and how my injury was. He just said keep training well and he reckons I could play Test footy this year.

“The second one was more of a feedback session and what he wants to see of me.

“What he likes of me is my explosiveness for my size and my running lines, and what he wants me to improve is repeat efforts, don’t die away from the game, keep going, just getting more fit.”

Twelve months ago the departure of Samu Kerevi was a devastating blow for Australian and Queensland rugby.

But with departure brings opportunity and with Petaia and Paisami emerging in Queensland, Rennie has another two exciting young midfielders to pick from.