This week could have been a significant one for the Brumbies had things gone to plan in 2020.

Set to be the final regular round of the 2020 Super Rugby season, the ACT outfit were drawn to take on the Sunwolves and had their early season form continued, this week could have been spent talking about the playoffs and their spot in them.

Instead, the Brumbies took a different kind of step forward at training today, in their third week on the track amid the longest preseason many of them have had in recent memory.

As of Monday, the Brumbies were able to train in groups of 20, up from 10 in the past fortnight, and a graduation into contract drills has begun.

Instead of preparing for their final regular season match, the Brumbies were on Monday running the infamous Bronco test and ensuring their fitness hadn't dropped in isolation.

Scrumhalf Ryan Lonergan took out the backs section of the test, finishing the 1.2km shuttle test in 4:30, just beating out fellow no. 9 Joe Powell.

Jahrome Brown, who returned to training last week after a fortnight in quarantine after travelling from New Zealand, topped the forwards group.

Lonergan said he hadn't thought too much about the sliding doors element of the season, just

"I hadn't really thought about it too much, which I suppose is a good thing because you don't want to just dwell on how we haven't been playing or whatever but to be honest, it hasn't really worried me too much. I just take it as it comes and when the season starts it'll be a good day for everyone.

Lonergan was quick to play down his fitness win as well but admitted it was good to be at the top.

"I just beat Joe. It wasn't the greatest, it was pretty windy and I think that held us back a little bit," he said.

"A couple of boys out so I don't know how long I'll hold the record for but it was nice."

Monday was the first day the Brumbies were able to begin any kind of semi-contact drills, using tackle bags as intermediaries.

On Wednesday, they'll step it up and Lonergan said he was expecting to feel the impact of that step up pretty quickly. 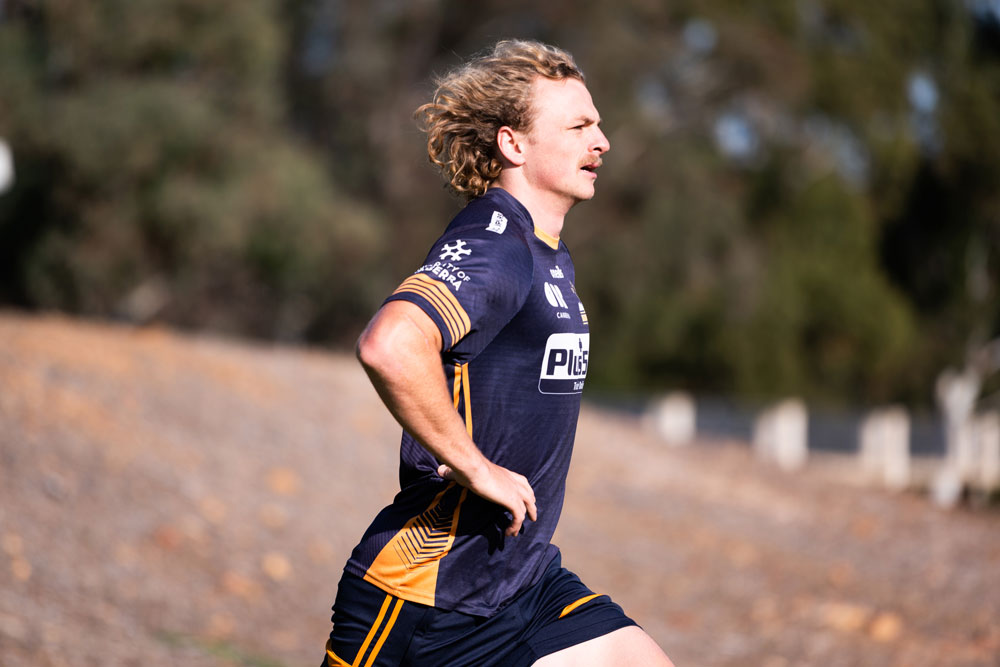 "We hit each other on the pads so it wasn't live contact but we could do pad work so that was the first time we've been able to do that," he said.

"I think there's going to be a couple of sore bodies tomorrow because we just haven't had any impact on our shoulders for so long.

"So it's good to be gradually working through it because otherwise it can lead to a couple of injuries and stuff if you go straight back into live stuff so I'm sure we'll build up to that soon or when the rules change."

Another big step that it is hoped will be taken this week is the news of the Super Rugby Australia competition officially being finalised.

While there are still hurdles to clear, including Rugby Australia's negotiations with broadcasters and finalising the participation of the Sunwolves and the Force, an announcement is expected in the next fortnight.

That competition is slated to begin on the weekend of July 3 and 4 and Lonergan said simply having a possible date in their head was a big boon for training.

"I think that's one positive thing that we've got now," he said.

"So, I think that's given everyone a bit of a boost and light at the end of the tunnel."