The postponement of the Tokyo Olympics has seen the "hard decision" to release Aussie veteran Jesse Parahi from his contract after almost a decade in the sport.

Parahi is the fifth-most capped Aussie Sevens player in history, having notched more than 50 World Series appearances, and he captained the Aussies at the 2018 Commonwealth games.

The tireless forward has spent his professional rugby career with the Sevens bar a brief stint with NRL side the Wests Tigers in 2015.

Scott Bowen, sevens program manager, said the development and form of players like Lachie Anderson, Tim Anstee and skipper Nick Malouf had led to a tough call being made on veteran Parahi. 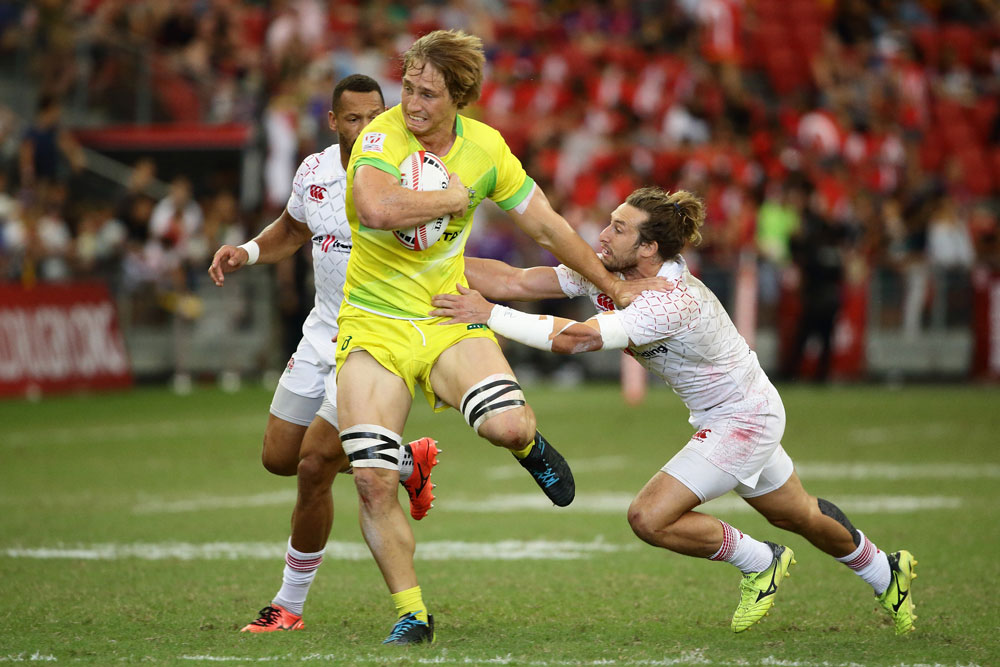 "It's a hard one but looking at some of the progress of some of the other players coming through the squad - Lachie Anderson, Nick Malouf who have been consistent starter,s Joe Pincus has really started to emerge, Dylan Pietsch, even Tim Anstee, though he hasn't played a lot this year because of injury.

"We looked at the upside for those guys ove the next 15 months with the Olympics postponed.

"It was a hard decision on Jesse but I think at this stage some of the other guys, in 15 months, they are just going to be moving forward and starting to reach some of their best footy."

Bowen paid tribute to Parahi, who has been a stalwart of the Sevens side for the better part of a decade and said he was excited to see Parahi be able to devote time to his fledgling business, Sense Rugby, a program set up to help children with some developmental delays get involved in rugby.

"Jesse has been such a big part of the Sevens program playing his 50th World Series tournament in Sydney, the Rio Olympics, captaining the team at 2018 Commonwealth Games, being a part of teams that have won in Sydney 2018 and Japan in 2012, he will be hard to replace," he said.

"We ultimately wanted to make a decision which is fair on him given the Olympics is now 16 months away, his wife has done an outstanding job in establishing their business Sense Rugby which I am sure he will now be able to assist even more."

More changes to the squad are expected as the year goes on, with the bulk of the squad's contracts expiring on August 31.

Youngster Jeral Skelton is also set to leave the program to join the Rebels, with the potential of playing in the upcoming domestic Super Rugby competition.

Skelton had signed with the Rebels for 2021, with hopes to fulfilling his Olympic dream and then having a crack at XVs but the rejigged schedule meant he couldn't do both.

While the coronavirus pandemic has put a financial strain on Rugby Australia, Bowen said squad changes were more about planning for the rescheduled Olympic campaign.

"I think definitely there was always going to be a significant change in the squad post Tokyo 2020, as it was four months away, and we had the reality of starting to plan for the Paris (20224) cycle," he said.

"With the extension of another 15 monhts, it allowed us to have a look at the squads and we knew there was going to be challenges not only financially but the need to make some decisions..

A number of key guys and girls are off contract this year and they're our priority players to try and re-contract because we see them making up the bulk of the squad for selection in what is not Tokyo 2021."

In a post on Saturday night, Parahi expressed his gratitude to the program and reflected on some of his career highlights.


"This week, exactly 10 years after finding out I'd be going on my first @aussie7s tournament, I found out that I had played my last. It's been a wild ride that has taken me around the world, to 2 Commonwealth games and an Olympics," he wrote.

"The highlight for me was all the awesome people I got to meet along the way and I look forward to catching up with you all down the track! I have so many people to thank for making this happen but none more so than my wife and daughter, my parents and my family.

"I am going to truly miss running out in that jersey with some of my best mates but I am excited for whats (sic) to come."

The shape of the Sevens program moving forward is not yet clear with discussions around possible decentralisation.

Australia's Sevens squads have been based out of Sydney as a national group since 2014 but before then squad members trained in their home states and came together for tournaments.

Bowen said they were expecting to have some greater information about the squads' future in coming weeks after the appointment of Rob Clarke as interim CEO.

"We haven't as yet. Rob Clarke has just taken over from Raelene Castle and over the next couple of weeks he'll be able to have some time to understand the business as well and hopefully have some conversations around the future," he said.

What we've been saying to players and staff and senior management is we do have two teams that are heading to the Olympics, one of of them defending a gold medal and the progress we feel we're making is really positive and our men's team are a genuine medal chance.

"We're hopefully organisation will look at how we can look to try and give our teams the best chance to be successful in Tokyo."