Waratahs coach Rob Penney says Friday night's 29-17 win over the Lions was a "step in the right direction" for his side in 2020.

This wasn’t a perfect win for NSW by any means, with some ill discipline costing them at times, but some electric attack showed the potential of a young group desperately needing some  confidence.

The Waratahs jumped out of the gates with two tries in the opening 10 minutes and by the 18-minute mark they had made their lead 16 points.

Two missed chances at penalty kicks that would have iced the match kept the hosts under pressure but a 77th minute Tetera Faulkner try ensured this wouldn’t be another heartbreaker for Australian rugby sides.

The Waratahs attack was enthralling on Friday night but Penney was as pleased with his side's work on the other side of the ball after conceding some big scores earlier this season.

"I’m really self-critical, there lots of elements were really really pleasing...the growth in defence, we've been very leaky on that side and there was massive improvement tonight, " he said.

"And being able to utilise the ball and often trying to seeking space and find that space wherever it is.

"The boys had the confidence and belief and really proved that they are a very capable rugby team, which was nice.

"We're nowhere near where we need to be yet but it's a great step in the right direction."

Flanker Michael Hooper had one of his best games of the year, generating attack and halting the Lions in defence, with an enormous 17 tackles and three turnovers 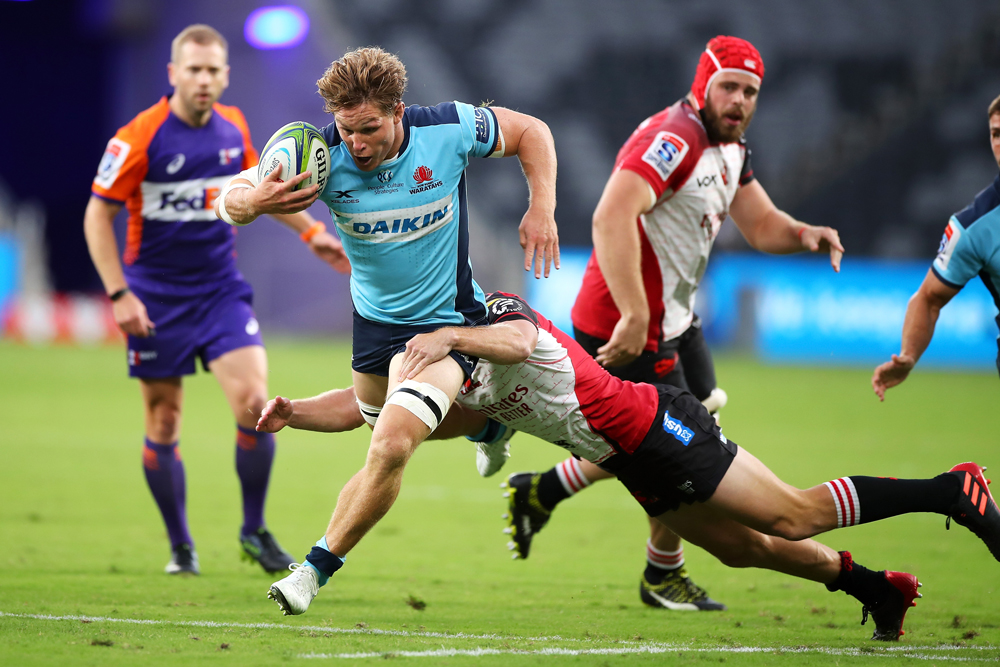 Flyhalf Will Harrison had his breakout Waratahs match on a night that will give him a timely dose of confidence, playing flat and making the most of some forward momentum.

Penney saved some special praise for his young playmaker post-match after the 20-year-old's baptism of fire in Super Rugby finally reaped rewards.

"Will, his mental toughness, resilience, call it what you want to go out and perform like he did today on the back of a couple of tough performances just shows the level and depth of his character which is great for the future," he said.

"Doesn’t mean he’s a finished product yet but it's a great comeback for him from where he was maybe last week."

NSW lost Jake Gordon and Rob Simmons to injury concerns before half-time but Penney and Simmons spoke optimistically about their chances of facing the Chiefs in a week's time.

Gordon was forced out of action in the opening 20 minutes with a hamstring concern before an awkward lineout landing saw captain Simmons exit before half-time.

"Fingers crossed that it's fine and maybe miss Sunday training and we'll be fine next week," Simmons said, sporting a moon boot in the post-match press conference.

"This doesn't look great but it's all precautionary, we'll find out tomorrow where we really are."

Gordon's replacement was just a precautionary move, Penney said, but the scrumhalf would have scans on a tight hamstring over the weekend.

"My understanding is and the word from the medics was we've got to get him off because he's had a tightening of the hamstring and they were really concerned that if he kept going and stretched it would ping and it might be a much more significant," he said.

Rookie prop Angus Bell showed some pace with a fourth minute try, collecting an offload from Michael Hooper to score.

The Waratahs found themselves a man up after a yellow card to Lions lock Ruben Schoemans, after he made contact with the head of NSW captain Rob Simmons 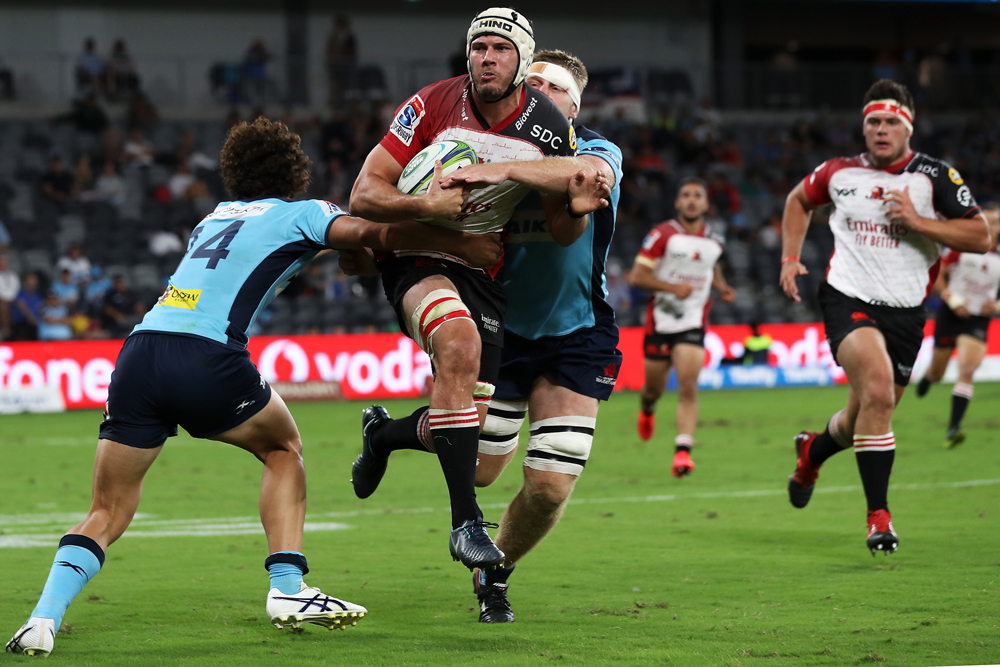 Simmons cleaned out Schoeman in a ruck and the South African retaliated, pushing a closed fist against the side of Simmons’ face.

Referee Angus Gardner reviewed the incident and deemed it a yellow card.

It was Bell who set up the Waratahs’ second try in the 10th minute, slipping through the defensive line, but this time he was stopped in his tracks by a Lions defender.

A long-range Michael Hooper pass from the next phase, put the ball in the hands of Robbie Abel who had backrower Lachie Swinton to score again.

The forwards were feasting as the first half went on but it was the try line they were eating up.

A rapid fire offloading chain saw a Karmichael Hunt pop a pass over the top to Jack Maddocks who found Jack Dempsey on the edge for the Waratahs’ third in 20 minutes. 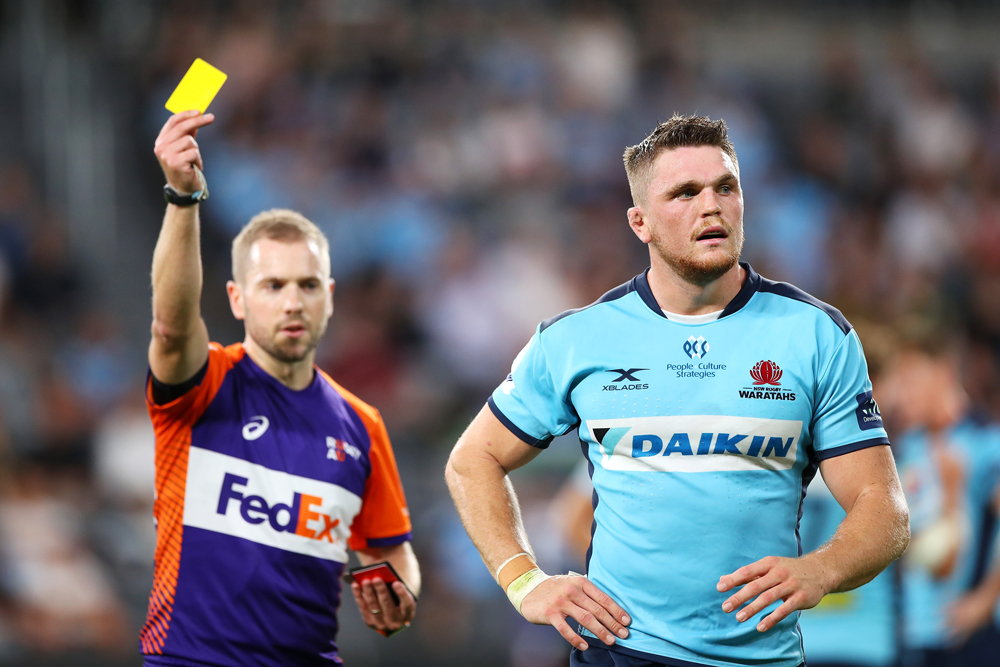 The Waratahs were dealt their own disciplinary blow in the 24th minute after Swinton was yellow-carded for a no arms, late tackle.

It didn’t take long for the Lions to make the most of their advantage that time, with a driving maul try in the 24th minute finished by Marnus Schoeman.

As both teams returned to their full complement, the scoring dried up and the Lions began to try and build some pressure in attack.

The second half began similarly and it took a Hooper pick up and near instantaneous offload to sparked a spectacular chain of attack that resulted in a debut try for James Ramm. 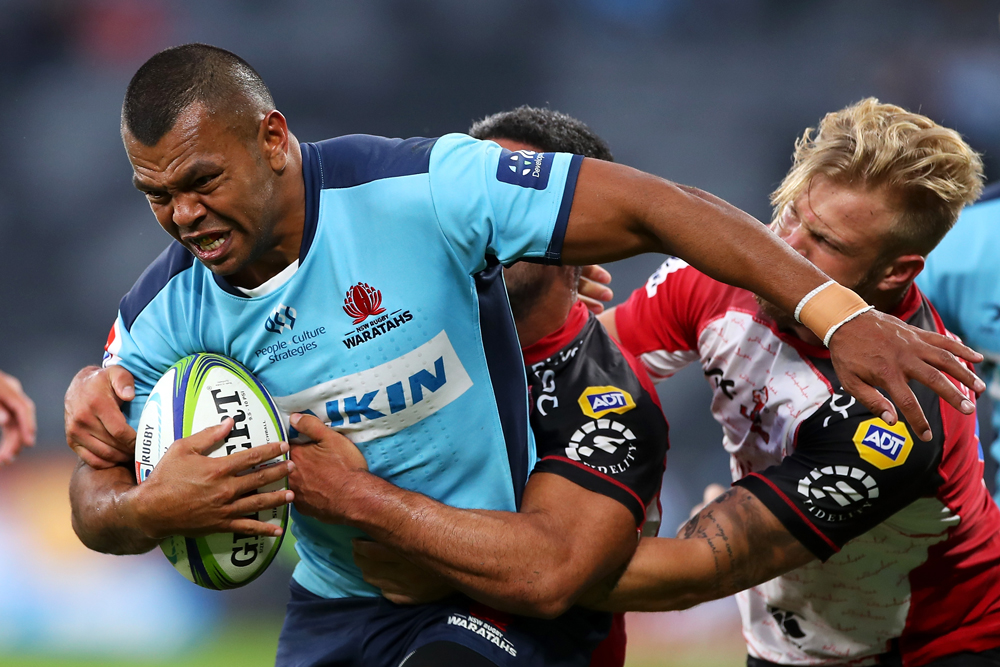 Kurtley Beale took over the kicking duties after Harrison returned an early 2-from-5 record but Beale missed two straightforward penalty kicks that would have eased pressure on the Waratahs.

Penney said the low kicking percentage was a little concerning but backed the pair to improve.

'KB hasn’t had shots at goals for a wee while, he's practising but they just weren’t working for him tonight," he said.

"He's an experienced footballer there to take over the duties, you'd have faith in him nailing those normally and I think Harro went off the posts, got the first few early but missed that one in front  and that's a young fella learning to be consistent I guess."

Beale also replaced Harrison at 10 when the youngster was replaced in the 70th minute with Jack Maddocks shifting to fullback.

Hooper launched an attack from their lineout to set Tetera Faulkner up with the match-sealing try, off a quick Mitch Short ball.

Gordon exited the game early with a suspected hamstring injury, replaced by Mitch Short in the opening 20 minutes.

Rob Simmons followed Gordon to the bench just before half-time, hobbling around the field and attempting to play on but unable to continue.

The Waratahs host the Chiefs in Wollongong next Friday night, in a double header with the relocated Sunwolves-Brumbies clash while the Lions face the Rebels in Melbourne