Australia's men's Sevens team want unleash some of their pace weapons in next week's LA Sevens.

Former Rebel Stu Dunbar and Junior Wallabies back Angus Bell will both make their debuts in the American leg while speedster Rod Davies returns from an injury.

Davies and Trae Williams have struggled to find space in their tournaments thus far and a speedy X factor has eluded Australia's men.

Coach Tim Walsh said another of their quick men, in Maurice Longbottom, would be key to unlocking that duo.

"We've got attacking weapons all over the field so if you've got Moz (Maurice) Longbottom, one of the most experienced and threatening attacking players. so if you can draw defenders onto him and then it unleashes the speed," he said.

"Same with our power runners. You've got Nick Malouf, Joe Pincus and Lachie Anderson, you've got them taking it through the middle and drawing in defenders, then that obviously leaves space outside as well.

"We would like to see them get in more space and it's also us to educate them on how to get themselves into that position as well and that's probably where Trae's really learning and we do hope that's going to be the case, we hope we're going to see Trae lighting up the grass and hitting some top end speed.

"Same with Rocket (Davies) -Rocket's just had limited opportunity actually on the field as has Trae. We just need to have our strategies around how to get it to them and how to get it into space so that's what we'll be hoping to achieve in LA and Vancouver."

Skipper Malouf said that was a real focus among the squad.

"I think that's something we haven't had in the last couple of years is someone with genuine gas," he said.

"The squad's slowly trying to adapt our game play to release guys like Rocket and Trae.

"For us, it's about guys in the middle like Moz tying up as many defenders as he can and then flattening up and giving opportunities to those guys with pace out on the edges."

Australia will blood youngster Bell and his more experienced counterpart in Dunbar, with Walsh saying both have different strengths. 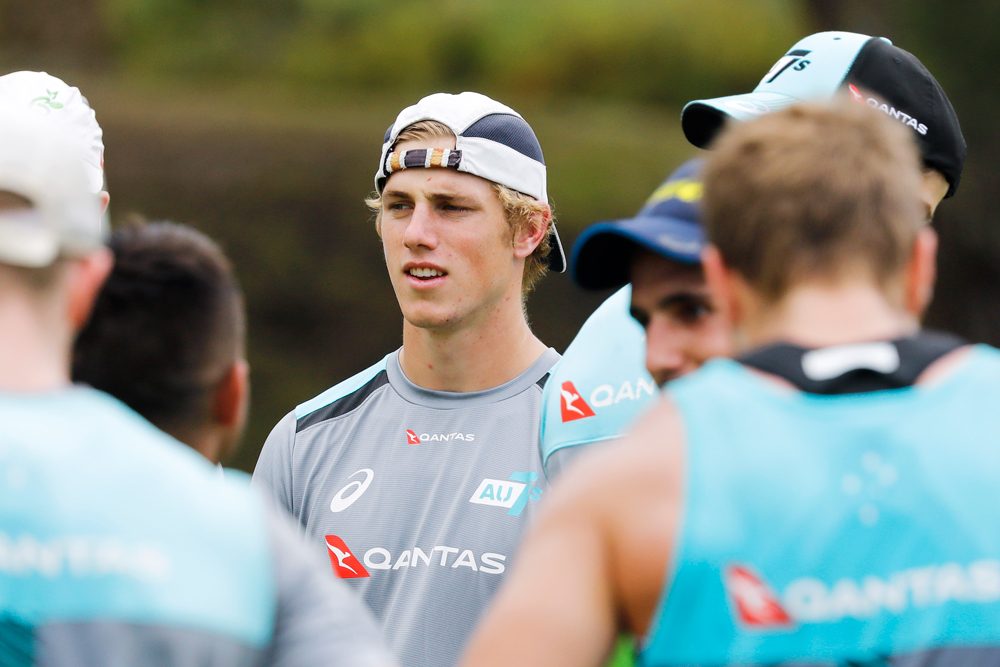 Angusis  a young fella, I think he's got tremendous potential in rugby, Sevens or XVs, so really excited to give him a shot," he said.

"I think he's got all the skills - he's got speed, he's got size, really good awareness and great skills to be able to execute it.

"Stuey's got a bit of maturity on his side, really good understanding of the game, can pull the strings and conduct.

"Despite him being on his debut, I think he's got a level head on him, two very different players in different stages of their career but both definitely earned their touring spot and their debut in LA.."

The World Series event will return to a more familiar format in LA, with quarter-finals included in the two-day men's standalone event.

Both Hamilton and Sydney abolished the quarter-final stage to condense the men's and women's concurrent events into two days.

Australia will take on Scotland, Samoa and the USA in the tournament, which kicks off on March 1 AEDT.

The LA Sevens kicks off on Sunday March 1, running until Monday March 2.

6:57am - Australia vs Scotland

Wallabies must beat Pumas by 101 to claim Tri Nations. But there's some other recent history they can end