A rejuvenated France have held off England to start their Six Nations with a bang in a 24-17 victory at the Stade de France and give new coach Fabien Galthie a confidence-boosting debut.

Les Bleus, who were 17-0 up at the interval on Sunday, held firm to prevent an embarrassing second-half collapse as England sprung into life around the hour.

France captain Charles Ollivon led by example with two tries, one of them debatable, and Vincent Rattez also went over, with the other points coming from Romain Ntamack's boot.

England threatened a comeback after falling 24-0 behind, with two Jonny May tries converted by Owen Farrell who also slotted a penalty, but it was too late for the World Cup runners-up in their first game since their final defeat by South Africa in Japan.

England coach Eddie Jones had promised his team would unleash "brutal physicality" against the French, but they failed to deliver, the absence of Billy and Mako Vunipola as well as Manu Tuilagi's early substitution being clearly felt.

Quick on their feet and brilliantly marshalled by halfback Antoine Dupont, France, with only one player over 30 in one of their youngest ever squads, put England on the back foot and defended with discipline and ferocity.

England lacked impact on the gain line and made several handling errors in a worrying display.

Rattez, drafted in on Saturday after Damian Penaud sustained a calf injury, touched down after driving through two England defenders following an initial break from winger Teddy Thomas.

Tuilagi's replacement by Jonathan Joseph did little to help England on the gain line and things got worse for the visitors when Ollivon made a run to the line after collecting a kick ahead.

England had stopped playing, believing the French captain knocked the ball on before a one-two with Rattez, but the TMO ruled the try should stand and Ntamack converted to open a 17-point lead.

It was the first time England had failed to score a point in the first half of a Six Nations match since 1988, and their biggest deficit at the break since trailing Ireland 23-3 in 2007.

After an early spell of domination in the second half, England conceded another try, Ollivon going over after collecting Dupont's offload following another fine break by the halfback.

They hit back when May touched down after beating Thomas to the ball following a long kick by Ben Youngs and the winger evaded three tacklers to scorch over again, both tries converted by Farrell to give England hope.

The French stood firm, however, and can now look forward to a game against Italy next weekend with confidence while a wounded England travel to Scotland.

Johnny Sexton scored all Ireland's points to give coach Andy Farrell a 19-12 victory over Scotland in his first match in charge after a nail-biting Six Nations encounter at Lansdowne Road on Saturday.

Sexton scored a try and kicked the rest to take his Test tally for the Irish past 800 points.

However, the hosts got out of jail as Scotland missed a host of chances, the most glaring when captain Stuart Hogg dropped the ball going to touch down for a try.

The loss leaves the Scots without a win in Dublin since 2010. 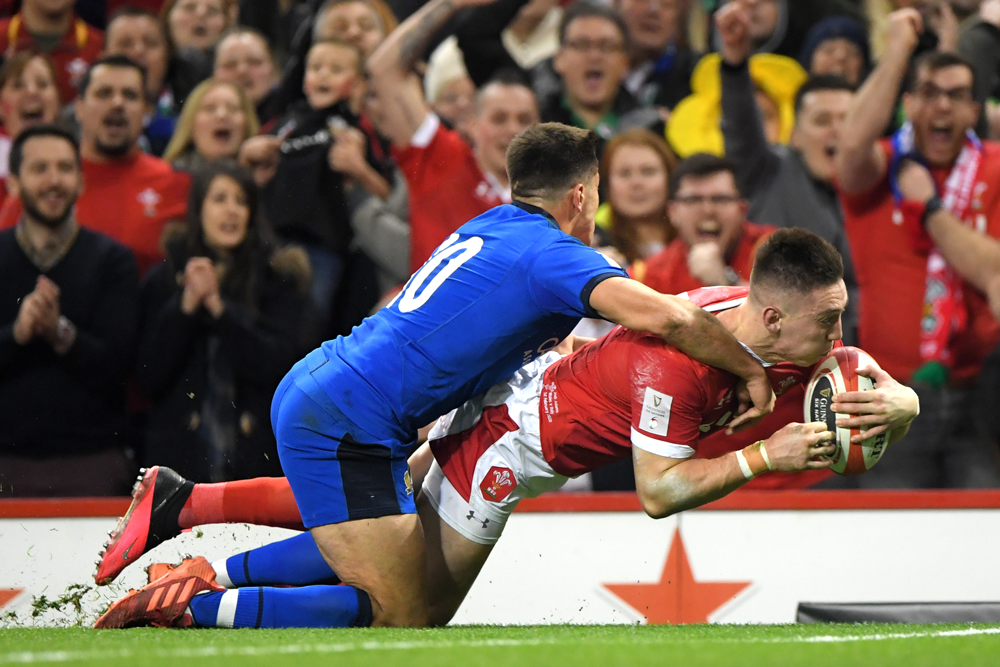 Wales were a commanding 21-0 ahead at half-time under the closed roof of the Principality Stadium following a double from Adams, the leading try-scorer at last year's World Cup in Japan. He grabbed his third in stoppage time at the end of the game.

The Cardiff Blues wing has scored 10 tries in his last eight Tests.

Debutant replacement Nick Tompkins added a third try. George North, playing at centre rather than on the wing following Jonathan Davies' tournament-ending knee injury, powered over from close range for a bonus-point try -- his 40th for Wales -- four minutes from time.

For Italy, themselves under a new coach in caretaker boss Franco Smith, this reverse extended their Six Nations losing streak to 23 matches.

Wales fly-half Dan Biggar kicked the hosts into an early lead with two close-range penalties before a 40-metre effort made it 9-0.

Italy tried to spread the play but Wales, with Aaron Wainwright carrying on from where he left off at the World Cup and fellow flanker Justin Tipuric impressive in defence, kept them at bay.

World Cup semi-finalists Wales' first try arrived in the 18th minute when fullback Leigh Halfpenny sent Adams in at the corner for an unconverted score.

Adams, the leading try-scorer at Japan 2019 with seven, went over again on the half-hour.

Following a maul near Italy's line and quick ball from scrum-half Tomos Williams, Biggar, with his back to Adams, managed to find the flyer with an outrageous pass between his legs.

Biggar landed a tough conversion from the touchline and Wales led 21-0.

Italy pressed for a try in the second half as they declined kickable penalties but rarely looked like penetrating the Welsh defence.

On the hour, replacement forward Cory Hill made a break and Saracens centre Tompkins, coming off a ruck, sprinted clear from some 40 metres.

North thought he had scored a bonus point try but a Tompkins knock-on saw his effort disallowed.

But he was not to be denied before Adams too forced his way over from close range.

Wales are away to Ireland next weekend, when Italy travel to France.