The Aussie Sevens staff took a cautious approach with one of the team's all-time highest scorers, reluctant to put a deadline on her return to play, but almost seven months on from Alice's arrival, Cherry has ticked all the boxes required of her to make her top flight comeback.

Cherry said she was looking forward to finally getting back out on the field.

"I knew going into the Christmas break that was a really crucial period for my training," she said.

"Coming back after that I was in really good stead and slipped straight into full team training at the start of the year and have got a solid two weeks and i"m really excited to now head to Hamilton."

Return of the GOAT. #Hamilton7s

With a new format that has the team playing two pool matches on day one and one on day two, as well as any finals matches, coach John Manenti said Cherry would be given plenty of opportunity for a run in Hamilton.

"We'll get her out there early in the piece and see how she's travelling and the format of the tournament, even if you go through to the final round it's a six-match tournament.

"There's two games on day one so we'll certainly give her big minutes in one and probably one easier minutes and see how she pulls up on day two.

"The first game of any season is tough for anyone so you're sore after that so how she's going to pull up after day one is anyone's guess so that's why we bring her to NZ to give her that opportunity to play a little bit."

Nicknamed the 'Goat", Cherry will have plenty of eyes on her in her comeback tournament but co-captain Sharni Williams said the star would thrive on that pressure.

"We didn't push her to come back but we know what Cherry's like...she's a determined, amazing country girl that just thrives on expectation," she said.

"It's really exciting to have her back." 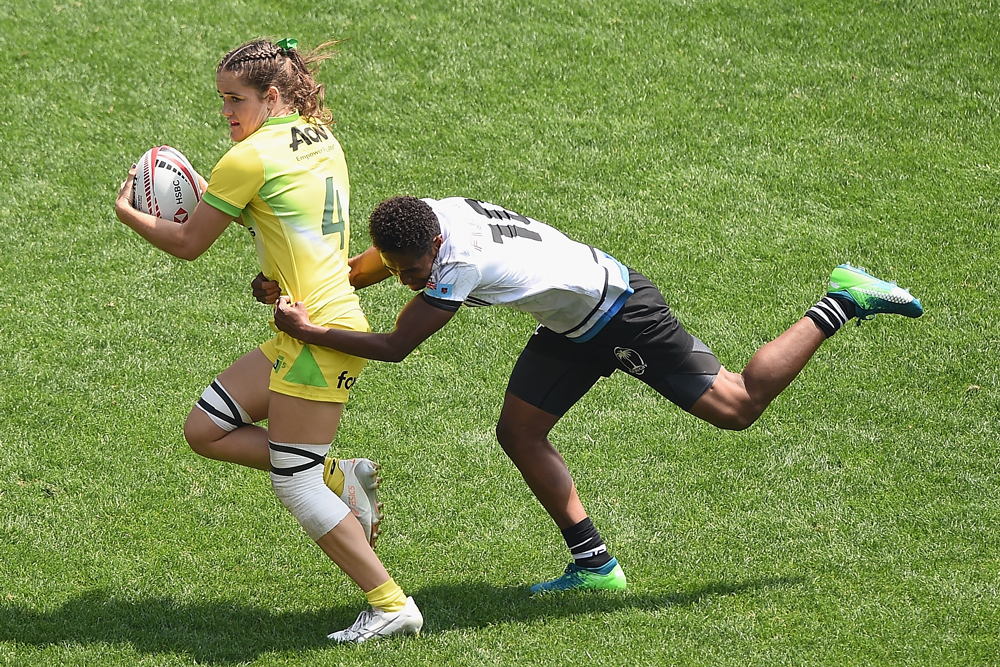 Manenti said it was a handy boost to see those two back in the group, along with Cherry.

"They're both girls that have got experience on the World Series and obviously Emma brings another kicker into the fold which is handy to have and Dominique's a good finisher," he said.

"She can play centre, she can play wing and we've been working on her playing a little bit in the forwards too so it gives us a bit more experience."

Jakiya Whitfeld will miss the tournament after suffering a leg injury in her debut series in Cape Town.

Charlotte Caslick is still missing with a hamstring injury, but is expected to return for Sydney while Evania Pelite is still working her way back from a plantar fasciitis injury.

The Aussies take on Brazil, Russia and the USA in their Hamilton pool, with pool winners and the best second-placed side progressing to the Cup semi-finals.

The Hamilton Sevens kick off on Saturday January 25 and run until Sunday January 26, LIVE on FOX SPORTS.