UPDATED: Returning Sevens star Chloe Dalton is in the gym six days a week as she works to rebuild some size and power for her rugby return.

The Carlton AFLW player Dalton is set to rejoin the Sevens fold in April at the end of the AFLW season but is already ensuring her body is prepared for the switch.

Dalton left the Sevens program at the start of 2018, just months after being named the 2016-17 Australian Women's Sevens Player of the Year, and moved to Melbourne where she ultimately found an opportunity in a different code.

With the different demands of AFLW compared to Sevens, Dalton has shed some size in recent seasons and is working on regaining some muscle in coming months.

"I'm in the process of trying to put on a bit more size," she said.

"I'm working about six days a week in the gym trying to get bigger and stronger with the goal of when I come back to Sevens because of that physical battle, making sure that at the breakdown I've got enough strength and size behind me." 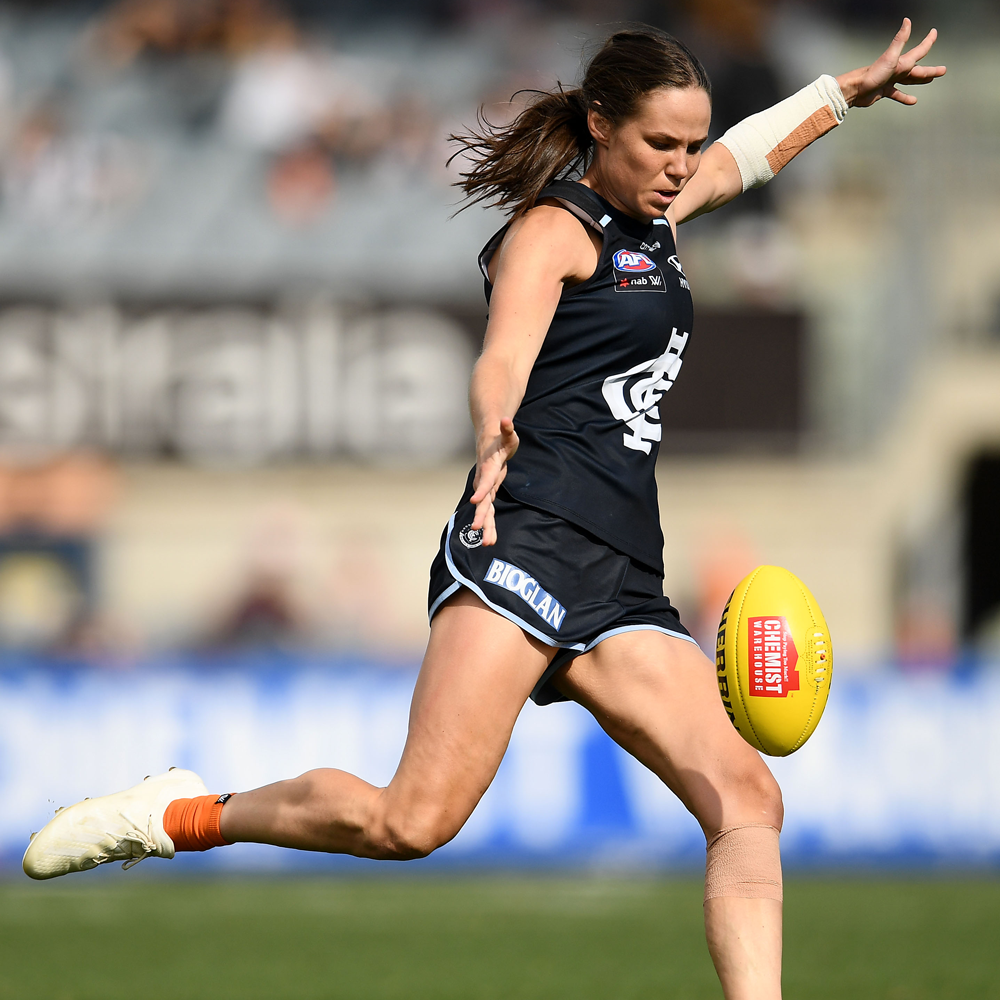 It's not just strength that she's working on - Dalton has been doing sessions with kicking tee expert and Rebels Super W assistant coach Peter Breen to work on honing her rugby-specific skills.

"it'll just be that high speed repeat efforts in Sevens, which is probably just a little bit different to the AFL which the longer running," she said.

"Then just tackle tech, ruck work, getting off the ground, all things that I've started doing with Peter Breen down in Melbourne, been doing that a couple of days a week with him which has been awesome."

The two years Dalton has been away from Sevens were a timely dose of perspective for the 26-year-old, who was working as a physiotherapist and juggling her job with AFLW training and games.

It's something she said made her appreciate the full-time opportunity in Sevens that little bit more," she said.

"Initially walking away and starting to work as a physio and balancing that with the AFLW - looking back on it now, it's given me a really good appreciation for the ability to be a full-time athlete.

"That's something I really missed and being able to devote each and every day to making yourself the best athlete possible.

"I think with that perspective of having to go to work and then go to training at night, it's made me realise how much more time you can invest as a full-time athlete.

"That's awesome and it'll just be really nice to be back with the Sevens girls after a bit of time away."

Dalton was a key part of the Australian side that won gold in Rio in 2016, as a forward and as the team's regular goal kicker.

While drop kicking and punt kicking aren't exactly the same, Dalton said she might look to use the boot in play more often.

Not sure whether the old kicking style has changed much with the codes 🤦‍♀️ Pretty crazy to think that less than 12 months ago I was playing my first ever game of footy, and today we play in Carlton AFLW’s first ever finals series. 2.45pm v Fremantle @ Ikon Park Watch live on 7 #upthebaggers


"I'm still working on my drop kicking for restarts and conversions for when I come back but possibly trying to utilise the kick in game play a little bit more which isn't necessarily as common in Sevens because you want to hang onto the footy," she said.

"I've been working pretty hard on my kicking in the AFLW so maybe that can be a point of difference."

She stepped away from the program at the beginning of 2018 before trying her hand at Aussie Rules, progressing through Carlton's VFLW side and into the AFLW team in the 2019 season.

While the deal is currently just through to the Tokyo Olympics, Aussie Sevens coach John Manenti kept the door open to keep Dalton in the mix for longer.

"That's a conversation for down the track and if she gets to the Olympics and what happens beyond that.

"At the moment we're focusing in getting her through to Tokyo and then we'll cross next bridges after that."

Manenti took over as coach months after Dalton left the program and said one of his priorities was to bring the star back into the fold.

"I was reasonably close to Chloe as a player when she was here and understood the reasons for her going and always had it in the back of my mind that I'd love her to come back and I think even said to her, the door's always open," he said.

"So, it wasn't day one that I called her but it was fairly early in the piece that I got in touch and suggested at one stage she might like to come back and it took a fair bit of persistence from me but I got her."

Yesterday at 8:33 AM Super Rugby
Feature