New Brumbies recruit Solomone Kata has made an instant impression in Canberra and backs coach Pete Hewat believes the ex-NRL player can bring a vital "point of difference" to the ACT backline in 2020.

The 25-year-old centre joined the ACT club in the off-season after six years in the NRL and he is already surprising teammates and coaches with his smooth transition back to rugby.

Kata played rugby all through his childhood but switched to league when he was offered a contract with the New Zealand Warriors in the NRL.

He played 93 games for the Kiwi outfit before signing with the Melbourne Storm through to 2020.

Late last year, though, Kata opted to return to his childhood code and instead of taking up a second-year option with the Storm, he joined the Brumbies.

The 177cm, 104kg centre has a hulking presence on the field and Hewat said he was excited to see how the ball-crashing back can influence a competitive clash.

“We've been surprised but also amazed at how quickly he's actually got back into rugby and understanding the rules and look forward to seeing how he goes,” he said.

“He brings that point of difference to our backline that we haven’t had for a few years, power and aggression and we're really looking forward to seeing how he transfers into his opening games.”

Kata shapes as an inside centre prospect, jostling with incumbent Irae Simone for that position, and if he gets an opportunity he could make up one half of a super-sized midfield alongside Wallaby Tevita Kuridrani.

Hewat said the competition for backline spots was intense but also pivotal for the side, who have lofty ambitions for 2020.


“It's exciting, there's some talent in that backline,” he said.

“Simone had a really good year last year, he offers that aspect skill-wise as well.

“There's some hard decisions for us as coaches to make but you want that leading into the season and we need to be better than we were last year, we're not here to make finals, we actually want to win the competition.”

Kata’s backline teammate Tom Wright made the switch back from league just over a year ago after moving from the NRL’s Manly Sea Eagles. 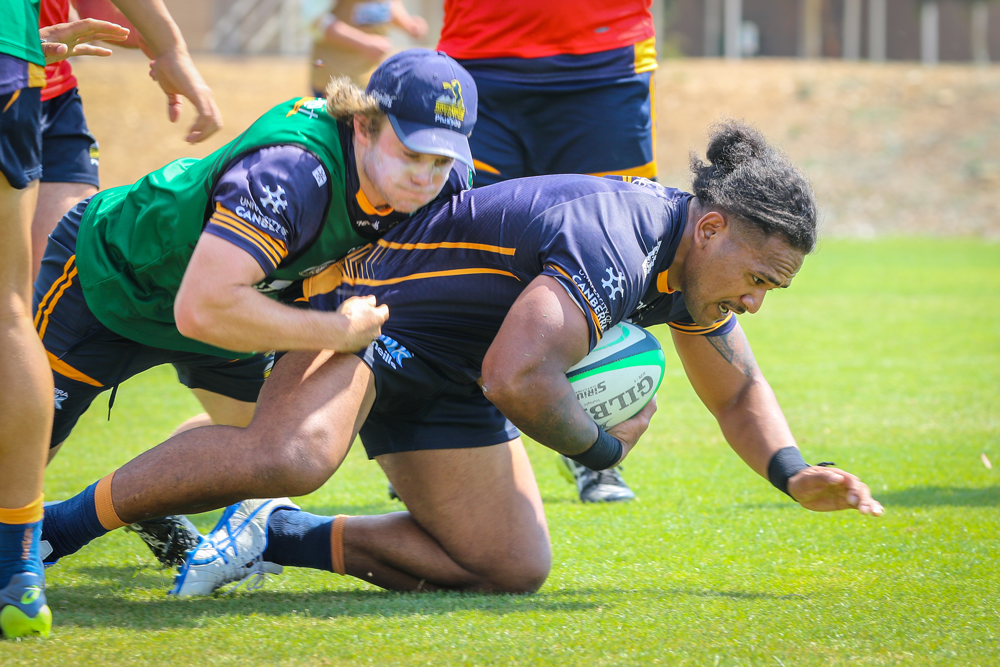 Wright said Kata had settled into the team quickly and didn’t need much of a hand returning to the 15-man code.

“The club got him here to play football and I don't think anyone needs to teach him how to play football - we're all pretty aware that he can bust tackles and put big hits on and that sort of stuff,” he said.

“It was more just an adjustment period for him, very much similar to what I was probably 12 months ago and he's adapted really well, he's a really likeable guy, a lot of the squad got to know him really quickly.

“He's one of the more liked guys out of the new group just because of how open he was when he first got here and he got to know guys really quickly.”

The Brumbies have been in Newcastle this week after relocating from Canberra due to hazardous air quality and are expecting to remain in the regional city until next Wednesday.

While it was a last-minute change of plans for the Brumbeis, the move has a silver lining in that it has created a mini preseason camp for the team, Hewat sai.

“That's the positive in it - we're really looking forward to getting back to Canberra and helping our community out, this is really, really tiny in terms of when you put things in perspective, what's happening back home,” he said.

“If you look at the positive, we're away here in camp, getting the boys bonded together, obviously the Wallabies coming back and getting them tight with the newer and younger guys.”

The Brumbies take on the Rebels in Albury in their only preseason trial on Thursday January 23. Buy tickets here.