Rugby Australia chairman Cameron Clyne says CEO Raelene Castle's position is "not in question", in a statement after the final 2019 board meeting.

There had been speculation that Castle's future would be placed on the board agenda on Monday with Sydney radio outlet 2GB claiming there was a lack of unity between the board and Castle over their approach to the Israel Folau case.

Clyne rang the radio station and engaged in a heated exchange with host Ben Fordham about the comments.

In the final part of a statement released on Monday evening, Clyne said the board was "united behind" the Folau settlement decision and Castle's position was "not in question".

“Raelene’s position is not in question and the Board is united behind the process undertaken with Israel Folau," he said in the statement.

Clyne also moved to clarify the status of Rugby Australia's broadcast negotiations after reports that Rugby AU had rejected an offer made by Fox Sports earlier this year for the rights from 2021 onwards.

“2020 is an important year with the broadcast rights negotiations underway and we remain in dialogue with our long-term partner Fox Sports as we aim to deliver the strongest levels of coverage for all of our competitions over the next five-year cycle," he said. 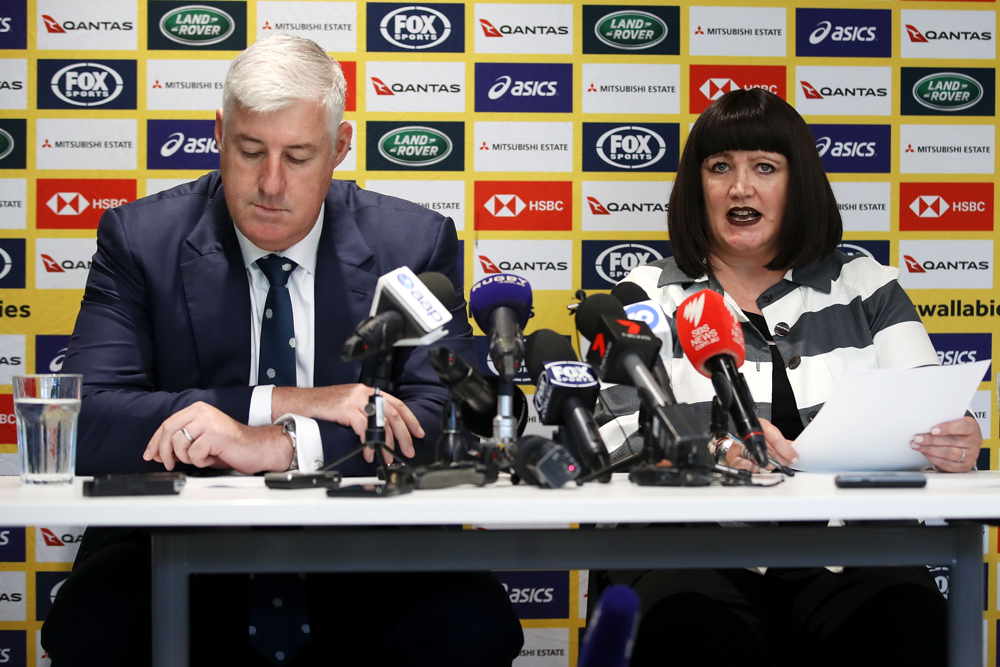 As part of the board gathering, the directors were given updates on various parts of Rugby Australia's business and Clyne was quick to draw attention to positive developments in the game in 2019.

“The board extends special thanks to the 900-plus Rugby clubs Australia-wide and all volunteers for their hard work over the 2019 season to grow and nurture our game," he said.

"Without them, none of the game’s achievements would be possible and there are many positives to take from the past 12 months.”

“The Rugby World Cup in Japan was enjoyed over 40,000 Australian travellers – second only behind English fans as the most to attend the tournament. The World Cup also gave Australian rugby its highest representation of match officials since 2003 with both Angus Gardner and Nic Berry taking the whistle.

“The hard work has already begun for the Wallabies as we build towards France 2023, and we are excited for the future after securing Dave Rennie as the new Wallabies head coach. It was encouraging to see the rugby community embrace Dave’s appointment with 86 per cent of Facebook followers and 70 per cent of Instagram followers reacting positively to the news last month.

“We look forward to sharing the next steps from the review and our plans to return the team to its rightful place at the top of the world rankings."

Clyne made specific mention of participation and pathway milestones reached in 2019.

“The Junior Wallabies came within a point of bringing home the Under 20s World Cup, and then our Schools & U18s team completed an undefeated tour of New Zealand. Importantly, the vast majority of these young stars of the future have been secured in our game long term,” he said.

“As we look towards the 2020 Olympic Games the sevens format is continuing to grow in popularity, with 41 spring and summer competitions kicking off across the country over the past two months.

“Over 30 clubs ran our new Get into Rugby program in clubs in 2019, introducing hundreds of new players of all ages to the game by giving them a sample of each of our three formats – XVs, sevens and Touch 7s.”

Today at 10:33 AM International
Feature

'They’re not the All Blacks of old': Wilson says 'it's time for Wallabies to step up' in Bledisloe Cup