Michael Cheika backed an Australian to take over as Wallabies head coach as skipper Michael Hooper revealed players were unaware there was a rift between Cheika and Rugby Australia chief executive Raelene Castle.

Wallabies players and staff began to arrive home in Sydney and Brisbane on Tuesday morning after crashing out of the 2019 Rugby World Cup in the quarter-finals with a humbling loss to England.

It was only the third World Cup quarter-final exit for the Wallabies and the fall-out is already in full swing, with Cheika announcing he will stick to his pre-tournament pledge and not seek re-appointment if they didn’t win. 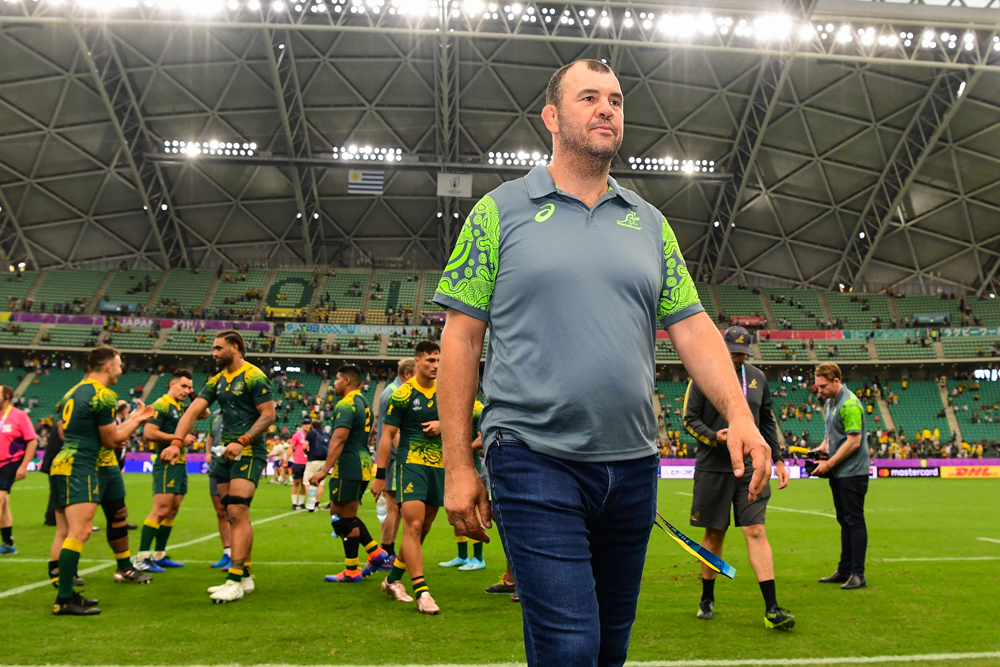 Cheika also lifted the lid on a frosty relationship with Castle and chairman Cameron Clyne, in the wake of Rugby Australia’s decision to appoint Director of Rugby Scott Johnson above Cheika at the end of last year.

But Hooper said players were unaware there was aa breakdown in relations between the coach and front office.

"I know that relationships aren't always straightforward, but whatever they did, they kept it pretty well hidden,” he said.

“I think that’s pretty good credit to keep that away from us, we had a job to do and they didn’t put that in front of our face.

David Pocock added: "As players, in the wash up there is so much talk about CEO-coach relationship all that stuff, they were certainly very good at hiding that from the players."

Cheika admitted he preferred to have total responsibility when coaching, and while former CEO John O’Neill told the Sydney Morning Herald the Cheika-Castle rift was “disturbing”, it’s not the first time Cheika has had a breakdown in relationship with a CEO.

Prior to his sudden elevation to the Wallabies in late 2014, The Daily Telegraph reported Cheika threatened to quit NSW Rugby if Allen did not move on. Allen resigned a few weeks later.

Johnson is set to conduct a review of the Wallabies’ 2019 season, and the World Cup campaign, and Rugby Australia hope to have a new coach in place by Christmas.

O’Neill and former Wallabies captain Andrew Slack were among high-profile voices who questioned the decision to hold an internal review, however, and some believe the audit should also look at the Rugby Australia administration and board, who effectively re-appointed Cheika at the end of last year.

"It should be an independent review - I don't know how you could contemplate it being legitimate if it's not independent," Slack told AAP.

"With Scott's role he will need to be investigating certain aspects but in terms of that overall bigger picture he shouldn't be running that."

Leading candidates for the Wallabies coaching job are already known, with Kiwi Dave Rennie and current England coach Eddie Jones among the front-runners.

Rennie coached the Chiefs to back-to-back Super Rugby titles before joining Glasgow, but some commentators say the new Wallabies coach should not be a foreigner.

Cheika agreed when he was asked about the issue after arriving home at Sydney Airport.

"It’s not up to me so I have no say in it but I think we should be backing and supporting Australian coaches wherever possible,” Cheika told journalists on his way out.

Hooper, who said his relationship with Castle was “fine”, said he would be contribute to the review and said the failure of the Wallabies at the World Cup was more fire in the belly for the many young players frustrated with a lack of success in recent times.

"In failure it builds a lot of hunger and desire,” Hooper said.

"You want to get back on the field. Yeah you want to have a mental break but I am keen to play some rugby and turn this stuff around, because we want Australian rugby to be strong and be great and we haven’t been able to do that.

"There is a lot of young talented guys, and because there hasn’t been a huge amount of success in that last couple of years, very hungry guys to be part of that change that has to be made. That’s exciting. Guys are sick of where it is at, and want it to be better, and that’s positive.”

Pocock said Cheika had held the backing of the Wallabies’ dressing room throughout.

"He did. One of the harder things about the loss is that the team has been so tight,” Pocock said.

"We have worked incredibly hard, we built bonds, we have tried to do a lot of things outside connecting. It felt like we were representing the best of Australia, a very diverse group of people coming together and being able to express their unique heritage and .. those little quirks and differences, but at the end of the day, being Australian and wanting to represent Australia as well.

Still really feeling the disappointment but wanted to thank everyone for the amazing support we received at #RWC2019. And thanks for all your support over the last decade or so. Been an honour to represent Australia. Thank you ❤️https://t.co/BueWzuoUNT pic.twitter.com/2YcA1KnS9Q


"And wanting to inspire the next generation of boys and girls to want to play for Australia.

"So to get knocked out in the quarter-finals is disappointing, because there are a lot of boys and girls watching who really wanted us to go on and do well."

"We never had an argument": Thorn refutes suggestions of rocky relationship with Rodda