One Percenters: Cockbain to join Waratahs

Former Wallaby Matt Cockbain is set to be officially unveiled as the Waratahs' new forwards coach, completing the NSW coaching team for 2020.

The Waratahs announced Kiwi Rob Penney as their new coach less than a fortnight ago and Penney hinted an announcement on his assistant was looming and that it would be an Australian.

Cockbain, who played for the Reds in his Super Rugby career has been coach of Japanese side the Ricoh Black Rams in the past three years, a stint that came after a year as an assistant coach with the same side.

The former Test second rower has also spent time in Super Rugby, as an assistant of the Rebels for three years before a stint in Fiji

While the Waratahs are yet to officially confirm his appointment, Cockbain tweeted about his excitement at joining the side on Saturday.

Wallabies give tourists an afternoon to remember

Typhoon Hagibis left plenty of Aussie tourists  in Japan scrambling around for a safe hotel to see out the storm, but one tour group’s long wait turned into a memorable experience in Odawara.

A large group run by We Love Rugby – who are Rugby Australia’s official tour operator – were at the town ahead of the Wallabies’ clash with Georgia, and they scrambled back there (instead of the planned Tokyo) on Friday night.

Who should follow them into their hotel? The Wallabies.

Unable to leave the now crammed hotel, on Saturday evening, coach Michael Cheika, assistant coach Nathan Grey and a collection of players made the tour group’s trip by doing a two-hour, off-the-record Q & A session for them, and posed for photos afterwards.

“Tonight we were incredibly privileged to share an unforgettable night with Wallabies coaches Michael Cheika and Nathan Grey,” said a post on the We Love Rugby Facebook page.

“Phones were turned off & confidentiality guaranteed as Cheik & Nathan provided unique insight for our tourists in Odawara.

“While we were disappointed to be holed up by the Typhoon we were joined by the Wallabies at our hotel who provided a day we will cherish. The perfect gentlemen & a credit to Rugby Australia.

“An enormous thank you to Michael Cheika & Nathan Grey for an incredible few hours! Our tourists will remember this forever.”


Millie Boyle is making a case to be regarded as one of the best women's footballers in Australia across any code.

Following on from our item last week about Boyle winning an NRLW title with the Broncos she was named in the Jillaroos side to face New Zealand later this month, as well as Australia's team for the World Cup 9s in Sydney this weekend.

She was back in rugby colours last week though, heading to the Reds long lunch on Friday, where she was named the women's Super W players' player just hours before being named Brisbane's best forward at the Broncos' presentation night.

Boyle escaped a post grand final scare last week too, having to have her NRLW premiership ring cut off after it got stuck when her finger swelled overnight.

Following the cancellation of their match in Kamaishi, @RugbyCanada players headed out to help with recovery efforts, showing the true values of the game.

Amazing scenes and brilliant to see from the team. #RWC2019 pic.twitter.com/jdXQlyD2ZM

Canada's final Rugby World Cup match against Namibia might have been cancelled on Sunday but they weren't taking a day off.

The seaside town of Kamaishi, which was devastated in a 2011 tsunami, was hit by Typhoon Hagibis on Saturday night and left wiht plenty of mess to clean up.

The Canadians spent their day helping out the small town and cleaning up damage left by the typhoon.

In more typhoon news, Hagibis left a trail of destruction in many parts of Japan and there were plenty of scary moments for people during the storm.

Scotland's players shared vision of their hotel creaking and swaying in the 160km/h winds on Saturday night.

Torrential rain proved no barrier for Japan, though, with players all but swimming to their captain's run ahead of Sunday's clash with Scotland. 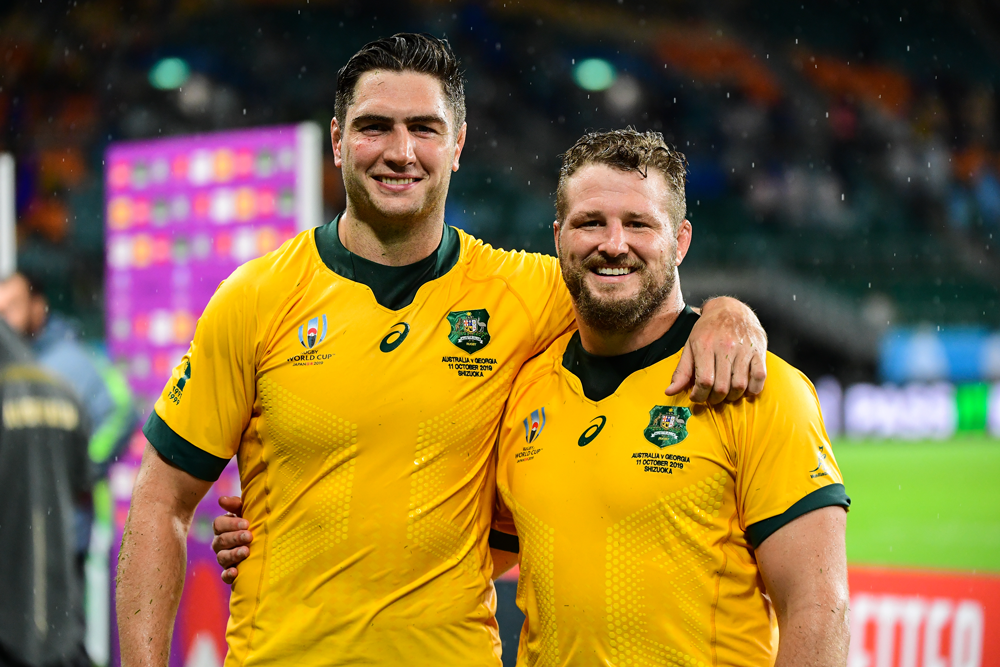 Rob Simmons shared his 100th Test with one of his oldest friends, James Slipper, on Friday night, adding a significant milestone to a friendship that has lasted more than a decade.

The Southport School alumni played together in high school before embarking on careers with the Queensland Reds, and now the Waratahs for Simmons and Brumbies for Slipper.

While they've both added plenty of years of experience to their belts since school, Slipper said his good friend hadn't changed much in his journey to a Test century.

"I think Simmo's always been the same sort of bloke but me probably a bit of a hot head at times," he laughed.

"I guess you go through growing up as a person...you always make mistakes along the way.

"I guess you evolve with the times, I think at this stage in our career both of us, we're closer to the end than the start and we're just enjoying doing our job for the team and really enjoying the moment."

Slipper said he and Simmons were both still in disbelief at the fact they've managed to carve out rugby careers for Australia for so long.

"We actually spoke about this the other day - we shake our head at it every time, the opportunity that's been given to us and to be sitting here with Simmo playing 100games and myself in the 90s, we're just very humbled by it," he said.

'We didn't really expect this as young blokes hanging around enjoying ourselves so to represent our country for so many years it's been a blessing and one we'll never forget and one we'll cherish."

It's hard to imagine the All Blacks' biggest names being starstruck but the Kiwis were in their element when they met some of the world's biggest sporting names this week.

New addition Russell Westbrook posed for pics with a number of the All Blacks players in Tokyo this week.

There were a few awkward moments for Reds coach Brad Thorn at the club's long lunch and official season launch in Brisbane on Friday.

The former All Black was among a panel asked who they thought would win the World Cup.

While Bryce Hegarty, Isaac Lucas and Jim McKay plumped for the Aussies, Thorn passed on the question, bringing a giggle from the crowd at Brisbane's City Hall.

"It's a tough one. I grew up in New Zealand until I was seven years old and I've grown up in Brisbane and Queensland and played some league and played some rugby and it's an awkward thing when you have a love for two countries.

"I want the Wallabies, our lads that are in there - number one I don't want them to get injured - and I want them to do well for Australia.

"But obviously there's a soft spot for New Zealand as well.

"So that's not really an answer."

A second row. Passing behind the back. It's beautiful. #RWC2019 #AUSvGEO pic.twitter.com/KXjtLGrZfV

The Wallabies had a tough time with their ball handling in a wet and windy Shizuoka on Friday night.

Australia's media manager, Chris Ford, had no such problem, as shown by this quickly-circulated vision of him shooting a behind-the-back pass to lock Adam Coleman.

Clearly time in camp is being well spent.

The Michael Leitch beard is officially a thing #JPNvSCO pic.twitter.com/sCXI015dAG

The 2015 Rugby World Cup brought us Goromania, could 2019 be the Year of the Leitch?

Even the prospect of that is pushing his popularity upwards, sparking some mini-mes in the crowd.

We reckon the number of mini-Leitches might sky rocket if the Brave Blossoms progress.