David Pocock got through unscathed, the Wallabies managed a banana skin game, Marika is a freak-a and did we mention David Pocock is okay?

What else are we talking about after Australia's win over Samoa?

The best thing sighted in the Wallabies’ victory over Samoa was the surprise on David Pocock’s face.

It came in the 59th minute when someone pointed out to Pocock that Liam Wright was on the field as his replacement, and he had to get off. 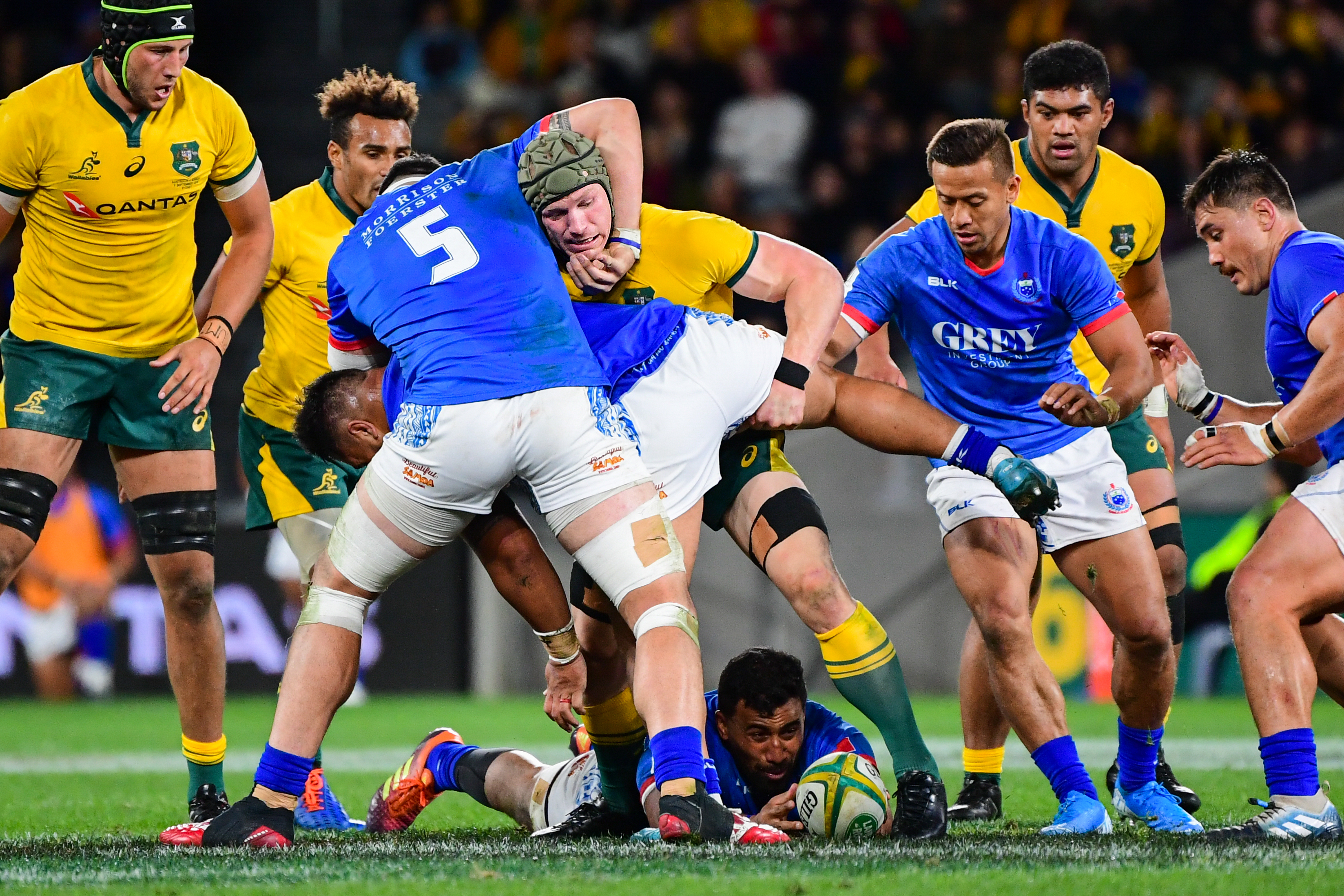 This was - without a shadow of a doubt - the best possible way for Pocock to leave a game after spending the previous 183 days watching them from the sideline.

Pocock’s successful return, injury-free exit and post-game smile was ranked one, two and three as far as positives for the Wallabies from a game that otherwise meant little as a World Cup form guide.

Yes, it got closer for comfort than you’d like but this was not the team who’ll play at the World Cup, and aside from avoiding defeat, just how emphatic the victory was a moot point.

Given the new combinations, the fight in Samoa and leg-heaviness from two weeks of conditioning, getting a win was the pass mark.

The biggest question mark of all was Pocock. There were many times this year where many senior figures held doubts that the champion flanker would make the World Cup.

His calf injury was a mysterious ailment. The muscle in Pocock’s significant calf wouldn’t knit properly, and the slow-but-steady rehab process was a down-to-the-last minute prospect.

Cheika said post-game he never had doubts Pocock would make it back, after the medical staff and the Brumbies set a good plan in action and followed it down to a T.


But still, anyone who says they weren’t half-watching through the fingers as Pocock bent, stretched and sprinted against Samoa is telling porkies.

The relief he came through unscathed was palpable.

The Wallabies game, when they’re absolutely on, is to be so superior in the fitness department they can play at a fast-paced tempo for far longer than their rivals. And then reap the reward of a fatiguing opponent

The prosecution tenders Perth and Dunedin as exhibits A and B, your honour.

There is a reason why they head to far-flung islands and train like they’re in the Rocky IV montage. 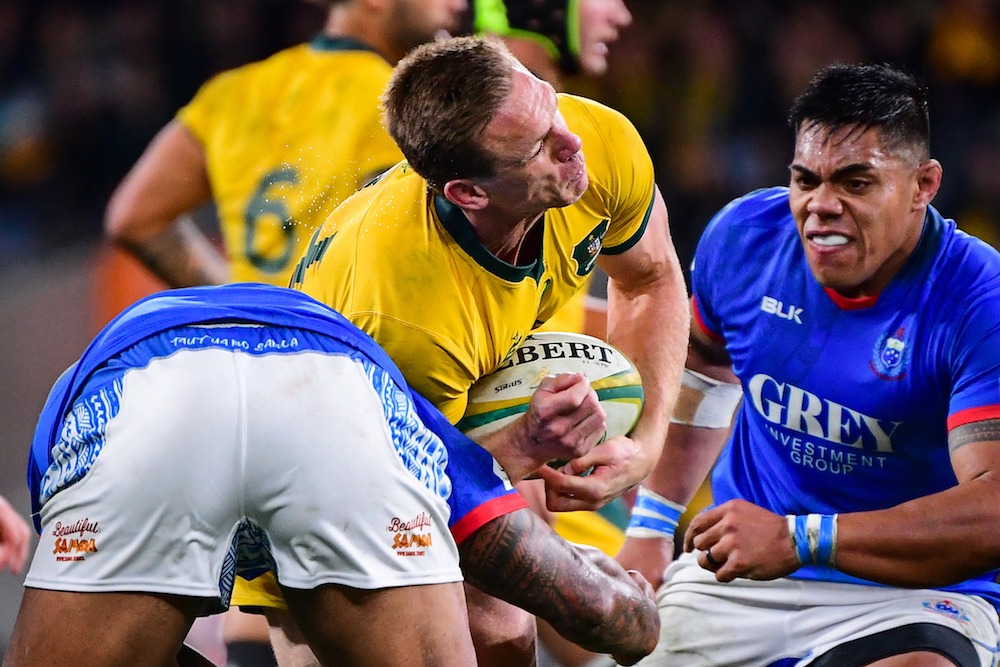 But the there is as much risk as there is reward in that strategy. And to makes matters worse, it’s compounding risk.

Suddenly you’re in a dogfight with a team set up to be physical, and they’ve got you where they want you as you attempt to re-ignite your high-tempo game with high-pace and high-risk.

So the Samoa game unfolded, in the second-half at least.

The Wallabies’ looked sharp and a class above in the first half, and holding onto the ball for long stretches, stretched the Samoan defence far enough to nullify the big hits. Or some of them anyway.

Second-half, the Wallabies started coughing up mistakes and made them worse by doubling, and sometimes tripling, up.

Suddenly the pace went out of the game and the whole run-em-off-their-legs plan collapsed.

In fact, the team whose legs were running out were the Aussies. They’d been getting battered in the fitness department in their Rocky montage in Noumea up until Wednesday.

It shouldn’t have got so close but in the past - read 2017 June series - the Wallabies would have lost a Test like that.

The resilience and composure to avoid the disaster tornado and get back on the rails in the last ten minutes was as good a takeaway as any from a banana skin Test match.

You could bang out a fair argument in favour of that exam question.

Koroibete has been consistently excellent in the Wallabies’ winter thus far.


He missed the first loss in Johannesburg but has been a massive contributor to the subsequent three Wallabies’ wins from four games.

He has been far-and-away the Wallabies’ most prolific metre-eater, with an average of 90.5 metres per game. He’s averaged almost six defenders beaten per game, too.

At Bankwest he logged his best stats ever in a Test match, and evidently his nose for a try is as good as ever.

But it’s Koroibete’s rugby smarts that now stand out as much as his pace and finishing.

Once a catch-and-tuck-it runner, Koroibete can now be found providing long passes, and as he did for Lukhan Salakaia-Loto try.

And his awareness at the breakdown is top-notch, too. Many of his metres are surprise pick-and-go attacks, and he is also sighted often getting back to his feet after being tackled and going again.

These are the impacts that can turn a great athlete into a world-class Test footballer.

Rugby can be a cruel game, and it will probably burn Sekope Kepu that his last touch on Aussie soil was a dropped ball. The substitution was planned but the competitor in Kepu probably stopped him seeing a deserved standing ovation. 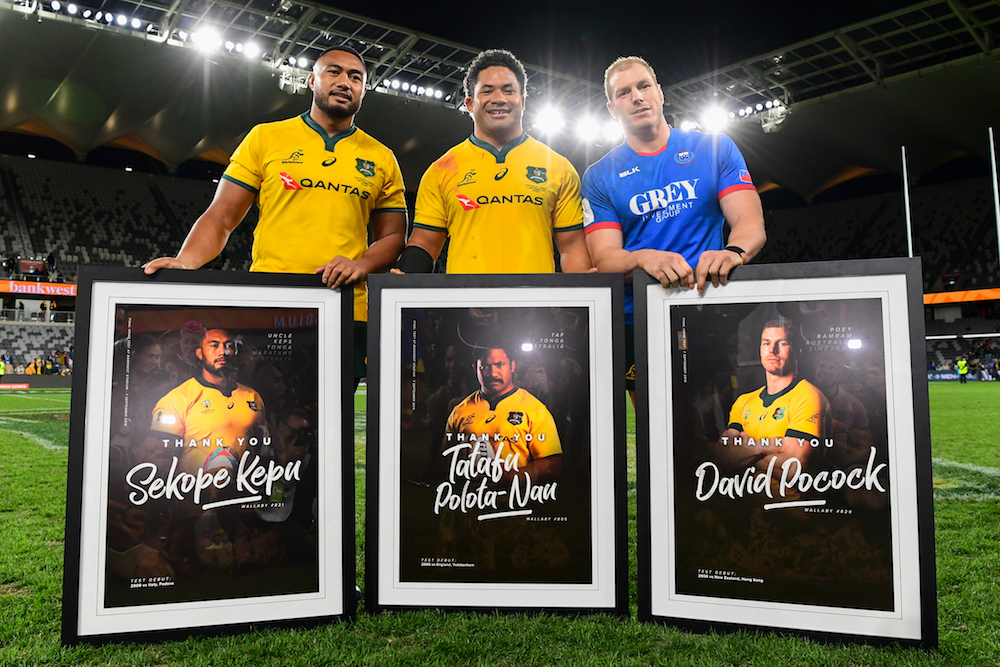 Luckily, then, the veteran prop was farewelled again after the game in a post-game presentation, where Tatafu Polota-Nau handed over a special print.

Polota-Nau got one too, and so did David Pocock. All were duly feted.

All three have been loyal servants of Australian rugby and they will go with a nation’s thanks when it all ends on November 2. Right?

Michael Cheika is a massive believer in depth being one of the key indicators of a successful team. And that’s a fairly obvious truism in sport.

But when you break out the decisions Cheika has to make around the backrow at the World Cup, for example, the point is hammered home. 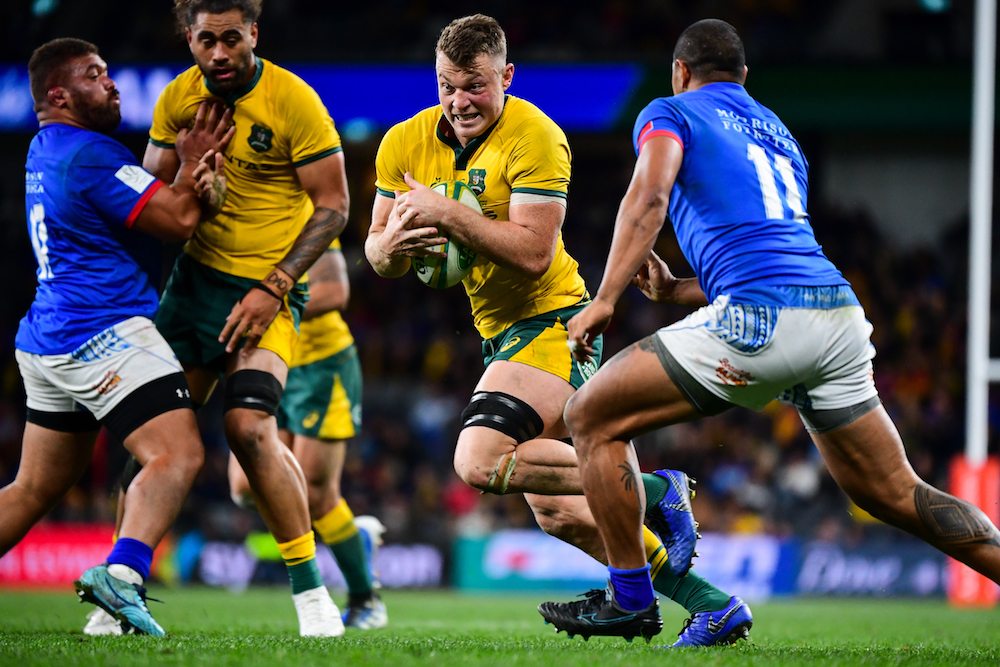 Forget Pocock for a second. The strong return of Jack Dempsey from injury against Samoa has thrown in yet another legitimate option onto the selection table for one of the four back row spots in the 23 against Japan.

Lukhan Salakaia-Loto had probably his best game of the winter in a display that highlighted his raw aggression - and don’t doubt you need a hitman at the World Cup.

But then there’s Isi Naisarani and a guy called Michael Hooper as well.

How do you pick a starting back row from that group? Two sevens? Traditional back row?

Cheika was asked if he now has more selection headaches post-game.

“They’re not headaches mate,” he said.