Black Ferns too strong for wobbly Wallaroos in Perth

Wallaroos coach Dwayne Nestor bemoaned his side getting "bullied" after the Black Ferns handed Australia a 47-10 thumping at at Optus Stadium in Perth.

The Wallaroos went into the game with high hopes after two wins over Japan last month but New Zealand proved why they’re the world champions by dominating Australia with an eight tries to two win.

In what was the Black Ferns’ 18th consecutive win over their trans-Tasman rivals, the visitors led 22-0 at halftime and though winger Lori Cramer scored two tries for the Aussies after the break, the Kiwis kicked away with another four tries. 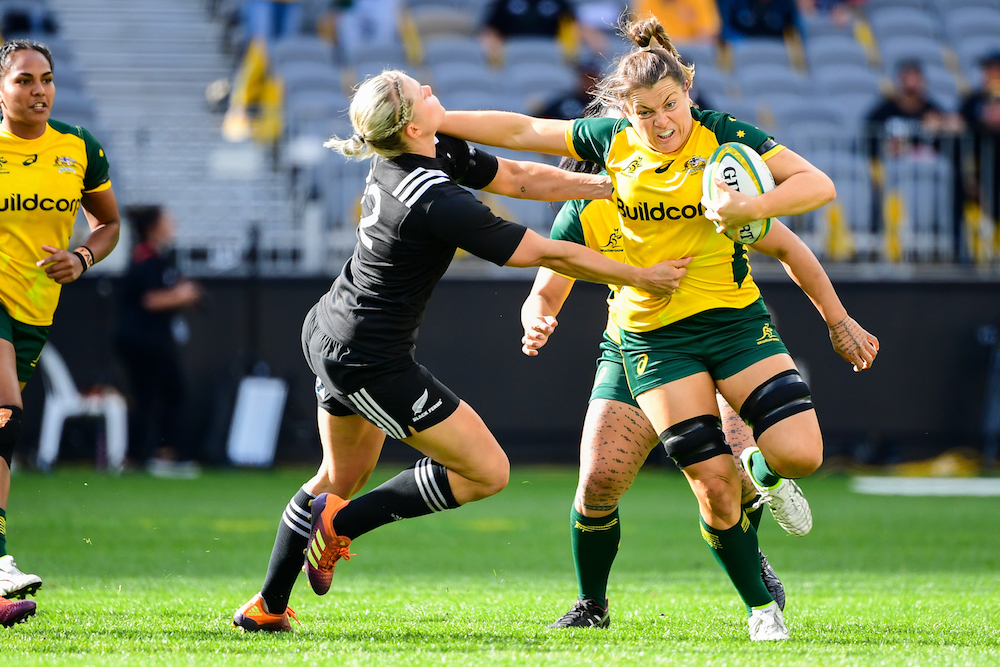 The Wallaroos had no answers for the aggressive Black Ferns defence but they also let themselves down with a disastrous lineout - they lost 6 of their 17 throws - and 26 missed tackles.

Throw in numerous loose carries that saw the ball stripped by the Black Ferns and the Wallaroos were well and truly knocked off the polished form they showed against the Japanese.

"I think we allowed ourselves to get bullied [in the] the tackle contest. We had way too many balls stripped from us. We didn't nail our tackles, we spoke about sticking our tackles and it just didn't happen," Nestor said.

"One-on-one, it's a contact sport. You've got to go and whack someone and we didn't do that."

Nestor said his team had allowed themselves to be dominated by the Kiwis due a mindset problem.

"We've got to get over the fact we haven't beaten them," Nestor said.

"I think the girls are allowed to do certain things in club rugby which they get away with but then when you go and play a team like the Black Ferns, you don't get away with those things. It's almost like they sit back and let it happen. I think it's a mindset we need to help create."

Wallaroos skipper Grace Hamilton said the loss was gut-wrenching and would need to be a motivator for the return leg in Auckland next week.

"It's disappointing but for us I think the biggest thing is we learn from this and we fire into next week," Hamilton said.

"Defensively we didn't value the ball enough when we had it and we turned it over easily. That is something we need to work on. We need to value that ball because that is the way we get momentum. We played into their hands."

On a positive note, a crowd of 30,142 was on hand at the end of the game to break the world record for highest attendance at a women's Test match.

The Black Ferns led 22-0 at halftime after a dominant opening 40 minutes by the Kiwis.

The two sides jostled early but New Zealand turned immediately to their strengths up front when they got near the Australian line.

After a five-metre lineout, the Black Ferns rolled in a try via route one and big no.8 Charmaine McMenamin was the tailgunner who came up with the opening try.

The Aussie side’s struggles to hold onto possession began thereafter, via the malfunctioning lineout and loose carries into traffic, and and the Kiwis were able to return to the Wallaroos’ red zone.

A second try came when the Kiwis found numbers on the right wing and Renee Wickliffe touched down in the corner.

The Black Ferns collected a third try in the 33rd minute when basic defensive misses were added to the list of Wallaroos’ problems.

McMenamin scored her second after a linebreak resulted in simple numbers to the left of the posts.

The visitors continued to make the Wallaroos pay for their untidy play when they scored a fourth just shy of halftime, this time via a powerful break and solo run by flyhallf Ruahei Demant.

The Wallaroos started the second half a little more brightly, and they were rewarded when Alysia Lefau-Fakaosilea stole a ball at a ruck and Lori Cramer collected the loose ball.

The left winger raced 70 metres up field to score the Wallaroos’ first try.

The New Zealanders didn’t take long to reply, however. Having established field position again, the Kiwis kicked wide to exploit some numbers and Selica Winiata dived over.

Sandra Cocksedge added a penalty but the Wallaroos began to get some impact from their bench, and the size of Christina Sekona troubled the Kiwis near their line.

An offload from Sekona saw Lefau-Fakaosilea free the arms down the left edge and give a second try to Cramer in the left corner.

The Aussies began to get into a much better rhythm but after adding good tempo to the attack, reserve halfback Ili Batibasaga then threw a gift intercept to the Black Ferns’ captain Lesley Elder, who raced 50 metres to score.

The New Zealanders scored another two tries in the final stages to claim an emphatic win.