Wallabies coach Michael Cheika says he "wouldn't be able to" select Israel Folau in the immediate future after his latest controversial social posts.

Cheika, Waratahs coach Daryl Gibson and Wallabies and Waratahs captain Michael Hooper spoke to media on Monday in a "united front" on NSW's first day of training since Folau's post.

The Wallabies coach said he hadn't expected  Folau to be in this situation again after making similarly divisive comments almost a year to the day before this most recent post.

"No I didn't to be honest. We had a discussion after the last time  and made it pretty clear about his right to believe and our support in that, if that’s what he wants, to be part of the team," he said on Monday.

"But getting out in that disrespectful manner publicly is not what our team is about.

"When you play in the gold jersey we represent everyone in Australia, everyone.

"Everyone that is out there supporting us, we don't pick and choose.

“I felt that I needed to talk to him (Folau) about why but I haven’t had that chance as yet.” 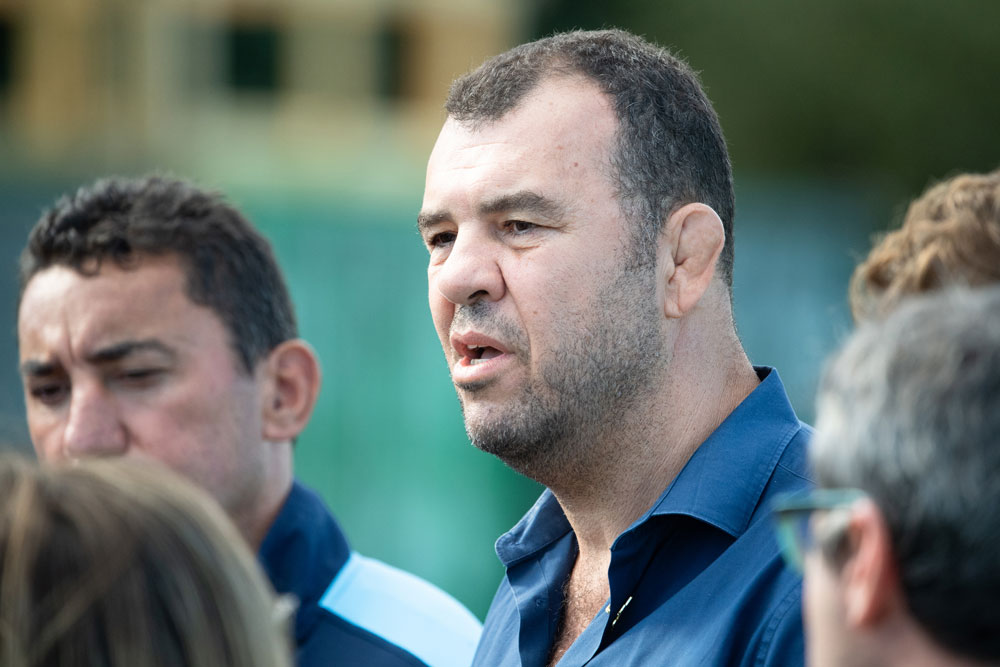 Rugby Australia is expected to issue Folau with a code of conduct breach notice later on Monday after meeting with the fullback last Friday over his post.

The national body signalled after that meeting that it was still intending to seek a termination of Folau's four-year multi-million dollar contract and he was stood down by the Waratahs until further notice.

What follows from the breach notice will depend on whether Folau chooses to accept it, with the most likely outcome being a code of conduct hearing.

A three-person independent tribunal would be selected to hear the case.

Neither Cheika or Gibson have spoken to Folau in the wake of his post but Hooper said he had exchanged text messages with his long-time teammate.

Asked whether he would be comfortable taking the field with Folau in the future, Hooper admitted it would be difficult.

"Like was said before, in this current state and being here and talking about this as a rugby player, it makes it hard, it makes it difficult (to take field alongside him)," he said.

Asked whether he would select Folau again, Cheika said he "wouldn't be able to" as the situation sits currently. 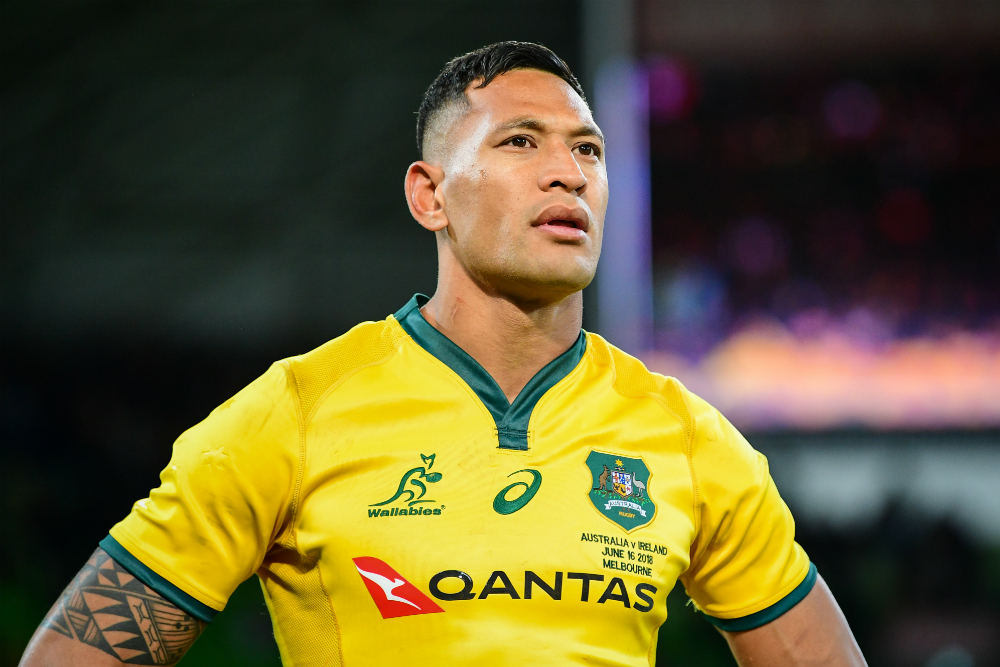 "I think as it stands right now, considering what I just said you wouldn’t be able to because going to the World Cup, which is a tournament where I’ve been lucky enough to go to one where we go together in that tournament, the team, which he was a big part of," he said.

"So together it gave us extra power, I think we went into that tournament ranked sixth or seventh you know. We came out, we made the final and I think a lot of it came through momentum of the team’s togetherness, you know what I mean.

“Everyone knew they gave a little bit of themselves and that could be through a lot of ways, selection, I didn’t get picked, players who hardly played any games in that tournament contributed to the cause on all fronts and in any sport where I think the team’s involved, that’s really important."

This is not the first time that the Cheika, Hooper and Gibson have had to speak after Folau has published a divisive post.

Folau was in Wallabies camp in 2017 when he posted about his opposition to same-sex marriage and it was mid-Super Rugby season with the Waratahs last year when he posted a homophobic comment on Instagram that resulted in a meeting with Rugby AU CEO Raelene Castle and NSW Rugby CEO Andrew Hore.

Hooper said it wasn't easy to be back fronting the media about this issue for the second time in a year.

"It’s frustrating that I have to stand here. I can’t speak on Izzy’s behalf here today but what I can speak on is the footy we’ve got ahead and that sort of thing," he said.

"It’s hard being here, we’re rugby players for sure, we are trying to create the best team environment we possibly can and at national level."

Gibson said he was "disappointed" that this kind of situation had come around again but was confident the Waratahs would be able to respond.

"I'm disappointed in the fact that we're here again, second year running that we're fronting up around an issue that on a large extent we'd settled and the impact that it has on the team," he said.

"I think last year the team responded very well in the circumstance.

"This is not new ground for us and it's something we're going to have to do again." 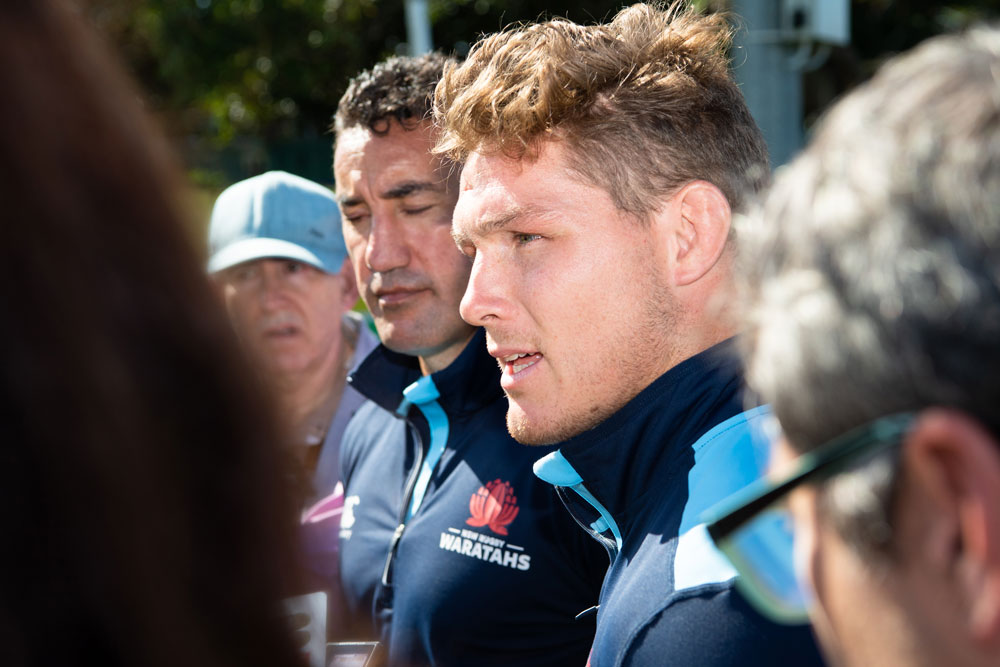 Gibson was reluctant to give a concrete call on whether he would pick Folau again, with the process set to be lengthy.

"That's all hypotheticals at the moment, I'm not sure what those outcomes could be and just how we all feel about that," he said.

Folau's brother John, who is contracted with the Waratahs, trained as normal on Monday, and while Gibson said before training he hadn't spoken to the younger Folau directly, it was something to be mindful of.

"I haven’t had an opportunity to speak with John, but, yeah definitely, it’s something that I’m very mindful of how he's feeling," he said.

Folau has said he is prepared to walk away from rugby if it is the best thing for his faith.

WARATAHS PREPARE FOR LIFE AFTER IZZY

If a decision went against Folau, the Wallabies star could potentially appeal the decision in the Supreme Court but that kind of action is well down the track.

The logistics of the process are made a little more difficult with Easter and ANZAC Day in the next fortnight as well.

While he is believed to be trying to fight for his career, Folau said on Sunday that he would ultimately be willing to walk away from the sport if it came to that.

It's a stance not dissimilar to comments he made after a similar post a year ago, in a column for PlayersVoice.

"It's obviously a decision that's in the process right now but I believe in a God that's in control of all things," Folau told the Sydney Morning Herald at a Truth Of Jesus Christ Church service on Sunday, in his first comments since his post.

"Whatever His will is, whether that's to continue playing or not, I'm more than happy to do what He wants me to do."

Folau said his comments came from a place of love.

"I'll stand on what the Bible says," he said.

"I share it with love. I can see the other side of the coin where people's reactions are the total opposite to how I'm sharing it.

"But in Ezekiel, chapter 33, verse 11, it says that 'God has no pleasure in the person that's living in sin'  ... He's a loving God and he wants people to turn away from what they're living in and he'll give them life.

"That's the message that I'm trying to share, even though it comes across as harsh. I can't change what the word of God says."