It's just over 8km from Chipsy Wood Oval in Brisbane's inner south to Suncorp Stadium but it may as well have been a world away for Quade Cooper last year.

A return to the Super Rugby or Test arena seemed a world away for Cooper, who had been determined to remain in Queensland but after linking with the Rebels in the off-season, he was quick to show the flair that made him one of the one of the most dominant Australian playmakers of his generation.

Cooper returns to Suncorp Stadium on Saturday to face Thorn's Reds and his former Souths teammates and coach will be watching on with interest.

Magpies coach Elia Tuqiri always knew Cooper would return to the top but the man who mentored him in Brisbane club rugby last year has been stunned by how quickly he has shot to Super Rugby dominance.

Tuqiri, who accepted banished Red Cooper - and then Karmichael Hunt - into the Souths fold last season, has been thrilled to see the former players' return to the Super Rugby ranks. 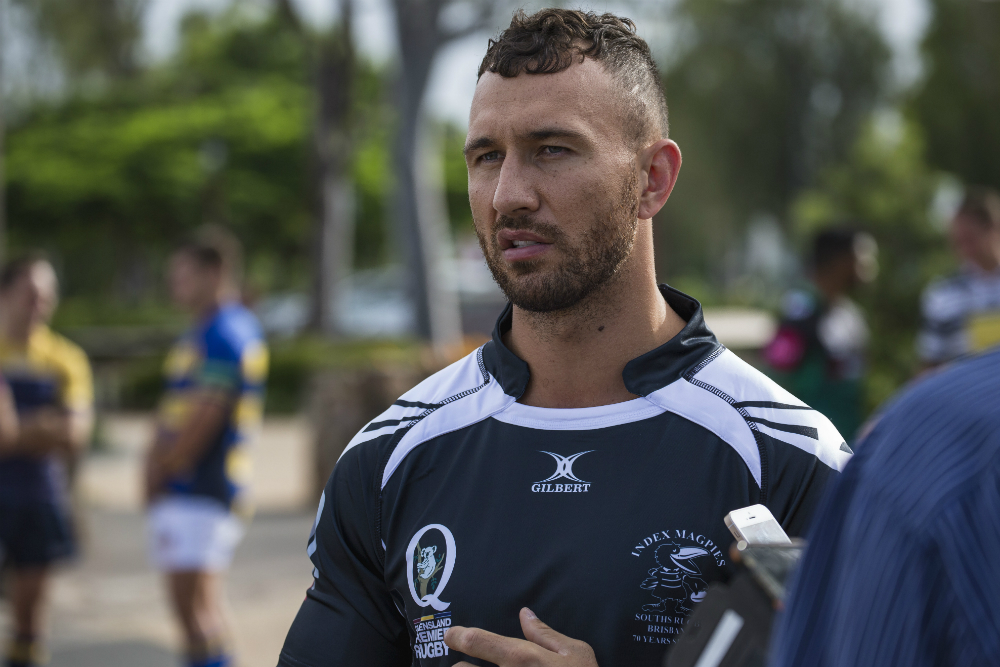 Accounts to be presented at the Queensland Rugby Union's AGM on Saturday will show the organisation is still paying towards the salaries of Cooper, Hunt, and James Slipper, who have all revived their careers with other Australian franchioses.

It's a bitter pill to swallow for some fans. But to those like Tuqiri and the Souths players, the effort of Cooper and Hunt at a local level last year showed not only that they were willing to work for another chance but they still had the ability to play at the highest level.

Cooper was outstanding for the Rebels in the opening rounds after a year sidelined from elite competition.

"I'm maybe a little surprised he's been so dominant so quickly but we knew that he was one of the top players in Australian rugby, we had no doubt about that," Tuqiri said.

"It was just a matter of how long it would take him to find his feet really.

"It's been amazing to watch him just transition straight back into it."

Cooper could have been expected to kick stones on return to club rugby after finding himself on the outer with the Reds.

But Tuqiri said the opposite happened.

The pair had preliminary discussions before Cooper joined the Magpies, with the former Wallabies ace adamant he would not allow his standards to drop. 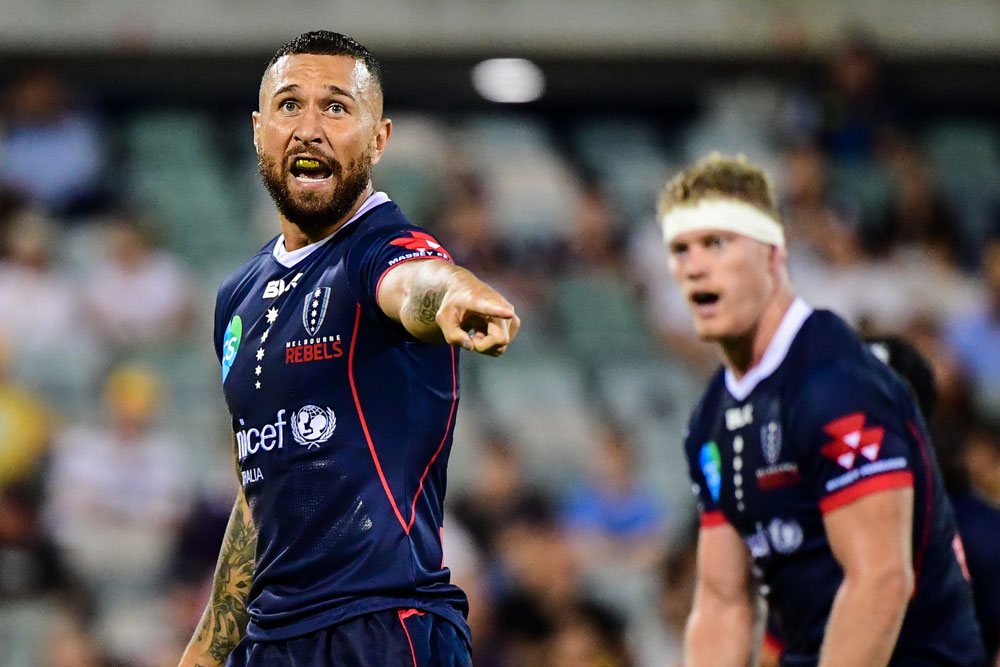 "We were extremely blessed with his presence," Tuqiri said.

"We obviously knew the calibre of player he was but it was more the frame of mind that he was going to be in.

"We had some initial chats before he came to the club and that was my concern as well and I just wanted to be frank. And we were frank with each other.

"Once he made that decision mentally, he said he only operates at one standard and he wasn't going to lower his standard just because he was playing club rugby.

"He just lifted the standards of everyone else really and as a coach you couldn't ask for too much more."

Tuqiri handed the keys of the Souths attack over to Cooper last year and was repaid in spades.

The 30-year-old is "the kind of guy who needs trust", Tuqiri says, and he believes Cooper has found that again at the Rebels with coach Dave Wessels and his new teammates.

Before making a decision on his future, Cooper met with all the Australian franchises and Tuqiri said the Rebels were the "perfect fit".

"I think he thought Rebels would definitely be the perfect fit with how he wanted to play his footy.

"Now they're playing a flat style, trying to play fast and play some really attractive rugby.

"And I think everyone in Australian rugby at grass roots appreciates (that), we're watching a product we enjoy. Finally.

"We generally see New Zealand teams doing that but not many of the Australian teams keep the ball moving.

"The Rebels, what they (did to start the season) has been great."

Souths will play the Queensland Premier Rugby season without Cooper and Hunt, who joined following a seven-month break from the game following his arrest in a Fortitude Valley car park in Brisbane, where police alleged cocaine was found, although charges against the tri-code pioneer were eventually dropped.

But Tuqiri said the pair's stint would continue to benefit the Magpies.

"We're very grateful. I know the supporters, the club, we never expected to get someone of that calibre playing club rugby and it's done wonders, not just for the seniors but all the way down to the juniors, it's been a massive impact," he said. 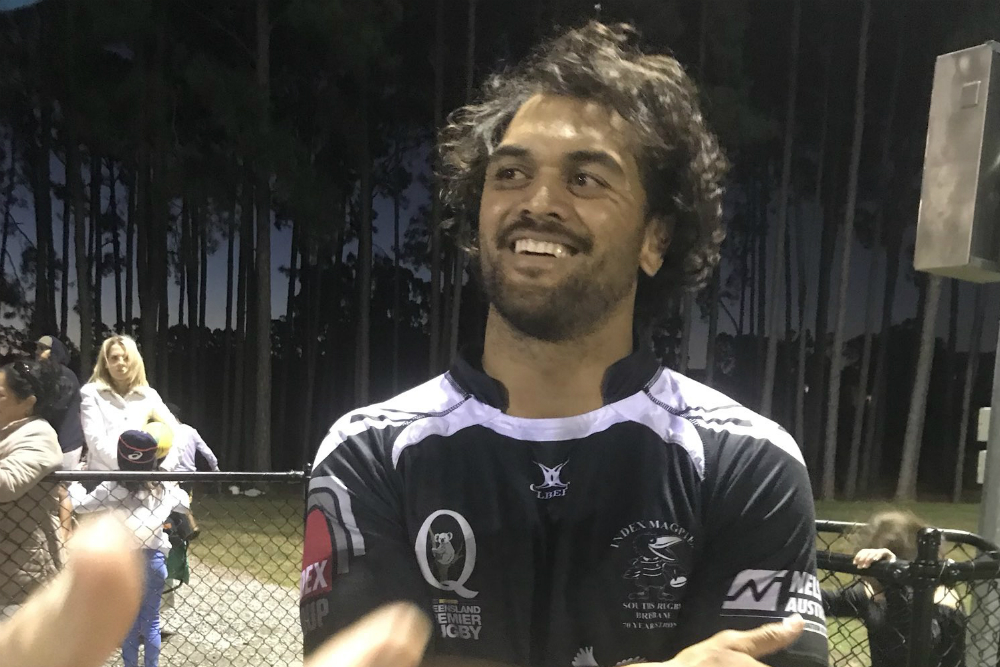 Tuqiri was also grateful to Souths for going out on a limb in deciding to offer Hunt an opportunity to play.

"I'm very grateful to the club because they're the ones that made the ultimate decision and supported myself," he said.

"There were no issues with Quade but obviously there were question marks over Karmichael coming back.

"Souths, we're a bunch of battlers out here on the southside, we don't have as many resources as other clubs but what we do have is a strong club culture where everyone just loves the game.

"I think Quade and Karmichael appreciated just getting back to humble beginnings and I've got no doubt they would have found a passion for the game in the process.

"It's just good for Australian rugby. I don't want to comment too much on the external stuff.

"But everyone deserves a second chance and we're here to help young men become the best they can be and we're just happy to see these guys continue because even though they were playing club it was obviously a waste that they were playing with us when they should be helping a franchise do well in Super Rugby, which they're doing now."