From Red to ref: How concussion turned Nic Berry into a Test whistleblower

Nic Berry was a talented Aussie halfback who played 33 games for Queensland, and in France and England, before concussion forced him to retire at 28. Recruited as a referee in 2015, Berry has risen swiftly and last week won two Six Nations appointments in 2019. He spoke with Iain Payten about his unique journey.

In the end, when a London neurosurgeon “put a bullet” in Nic Berry’s career, the main emotion was relief.

Not so much for Berry, or not immediately anyway. But it was unequivocally relief for anyone who loved him.

For 18 months, the halfback’s wife Mel and his family back home in Brisbane had been watching his games without the usual joy.

Enjoyment had given way to dread as Berry - the former Red and Australian under 21s halfback - battled through a series of concussions playing for Wasps in the English Premiership. 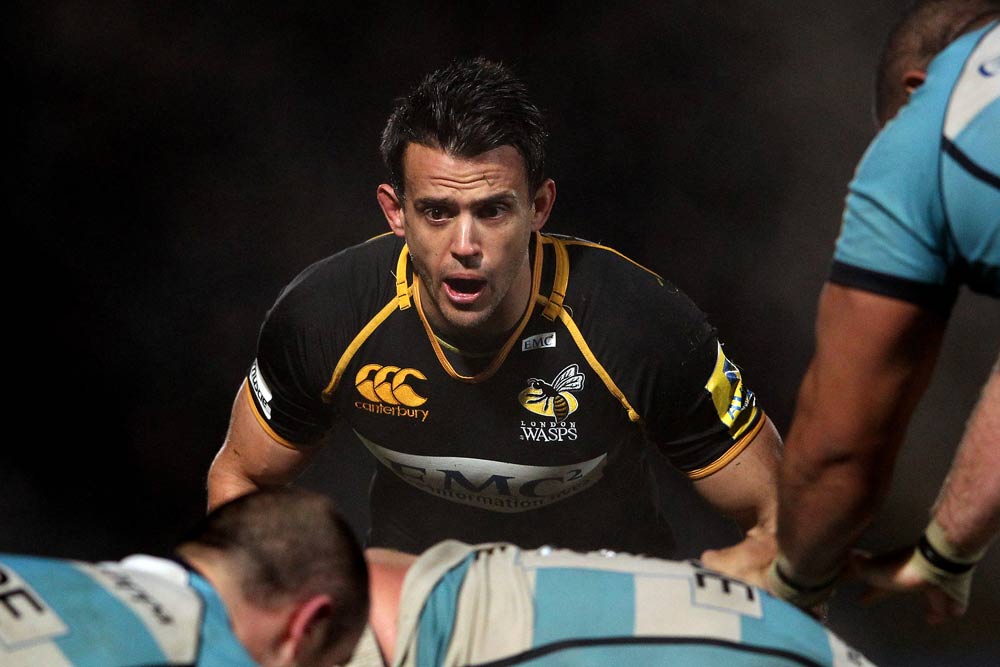 With each head knock, seemingly more and more innocuous, the heavy symptoms and slow recovery for Berry grew more and more concerning.

“The joy of them seeing me out there playing faded and became “I hope he gets through a game without getting sparked”,” Berry recalls.

Berry was 28 and a decade into a rugby career he imagined would last another five years. He’d just signed a new two-year deal with Wasps.

Modestly self-described as a “tradesman” halfback - “I was just a B-plus in most things … no superstar” - Berry had worked hard to get where he was.

The Ipswich Grammar student missed out on all the schoolboys rep teams when playing in Brisbane in the early 2000s, and started off in second grade colts at Sunnybank.

His talent and athleticism soon had him up in Colts Ones, and then in the Queensland under 19s too.

From there came training contracts with the Reds and then a full contract with Queensland. 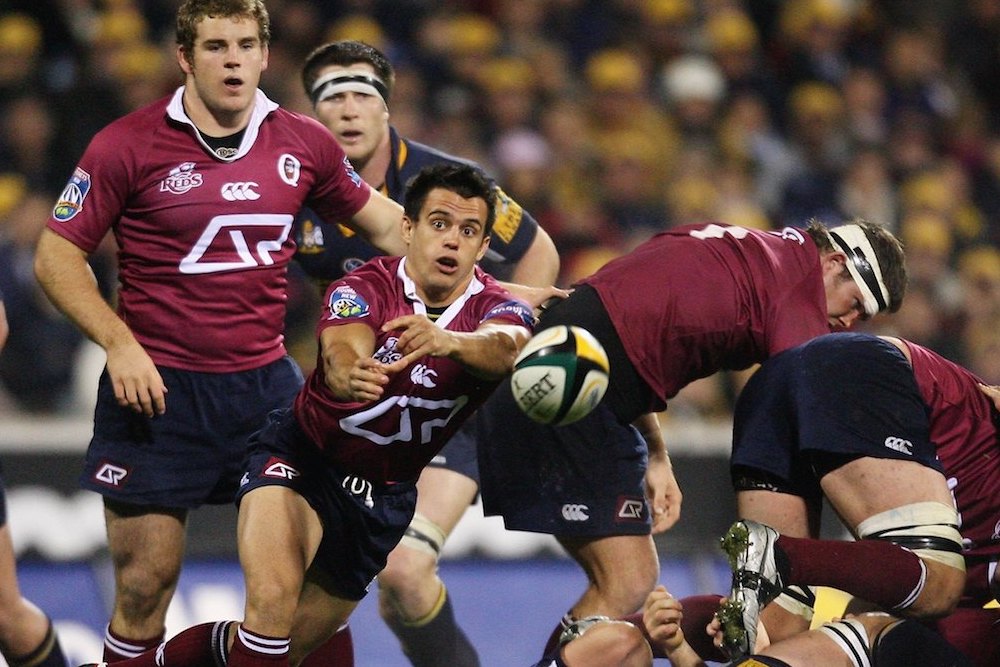 With Josh Valentine, Sam Cordingley and later Will Genia as contemporaries, Berry made a Super Rugby debut in 2005, played for the Australian under 21s and went on to play 33 games for the Reds.

But having initially only looked at rugby as a means to travel - not play professionally - Berry's wanderlust saw him take up a contract with Racing Metro in Paris in 2007, figuring 60 games across two seasons would help him return to Australia a better player.

"I thought I would go there for 18 months, miss one Super Rugby year and probably come back. The Reds gave me their blessing,” Berry said.

As the old story goes, Berry never came back.

After three years in Paris, Berry moved across the channel to Wasps in 2010 and became a starting no.9 for the strong London club.

He became a dad and was loving life but in 2011 and 2012, Berry suffered a series of concussions, and increasingly felt the cumulative impacts. Some, upon review, looked like disturbingly minor incidents.

"So I would take a knock, and then we’d go back through and I’d be able to look at the footage of the game or if we’d filmed the training session. And we’d look at it and there was just nothing there to warrant the symptoms that I was getting.

"The club was great, at the time. They were putting me in front of the best physicians and neurosurgeons. 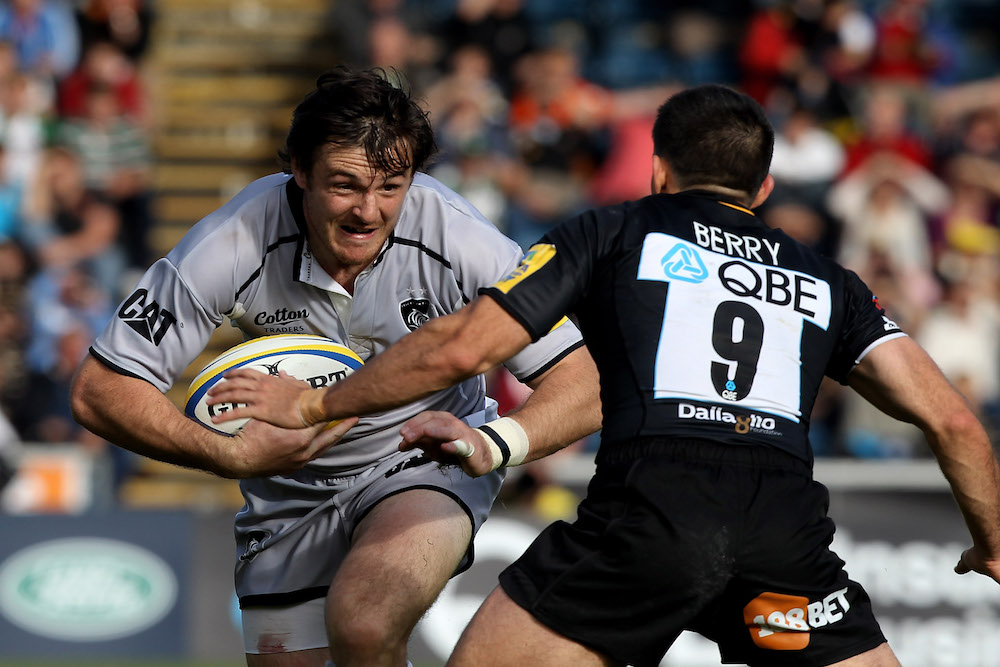 "But you kind of sat across the desk and all you’d get was “well, I wouldn’t be continuing to play if I was you”. Which kind of wasn’t enough as a player. If you can’t run, you can understand why you can’t.

"Whereas with me, physically I felt good. But it was just when I would take a knock, it would just take longer to recover and be more severe and things like that.”

While concussions are now treated with extreme caution and subject to strict stand-down protocols, Berry reminds that even as recently as a decade ago, the knowledge was still scant.

"Looking back over my career I am not bitter, and I don’t think there any intentional mismanagement about my injuries,” he says.

"All the team doctors I had at the Reds and at Racing and at Wasps, they were doing the best with what we knew at that stage.

"Not many people knew about concussions. The game has changed so much. Ten years ago, you watch any sort of Super Rugby or State of Origin, blokes would be out and they’d get back up and get a tap on the bum and the crowd would be on their feet.

"When I was playing in the Premiership, and everything was coming out of the States about the repercussions about the series of concussions for NFL players, that’s when everyone really started to catch up to speed.

"That’s when the medical teams started to take a cautious approach to things. It’s not like a knee. We can’t cut it up and fiddle around with it.” 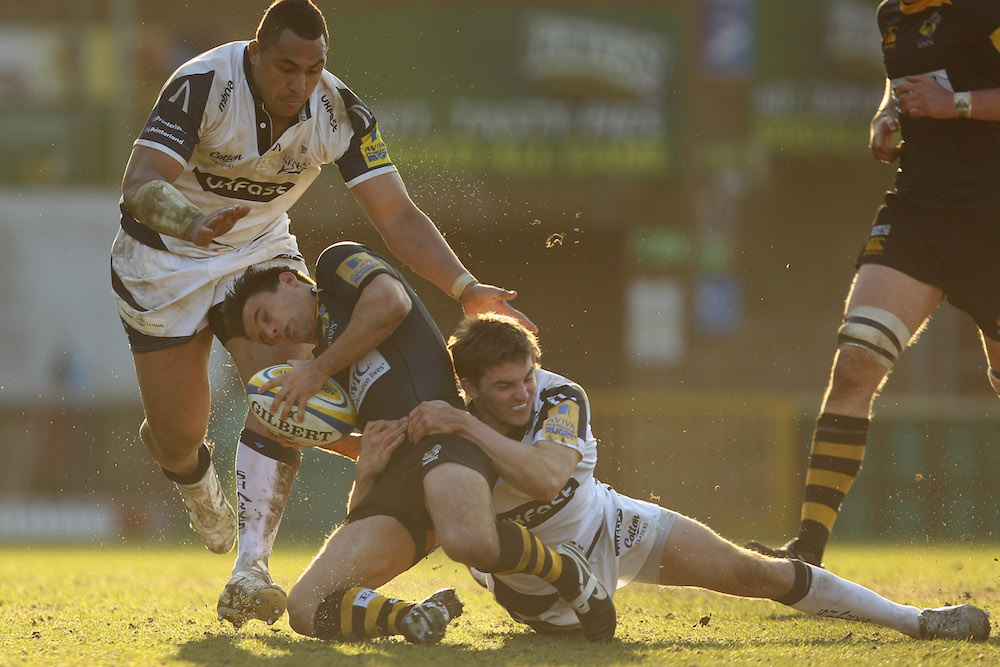 Such was the concern for Berry’s health, his neurosurgeon warned if he suffered one more concussion he’d be finished.

He did no contact at all for three months prior to the 2012 season opener but came off the bench against Harlequins, made a tackle and was knocked out.

Doctors made it official - leading neurosurgeon Professor Peter Hamlyn refused to sign off on his medical certificate - but Berry’s family had already made the same thing known: enough now. Stop.

"Seeing them and their reaction, you feel a bit selfish in a way because I love playing rugby and I still wish I could play, but when you see what you were putting your family through and all your loved ones through, you go “ok, there’s more to life than playing rugby”,” Berry said.

Berry stayed in London for a while, trained at Wasps and even ran the London Marathon on behalf of the club's charity.

“(Coach) Dai Young knew I’d go crazy if I stopped it all cold turkey,” he said. "I didn’t sit around and mope."

However unfortunate, one group saw a window of opportunity in a young, intelligent and fit ex-Red twiddling his thumbs on weekends - Rugby Australia's referees bosses.

Just as New Zealand were turning former Chiefs no.10 Glenn Jackson into an elite referee, RA referee manager Andrew Cole was searching for ex-players to make the switch in a “talent transfer pathway”.

"Coley chased me down and said: 'listen mate, we think you’d be a good referee',” Berry said. 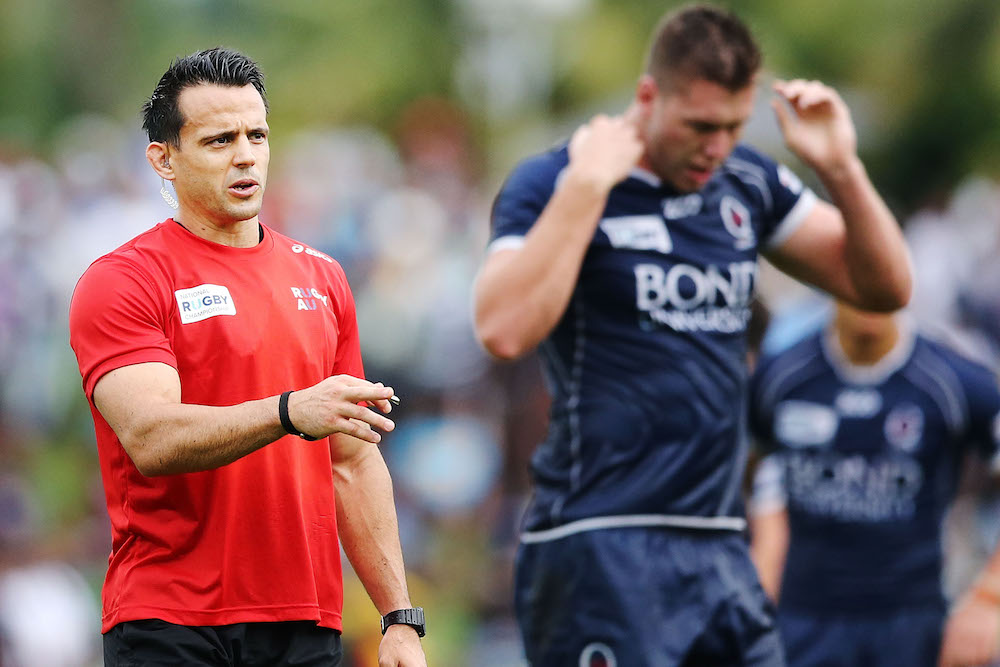 "I said “thanks but no thanks”. It took them a good six to nine months before they got me. Coley was really persistent with it.

"You grow up with a mentality of sort of “us versus them”. You didn’t think they loved the game as passionately as you did, as a player.

"But I think, now, a lot of refs love the game more.

"As a ref, you turn up and you’re on hiding to nothing. People are going to abuse you, and you don’t have that big a team camaraderie as you do as a player, which often keeps you going - that banter. A ref doesn’t get that as much.

"So you really, really have to love the game because there are not a lot of frills that go with the job, mate."

Berry relented to Cole's persistence, did some junior games in Brisbane and enjoyed it. The rest is history.

In 2015 he began doing club rugby, reffed NRC at the end of the year and by 2016 was in the Aussie ranks for Super Rugby.

Berry handled the 2017 Under 20s World Championship final in Georgia, ran the line in the Rugby Championships and in late 2017 even refereed a Test match between Scotland and Samoa. 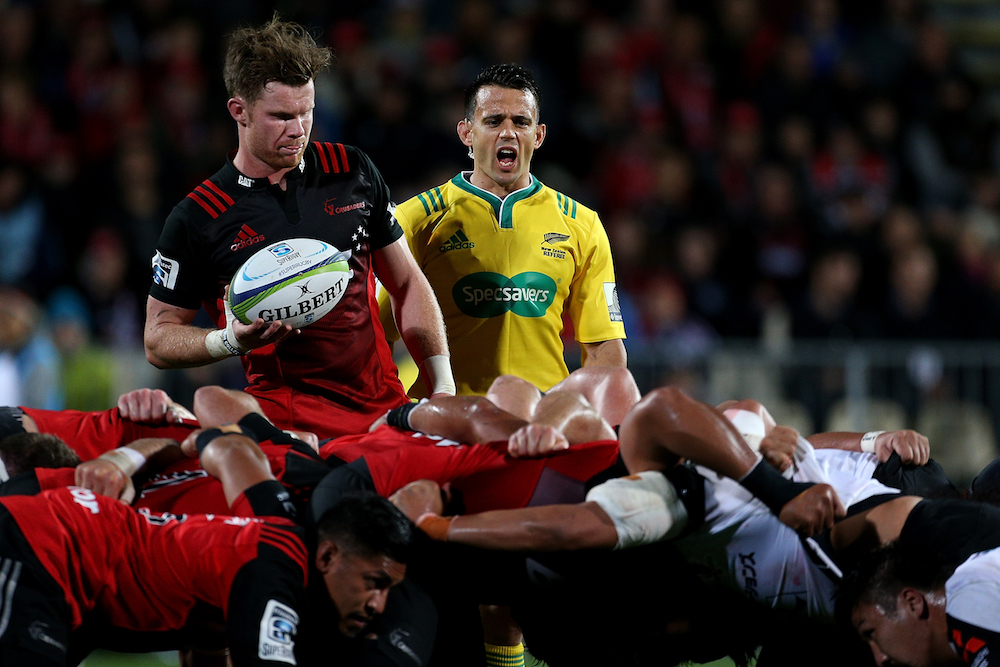 It turned out Cole had good eye. Berry was, naturally, a very good referee.

“Being a halfback probably helped the transition, because I’d be around that breakdown for so long. You’re used to making quick decisions on the spot,” he said.

"One of the things I had to work on is signalling and my communication, because I would be barking at the players like I used to as a player.

"And I needed to remember I am a referee now, and I am refeereing not just for the players but for the wider public and the people watching at home.”

Berry admits he was apprehensive about the response of his old teammates when he first refereed them on the field, where his name was now “sir”.

"A few mates had a sly chop and joked they were doing to wipe me off their phones and so on, but it was all good,” he said. 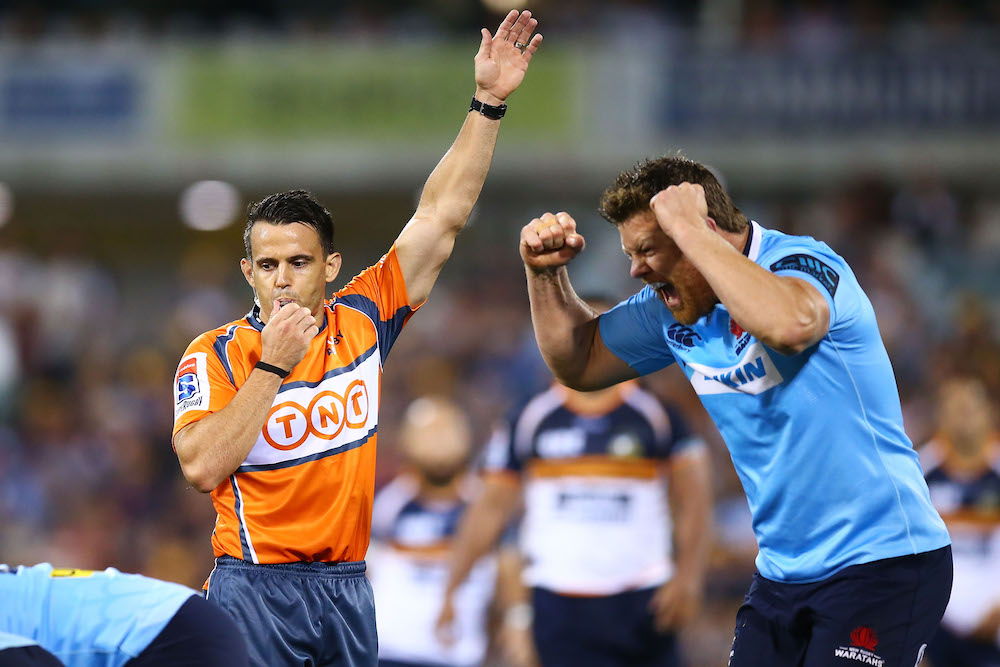 "The guys were great. They were awesome. They were overwhelmingly positive actually, about an ex-player being out there in the middle.”

While Berry is adamant ex-players don’t know the game any better than pathway referees, he concedes a playing past may give “a bit of extra leash” as far as respect for a decision goes.

Even for those baffling scrum calls - dished out by the self-deprecating “77 kilogram little ex-halfback”.

Berry says while he was around a lot of front rows as a player, he never studied their dark arts in any particular depth.

Since taking up a whistle, he has relied heavily on set-piece tuition of former Reds and Waratahs lock Mitch Chapman, who is the Rugby Australia referees coach.

Prepare well and be confident in your call at all times, Chapman tells him.

Berry’s confidence was on full display in his first tier-1 Test appointment last month when, without much fanfare at home, the 34-year-old refereed the Ireland-Argentina November Test at Aviva Stadium.

In front of 52,000 fans, the world-conquering Irish only just held off the Pumas.

"It was a cracker. It was an awesome stadium. Two good teams and it was a really, really enjoyable experience,” Berry said.

"A packed out Aviva Stadium is an incredible place to be, and the Irish are just rabid. The place was buzzing."

There were plenty of critical penalties awarded in the game but not an ounce of refereeing controversy raised post-game, and World Rugby referees bosses took notice. 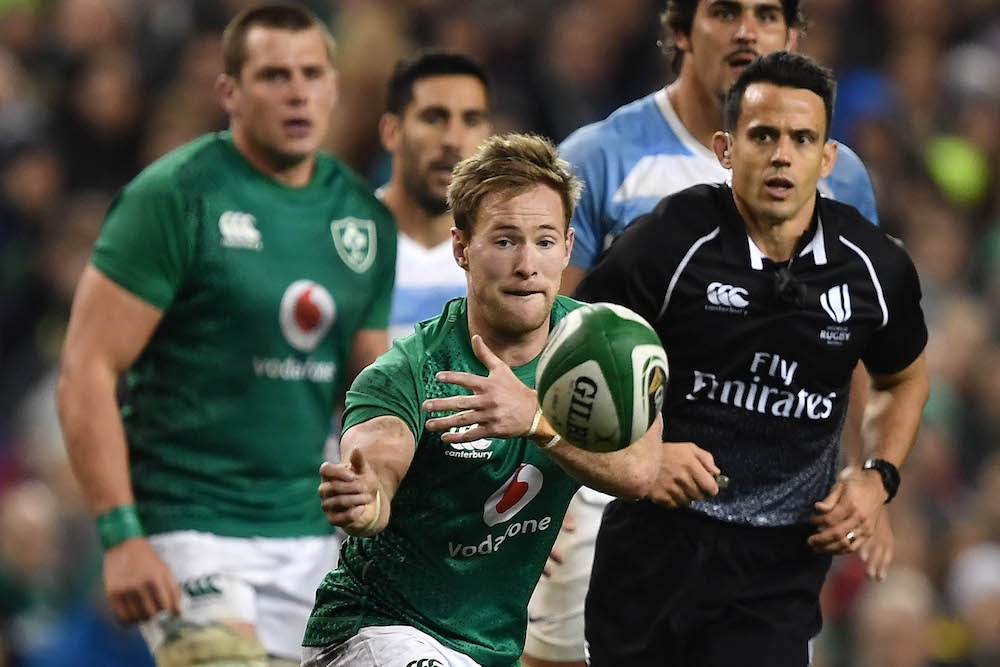 From a “tradesman” halfback to a reluctant referee who has already risen to the ranks of the world’s best young talents, Berry has come a long way in a short time.

He says he doesn’t wake up worried about the long-term impacts of his concussions, and doctors say he won’t be any more prone to health issues at an older age than others.

Doing the “bloody hard” job of making hundreds of difficult decisions every week in elite refereeing must be of some assurance too.

Refereeing in the Six Nations will be a career highlight, Berry says.

And for his loved ones it will be, once again, a joy to watch.

"I never got to experience Test rugby as a player and I always said as a player I would have given it all up for just one Test,” Berry said.

"If someone said you’ll play one game for the Wallabies but then never play again, I would have done that.

"Because it is something no-one could ever take away from you.

"I never achieved that as a player, and realistically I never expected to, but the dream of playing Test rugby is something that drives you at that stage.

"And I guess as a referee I have surpassed anything I achieved as a player.