Griffith have won back to back Uni 7s titles after a 31 - 0 win over Sydney Uni.

The second win in two weeks for Griffith has firmly pushed them to the top of the competition ladder ahead of the last round.

In a first for the competition there was two Sydney teams in the top three placings which shook up the overall series points.

Macquarie beat UQ for Bronze and are second on the competition ladder, while UQ now sits in third.

Sydney Uni has pushed ahead to fourth with their silver, and UC has slid to fifth after they placed ninth at the Gold Coast tournament.

Here's how the rest of day two unfolded on the Gold Coast.

See how day one unfolded here. 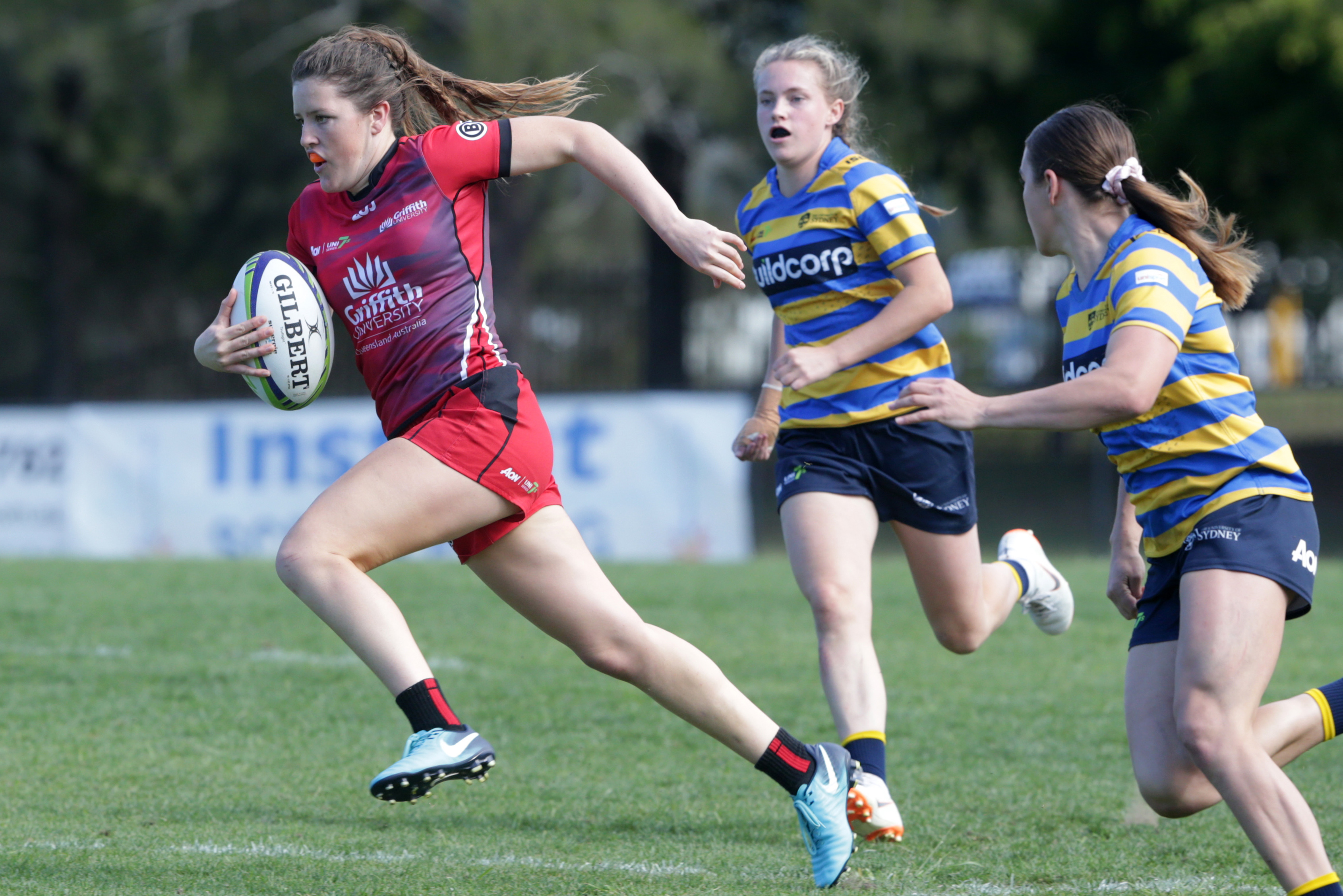 Defending champions Griffith have won their second Uni 7s title and were undefeated all weekend on the Gold Coast.

Griffith’s Kahli Henwood scored the first and only points of the first half that left Sydney Uni trailing by just seven points at half time.

Kirby Sefo scored a double in the second half for Griffith that all but sealed the gold medal match for the defending champions.

It was a tough haul for Sydney Uni who gave Griffith a run for their money despite the final score, 31 - 0.

Despite being left try less by Griffith, Sydney Uni have come away with the Silver and their best placing yet. 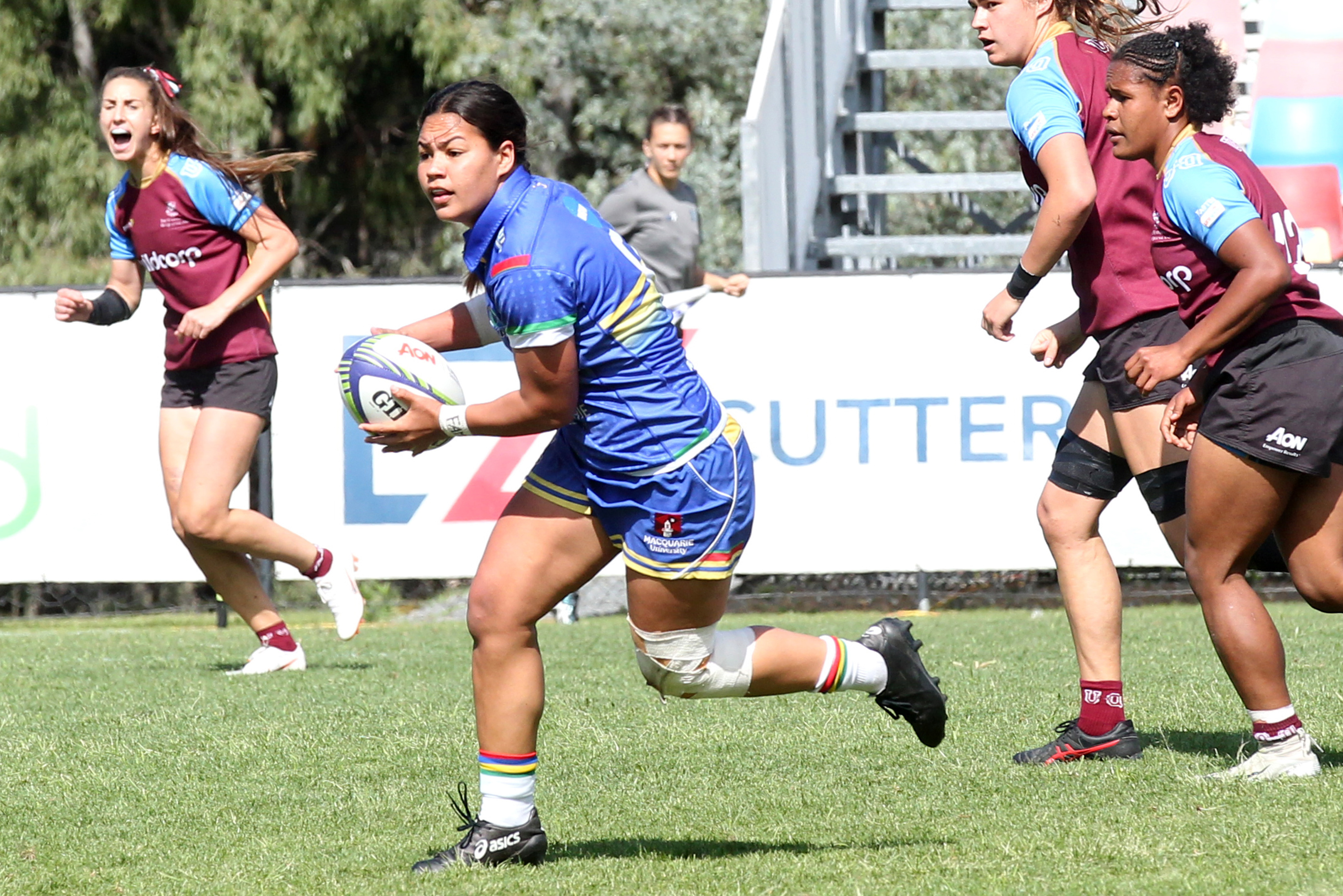 Macquarie Uni and UQ battled it out in a game that would not only settle third place but would shake up the competition ladder going into the last round of the 2018 series.

Macquarie and UQ both went three from four in Pool B and were the top two ranking sides.

In a first for the Aon 7s comp UQ were left try less by the Rays as they put four unanswered tries on the Queensland side, the final score 0-24.

In another first, UQ were pushed down the their lowest ranking ever while the Rays snagged another third. 1st fourth and 2nd third

UNE and Uni of Adelaide both had the opportunity to finish in their best standings of the series to date as they battled it out for fifth.

Uni of Adelaide were first to score but UNE immediately hit back taking the lead at half time with a double from Maya Stewart.

Stewart had grabbed her fourth hat trick of the weekend by full time and cemented UNE’s best finish of the 2018 series, a 17 – 35 fifth place win over Adelaide.

UTas and Bond Uni last met up in round one of Pool A, where Bond had a convincing 17-point win over UTas.

In a twist of events the two teams battled it out for seventh place, with UTas snagging a 16-point win over the home side.

UTas’ Kiki Morgan was crucial in her team’s victory over Bond, pushing them ahead of Bond on the overall competition ladder.

Newcomers to the competition Uni of Melbourne have taken out the wooden spoon against UC who also had their lowest placing of the 2018 series.

UC was faced with tough competition from the get-go as they were left winless in their Pool A rounds but managed to get their first win of the Gold Coast leg against Melbourne. 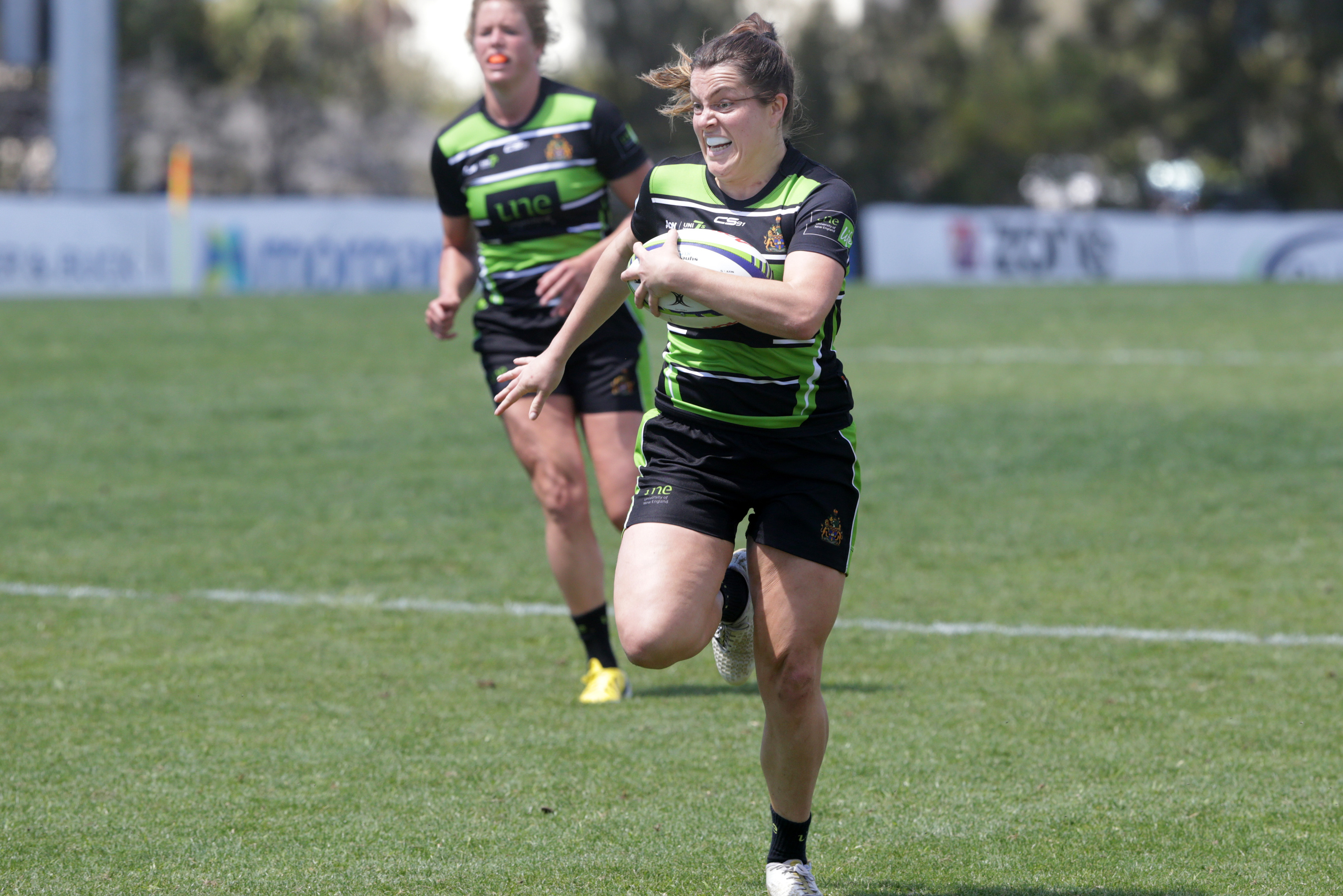 In another thrilling Uni 7s series there are two different teams vying for the title after the semi finals stages.

Sydney Uni booked themselves a spot in the big dance with a shot of winning their maiden title against defending champions Griffith uni.

Home side Bond Uni and Uni of Adelaide opened up the semi-final matches with a thrilling neck-in-neck battle.

Bond was first to score and held the lead at half-time but the Uni of Adelaide came out swinging in the second half.

Uni of Adelaide upset the home side and even a late try from Bond couldn’t quite cover the two-point difference.

Dark horses UNE dominated UTas is their semi final matchup, leaving the Tasmanian side try less until the twelfth minute.

Maya Stewart was again unstoppable for UNE as she scored her third hat trick for the weekend and snagged three of UNE’s four tries against UTas.

UNE will now battle it out with the Uni of Adelaide for the fifth-place title.

In a replay of the Brisbane 7s grand final, Griffith and UQ battled it out in a Queensland darby, the winner progressing through to the gold medal match.

A yellow card to UQ gave Griffith the opportunity to pile two tries on UQ in the first three minutes, with UQ scoring their only try just two minutes later.

A double from Charlotte Kennington gave Griffith a convincing lead and booked the defending champions spot in the gold medal match.

A thrilling Sydney darby between Macquarie Uni and Sydney Uni rounded out the semi-finals that saw Sydney Uni launch themselves into their first grand final.

Macquarie had a small two-point lead at half time but a second half try from Jakiya Whitfield sealed Sydney Uni’s lead.

Another try from captain Olivia White was the cherry on top for Sydney Uni with 7 – 15 win over the Rays. 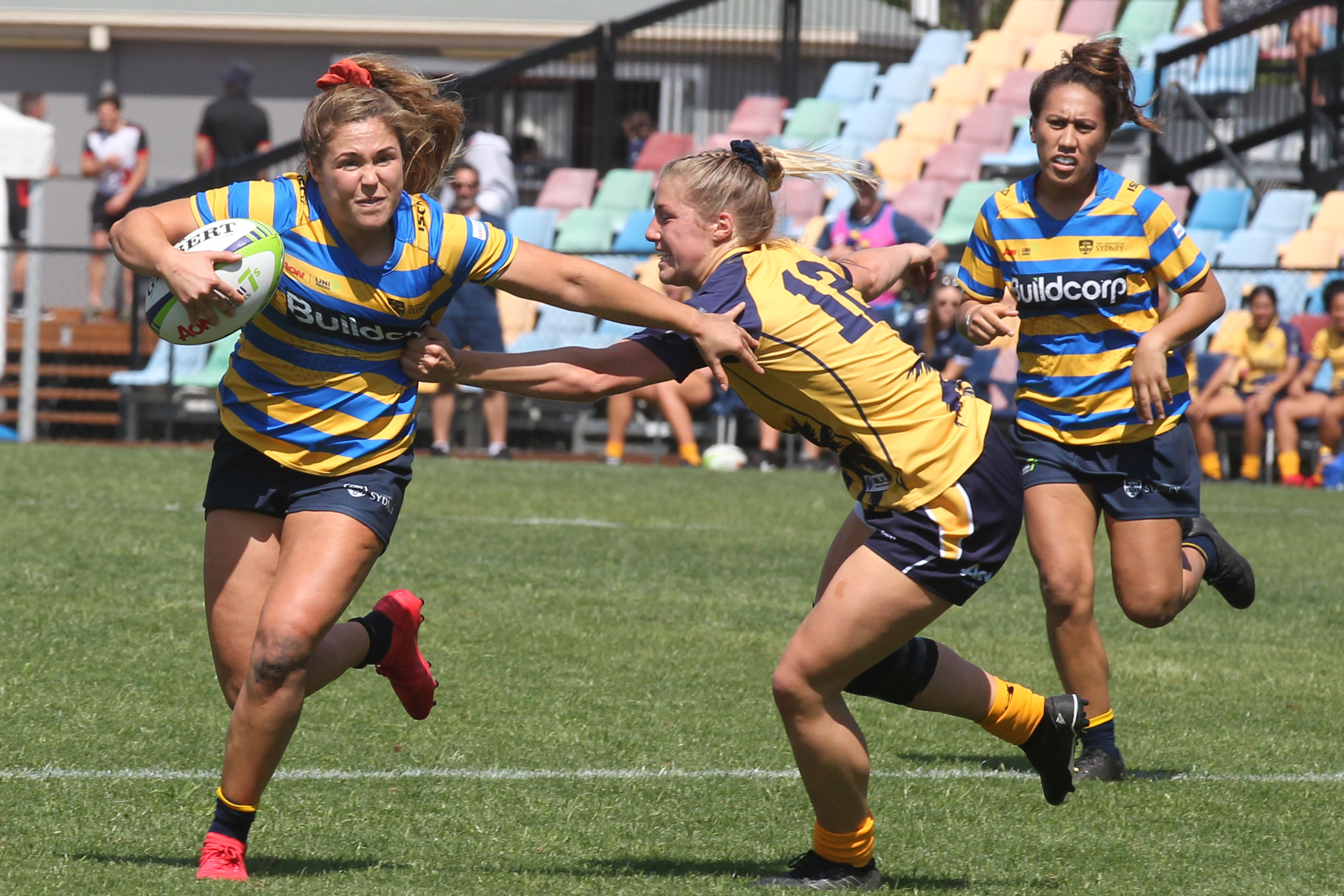 The final round of the pool stages saw match upsets and stalemates that left the Pool ladders all tied up.

UNE, Macquarie and UQ all sit on top of Pool B, while Bond and Sydney Uni are both second just under Griffith in Pool A.

Round five opened up with a Pool A upset that saw UTas dominate UC.

Eilidh Sinclair was crucial to UTas’ 31 – 15 victory, scoring a double and a total of 16 points for her side.

UC will now meet up with Uni of Melbourne in a ninth place play off.

Sydney Uni took on the home side in round five, in what was meant to decide the second spot in Pool A and was the most evenly matched game of the Gold Coast leg so far.

Bond was first to score with Sydney Uni responding immediately with their own try.

Bond Uni had the lead before half -time but Sydney Uni kept grinding away, the two sides stuck in a 12 -12 stalemate.

Macquarie cruised to a 44 -0 win, with both Montana Walters and Olivia Brooks scoring doubles for their side.

The round ended with a massive upset to UQ by the inform team UNE.

UQ was first to score in the opening minute but UNE kept pace with the champion team.

A yellow card to UQ with two minutes left on the clock gave UNE's Grace Hamilton a chance to steal the lead.

Grace Hamilton scored the match winner and then another try for good measure on full time that pushed UNE to a 24-17 win over UQ.

University of Tasmania 31 vs UC 15

University of Melbourne 0 vs Macquarie Uni 44

2pm - UC vs Uni of Melbourne