All Blacks vs Wallabies: Player ratings

by Iain Payten
The Wallabies were left to lament another Bledisloe series loss. Photo: RUGBY.com.au/Stuart Walmsley

There were only a handful of Wallabies who walked away from Eden Park with a decent mark on their exam. How did the squad rate on another black night in Auckland?

Gave the centurion Owen Franks a bit of curry in the scrums and helped build a better set-piece picture that referee rewarded. That will be critical for the Wallabies’ chances to take down the Springboks in Brisbane, which now looms as a critical game.

A decent shift from the old warhorse, and you sense with greater discipline in All Blacks territory, a tighter game driven by TPN could have been an effective way to build pressure. Lineout work was much improved this week.

Took his opportunity with both hands and along with his no.1 and no.2, helped establish a solid front row picture for the Wallabies. Decent carries into traffic too.

Fixed the line out and pulled off his standard handful of dominant tackles. There is a fire inside Coleman that the Wallabies need to figure out how to bottle, and then distribute to every other Aussie rugby player in a gold jersey.

A loose carry or two and some defensive lapses showed Tui is still a work in progress. But the sight of the towering youngster from western Sydney raging forward in the dying minutes was one of the few positives on a grim night. Tui has shown he could be the answer at no.6, and if not, definitely at lock. 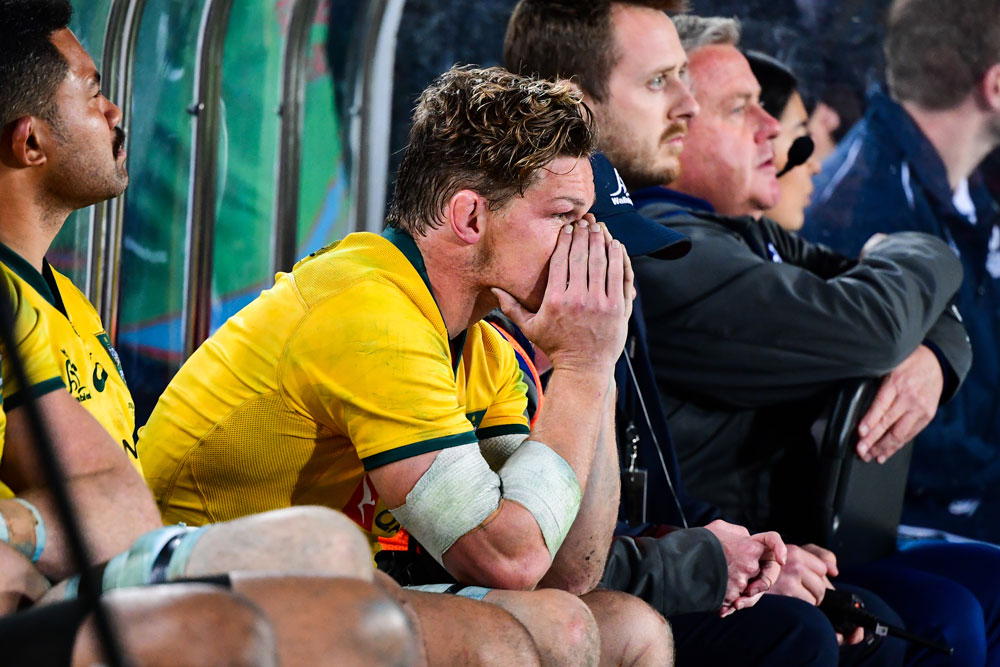 Worked typically hard but Hooper has had better Test matches. It was always a big ask to play two Bledisloe Cup games after such a serious hamstring injury, and Hooper's pace and athleticism have been below his high standard. Not alone but his decision to shoot out of the line in defence in the second half was a bad one, given it gave Beauden Barrett a gap to score one of his 67 tries.

Another colossal performance from the Wallabies’ lifeguard, be it defending, slowing down Kiwi ball (or trying to at least) and just being in the right places at the right times to save the day. Needs more help from teammates and needs protection from the referees. It's disgusting that he cops a couple of neck rolls per Test.

Genia is a class halfback and his try from the scrum-base was a perfect example of what potential the Wallabies have when they get the basics right. But as a senior leader, who has played high-level footy in Europe, it may be time for Genia to impose himself more in tactical planning.

Never stopped pushing and a try-saving tackle on Jordie Barrett, followed by a try-assist to Hodge, exemplified the fight of Foley. But the Wallabies attacking shape didn’t challenge the All Blacks seriously enough in the first half and that’s Foley’s main gig.

Used his raw speed to good effect with one attacking raid down the left edge but you get the feeling Koroibete is not getting his hands on the ball nearly enough.

The All Blacks made Beale do plenty of tackling against steamroller Ngani Laumape and big forwards, and it stifled his attacking potency. The electric attacker failed to provide his usual threat, and on those nights, it almost always ends in defeat for Beale’s team.

Scored a try but overall not a happy night for Hodge. Handling was poor early and often found himself scrambling in defence. Perhaps understandable given the difficulty of shifting to no.13 very late.

Didn’t see much ball but also didn’t make a whole bunch of errors, which is decent currency when you consider how tough a run-on debut at Eden Park must be in the relative scale. Worth persisting with in the Wallabies 23 somewhere.

Shone for the Wallabies on his return to no.15 and was the most dangerous Australian player on the field. Raises an interesting question about whether it should be DHP or Israel Folau who goes back to the wing when the latter returns from injury.

Couple of carries and some okay tight work on debut but one of those Wallabies with a first Test story they’d rather forget.

Some nights you probably wish you stayed on the bench. Lost the ball in a strip and it led to an All Blacks try.

Toiled away. Didn’t make a huge impact but few would when coming on late in a thumping.

A basic shift. Like many of the bench, didn’t bring a noticeable lift but nor was the game tight when he arrived.

It’s a mystery why Samu doesn’t get more time on the field. Second week in a row he’s been injected with the game long lost.

Late injection. Game was over.

See the Pete Samu comment. A lot of effort was spent bringing Toomua home. Be good to see him gets more time on the paddock.

Late injection on debut. No space to use his afterburners.