Thu, 12/04/2018, 2:04 amby Beth Newman
NSW Waratahs coach Daryl Gibson has named an unchanged side to face the Reds this weekend. The traditional rivals will go head-to-head at the Sydney Cricket Ground for the first time since 1983 and will wear vintage jerseys to mark the occasion.

Waratahs and Wallabies back Curtis Rona has shown his support for Israel Folau, after a controversial week for the superstar.

Folau met with Rugby AU CEO Raelene Castle and NSW Rugby CEO Andrew Hore on Tuesday over his use of social media, after an Instagram comment in which he said God's plan for gay people was "HELL...unless they repent their sins and turn to God."

Castle said on Tuesday that meeting had been a calm, open and honest one, and though Folau didn't exactly agree to refrain from similar comments in the future, the impact of his words was spelled out to him.


Folau is far from the only professional player who observes the Christian faith, but Rona is the first player to publicly throw his support behind Folau's stance, with his own Instagram post on Thursday morning.

The 25-year-old posted a picture of Folau, with the caption, "John 14:6 jesus Answered (sic), "I am the way the truth and the life no one comes to the father except through me. We stand with #IsraelFolau". 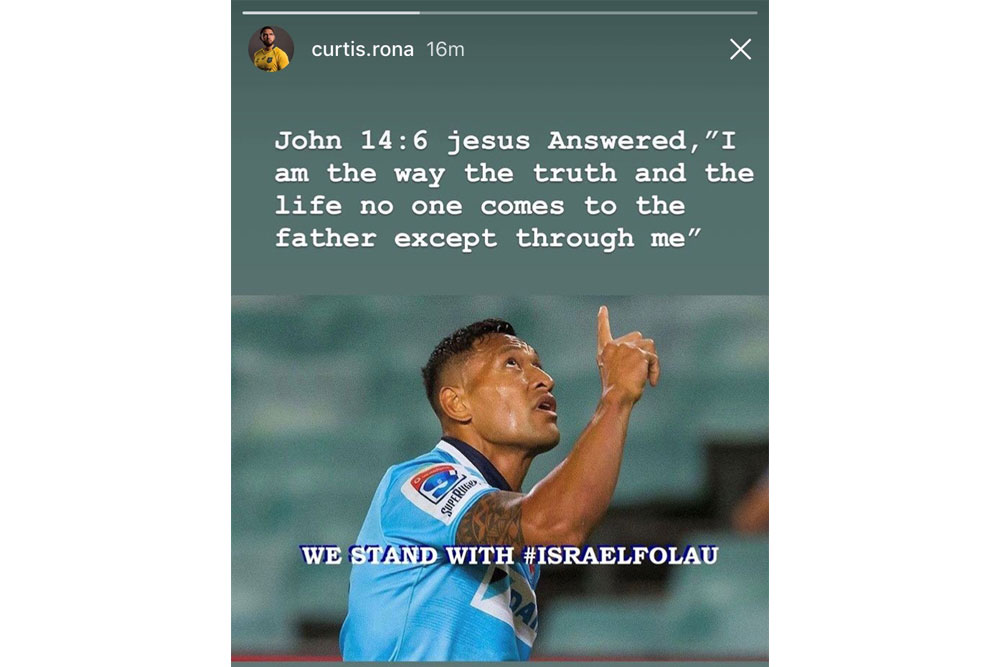 Rona is a devout Christian himself, very public about his faith and was quick to back his teammate, who has polarised opinion with his tweets.

Waratahs coach Daryl Gibson said on Wednesday that the Folau issue was an opportunity for his players to learn about the wider perception of comments they make in social media, with a plan to discuss the issue with the team.

"It's something as an organisation and taking our responsibility seriously, around stepping up and making sure we're doing a good job in ensuring our players conduct themselves well and be very mindful in how their tweets and comments potentially can be perceived by those in the public," he said.

The Waratahs take on the Reds on Saturday night at the SCG, kicking off at 7:45pm AEST, LIVE on FOX SPORTS. Buy tickets here.