Aussies take Bronze as Fiji gets three in a row

Fiji reigned supreme with a 22-0 win over South Africa but Australia has claimed the bronze medal at the Cathay Pacific HSBC Hong Kong Sevens on Sunday.

Bouncing back well from the semi-final loss to Fiji, the Aussies played smart rugby limiting the space the USA had to get the ball out wide to Perry Baker and marking the opposition tightly to win 26-19, a late try to James Stannard sealing third place.

The USA looked to be caught off guard by the pace at which Australia began the game with most of their young guns in the starting line-up.

The first try to Lachie Anderson continued his impressive form over the weekend.

Charlie Taylor showed a similar determination to get to the white line and scrambled between the posts under heavy tackle pressure. 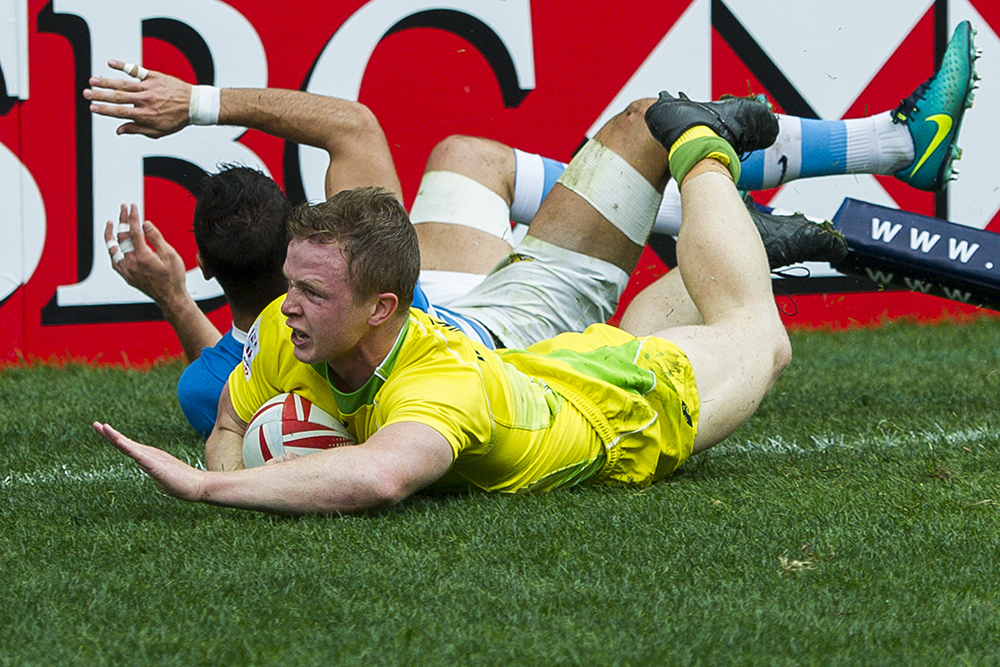 The USA steadied the momentum when the beefy Mike Te’o ran in the American’s first try to go to the break just one converted try down 14-7.

Narrowing the gap further, Ben Pinkelman scored the USA’s second but with a no conversion, Australia held a two point lead.

Perry Baker finally got his hands on a wide pass and did what he does so well even though Charlie Taylor was on his tail up the touch line.

With just a two point difference and less than a minute left the battle for the ball became scrappy.

Eventually the ball came out of the contest, Stannard picked it up and ran like a man possessed to the corner as the siren sounded to secure the Bronze medal for the Aussies.

How good! The lads with their bronze medal, now off to Singapore to go two better! #HK7s

“I thought our boys did incredibly well after the loss to Fiji and bounce back the way that they did,” he said.

“They showed a lot of belief and composure to beat a good USA team to finish third. I’m proud of them.

“I think we are playing some really good Rugby but we still have a lot of room for improvement.

“This is a really exciting group and the important thing now is to keep this group together to keep building towards Tokyo 2020.”

Henry Hutchison again performed well scoring five tries for the tournament and being named in the Hong Kong Dream team.

Your Hong Kong Dream Team. Seven superstars, but who would you have chosen? #HK7s pic.twitter.com/1fnmvQn3YJ

The final day capped off another massive annual tournament for Hong Kong.

The cup semi-finals were very different encounters with Australia dealt a lesson in fast and furious sevens by Fiji, while the USA pushed the series leaders South Africa to extra time after a 24-24 scoreline at full-time. The Golden point was eventually scored by Ruan Nel and meant the Blitzboks had progressed into a seventh tournament final.

Australia finally got some reward for effort with a young line-up supported well by some experienced heads and finishing with five wins from six games over a tough three days.

The cup final was a display of supremacy – not by the series leader but by the team which has made this tournament its own, especially over recent years.

Fiji was endeavouring to win its third consecutive Hong Kong title and laid down its statement of intent by scoring the only two tries of the first half leading 10-0 at the break.

South Africa barely got a hand on the ball as Fiji ran in another two tries with a second-half double from Kalione Nasoko.

The game began at a frantic pace and Fiji played with a ruthlessness which South Africa could not counteract.

Australia won its Cup quarter final and made its way through to the semi-finals after defeating Argentina 21-12.

Coming off the back of three good wins in the tournament so far, the Aussies seem to have found some cohesion in the way they play as a unit.

The game was played at a frenetic pace from the outset and Argentina were the first to get to the try line through young star Matias Osadczuk.

Australia was prevented from getting any consistent possession as Argentina threw everything at them in the early minutes of the game.

Boyd Killingworth eventually found a gap in the opposition line and using sheer pace, ran half the field to the posts.

With the score all tied up 7-7 at the break it did not take long for ‘King of the Corner’ Henry Hutchison to score Australia’s second.

As the first half pace started to take its toll on the players late in the game, Tom Lucas exploited a big gap in Argentina’s defence and ran in Australia’s third try.

Argentina salvaged some pride with a try after the final siren but Australia took the victory 21-12 to move into the semi-finals.

Qualifier - New member of the Family

Meanwhile, Spain will return to elite sevens after defeating Germany in the qualifier final in Hong Kong Sunday - with one veteran player saying the team "deserved to be back".

The Spanish regained their "core team" status and will play with the world's leading sides such as Fiji and South Africa next season after defeating Germany 12-7.

The victory comes five years after they were last promoted to the world series in 2012, before losing their place two years later.

Speaking after celebrating their victory, Spain's Angel Lopez said: "We deserve to be back in the circuit - we have the experience and the team to
get back into the series and play well."

The action moves to Singapore next weekend with the eighth leg of the World Series.