The ARU has offered counselling for to its players, after Dan Vickerman's shock passing on Saturday.

ARU chief operating officer Rob Clarke, speaking to reporters in Canberra on Monday, said the governing body and the Rugby Union Players' Association had extended the offer to any player who needed it, especially Vickerman's former teammates.

"Between the ARU and RUPA, there's a lot of help on hand and that offer has been put out to all players, particularly those that played with him at the Brumbies, at the Waratahs and the Wallabies," he said.

Clarke headed up the Brumbies when Vickerman made his Super Rugby debut and paid tribute to the 63-Test Wallabies lock on Monday.

"Dan was here when I was CEO of the Brumbies and he was a gentle giant of a man," he said.

"A wonderful player, as you saw [former Waratahs captain] Phil Waugh's comments today that when you had Dan in a jersey running out beside you, you felt an extra level of confidence and that was the sort of guy he was.

"To have something like this happen at his age of 37 with a young family is just simply beyond belief and everybody in rugby is mourning him." - Rob Clarke

Clarke admitted sporting organisations needed to be more proactive when it came to players' mental health.

"I think it's something that we, as administrators, need to continue to be ever vigilant on and the transition from being a professional sportsman into the world after sport can be challenging and we've seen it in a number of sports and we are looking at how we can invest expertise and resources to try and help smooth that transition for all of our players and I know a lot of the other sports as well." 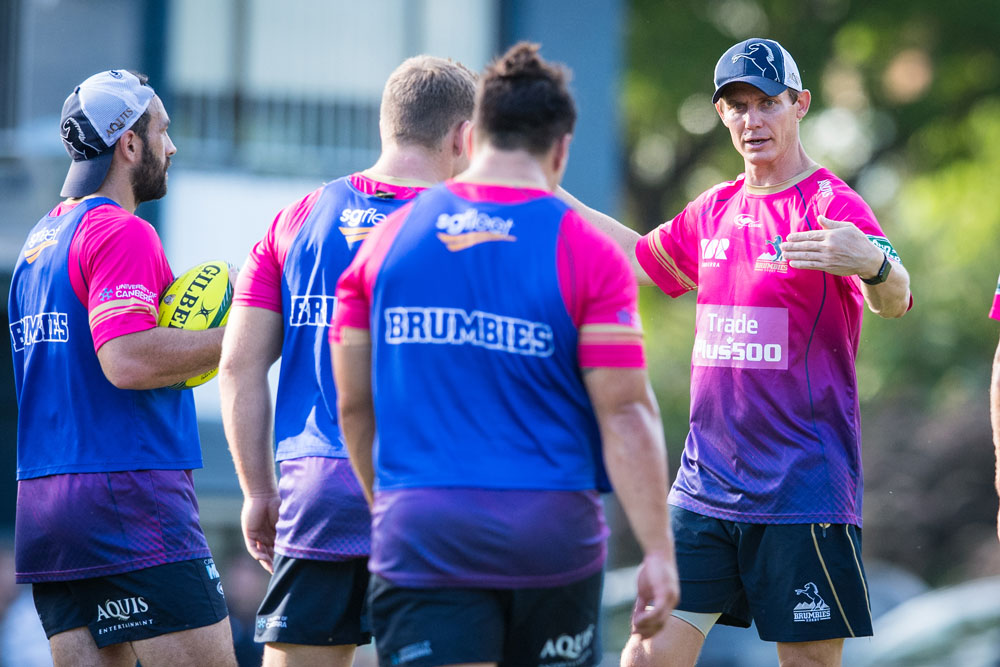 “It’s very sad and tragic news and my heart goes out to Sarah and the kids,” he said.

“Dan was a well-respected individual in the rugby community and someone that the players looked up to. He was uncompromising and consistent and was certainly one of my favourite players to play with. - Stephen Larkham

“At our pre-season camp when we asked the group to select their greatest ever Brumbies team, Dan polled on a number of the lists which shows the respect in which he was regarded.”

Vickerman was found in his family home overnight, dead at just 37, and social media was flooded with tributes for the 204cm second rower as the news filtered around the world.


Waratahs CEO Andrew Hore offered his sympathies upon the news of the 53-cap Waratahs lock's death on Sunday. "Dan was well respected for his on field leadership and performance and equally respected by all that knew him off the field.

“His tireless commitment and passion to helping improve Rugby as well as his commitment to supporting players throughout their careers through his role with RUPA, is a legacy that will long live on. - Andrew Hore

“The shockwaves of his tragic passing will be felt right across our rugby community.  Our thoughts are with his wife Sarah, their two sons and other friends and family during this difficult time.”

Eddie Jones, who coached Vickerman through his early Test days, joined the chorus of tributes on Sunday night from England.

"On behalf of the RFU and myself, I would like to send my condolences to Dan Vickerman's family, Sarah and the two kids," he said in a statement..

"He was a wonderfully committed team player and a good guy. He will be sorely missed by the rugby community." - Eddie Jones

Vickerman played for the Waratahs and Brumbies, but tributes were not just restricted to his former rugby homes.

The #AllBlacks join the rugby family in mourning the passing of former Wallabies lock Dan Vickerman. Rest in Peace. pic.twitter.com/uBxw8zK7tm

Our thoughts and condolences go out to the family and friends, and all who knew Dan, at this difficult time. RIP Dan Vickerman.

On behalf of the Rugby community in Queensland, the QRU sends its condolences to the family following the passing of Wallaby Dan Vickerman.

Hard to sum up but Dan Vickerman was just one of the good guys. Brutal on field, terrific bloke off it. Loving dad. He'll be missed by many.

Shocked an old team mate Dan Vickerman has passed away..Grateful to have played along side you..Thoughts & prayers are with his wife & 2kids

Waking up to sad news about Dan Vickerman this morning. Always enjoyed playing against him. A real competitor and a great guy.

Wow, I'm absolutely shocked by the news of Dan Vickerman, a true role model for Rugby union on and off the field! #RIP #RugbyUnion

Shattered to hear the news of Dan Vickerman passing away overnight. I never felt safer when the Big V was on my team. Such a tough & loyal team mate. We'll all miss you mate. Love to your family during this incredibly difficult time. #ripBigV

Vicks was somebody everyone loved playing alongside. Learnt so much from him. Thinking of his family and team mates. Rest in peace mate.

Our thoughts and condolences go out to Dan's family and friends at this difficult time. RIP Dan Vickerman. https://t.co/Ycl92ecXZ9

So sad to hear you have left us Big V. A wonderful friend, mentor and player. I'll miss you mate. #RIPDanVickerman

Poor Dan Vickerman and his poor family. Beyond Sad.#rugbyfamily.

Our thoughts are with the friends and family of Australia's Dan Vickerman, who has passed away at the age of 37 pic.twitter.com/PsgfbGpDQB

Our thoughts are with the family and friends of Dan Vickerman who has sadly passed away aged 37. Rest in Peace.#RugbyFamily pic.twitter.com/OEn3iyEjsn

CURUFC is devastated to learn of the death of former Captain Dan Vickerman (2008, 2009). https://t.co/8XaSlLgpmi pic.twitter.com/LQJQNhixkG

Our thoughts & prayers are with the family & friends of Dan Vickerman & the rugby family in @qantaswallabies. Rest In Peace Dan. #rip

Incredibly saddened waking up to the news of Dan Vickerman. A true gentleman of the game. Thoughts are with his family.
Rest easy Vicks

Incredibly sad to wake up to the news about Dan Vickerman. One of the greats on & off the field Thoughts are with his family
Rest Easy Vicks

Saddened to learn of the devastating news of Dan Vickerman. Shocked!Absolute legend of a bloke. Rest easy big fella

So sad, Wallaby family has lost a great player & even better bloke off the field. Thoughts & prayers with Vicks family, friends & teammates

Just horrible sad news to wake to.. The big V.. Always a protector for me on the field & a great drinking partner off it.. Rest easy Vicks 😢

You will be missed but never forgotten..