by Brett McKay
The Rays will have a home-semi final against Perth Spirit next weekend. Photo: Getty Images

The Sydney Rays have beaten Melbourne Rising 38-32 at Frankston Park in Melbourne’s southeast, ensuring both teams will play in the Buildcorp NRC Finals Series next week.

The Rays were a chance of claiming top spot with a bonus point win, but after leading 38-16 at halftime, couldn’t add any further points running into winds measuring upwards of 80km/h.

The Rising also needed to secure a losing bonus point if they couldn’t win, to stave off the possibility of being leapfrogged into fourth on the table by the University of Canberra Vikings.

The Rays’ win means the Rising will play NSW Country next Saturday in Newcastle, while the Rays will host Perth Spirit on Sunday at Pittwater Park in Sydney.

The Rays took the early territory advantage in the first half with the strong and gusty wind behind them, with flanker Jack Dempsey crossing after just four minutes, and centre Con Foley scoring from a lovely passage after the Rays regathered from the kick-off.

Stand-in skipper Angus Sinclair was up against it trying to converts tries, but landed his first and the Rays led 14-0 after seven minutes of play.

Melbourne hit back with two quick tries of their own, though, first with fullback Jonah Placid finishing off some nice work to score behind the posts, then lock Steve Cummins finished a beautiful tackle bust and break from returning no.8 Colby Fainga’a.

Lloyd Johansson’s conversions had the Rising up 16-14 with first quarter of the game gone. 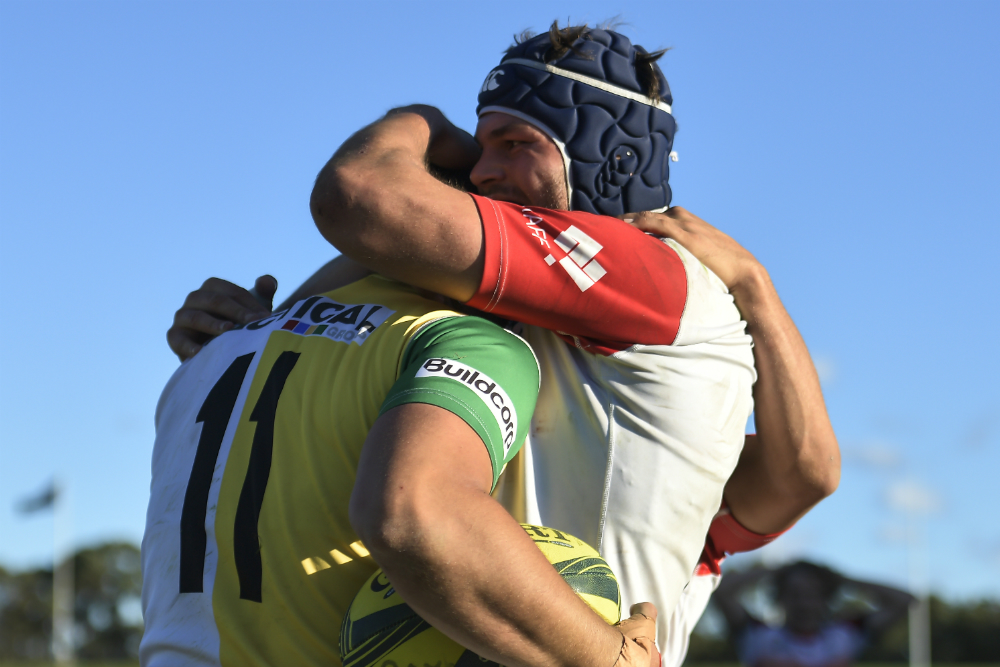 The Rays took the lead back only minutes later, scrumhalf Dewet Roos scoring next to the posts after Dempsey found some space down the left edge and pinned the ears back. Sinclair’s conversion pushed the Rays back out to 22-16.

The visitors extended this out to 30-16 ten minutes before halftime, when winger Harry Jones scooped up a loose grubber kick through from Placid and running it around behind the posts.

Irae Simone then scored on the stroke of halftime to put the Rays into contention for the crucial bonus point they needed to pinch top spot from NSW Country. But the big question, leading 38-16 at halftime, was whether the lead would be enough, with the Rising to come home with the wind behind them.

The Rising scored first after the break through prop Tyrell Lomax, and Johansson’s perfect record off the tee brought the lead back to 14 points, and importantly, took away the Rays’ bonus point.

Melbourne enjoyed territory domination for much of the second half with the wind at their back, but their execution was continually letting them down. Just when they would get into position to threaten, they would cough up the ball.

Young gun Sione Tuipulotu had threatened all day for Melbourne, and made a wonderful line break in the 76th minute and offloaded to Tom English, with the Rebels centre racing away to score under the posts and bring the margin back to just six points.

That meant the Rising did enough to hold onto fourth spot, and that NSW Country would finish the campaign as Minor Premiers.