Neither footy nor faith will define young Waratah

David Horwitz doesn’t want to be a gimmick, he just wants to be a footballer.

Waratahs back Horwitz is the only Jewish Super Rugby player and possibly the first in history, an ironic turn of events, having started school at Moriah College.

“I still remember my dad saying to me, ‘Not everyone in the world is Jewish,’ and at Moriah it’s almost like a little bit of a bubble because everyone you interact with and family friends and you never get to see the other side,” he recalls.

Though it is not something by which he wants to be defined, it’s hard for him not to feel like somewhat of an ambassador – he was named Jewish Sportsman of the Year last year.

“I don’t want to be known for that kind of quirk or gimmick,” he said.

“I want to be known as a footballer on merit and I also want to be known in the Jewish community because I’m a proud Jew and I know that does coincide with the rugby because it’s almost a strange thing because there’s not a lot of Jewish sportsmen out there.”

Horwitz’s rabbi, Rabbi Levi Wolff from the Central Synagogue in Bondi Junction attended the Waratahs clash with the Rebels, a moment that held special significance for Horwitz.

MY FIRST RUGBY UNION GAME AND LESSONS FOR PESACH I’ll be honest, Rugby Union is a whole new world for me. Aussie kids are brought up playing and watching it, but what does a boy growing up in Brooklyn know of Rugby? Along with my sons, Ephraim and Moshe, we had the opportunity to watch our first ever game of Rugby Union. We saw the NSW Waratahs play and proudly sat with the parents and siblings of one of our younger Central Synagogue congregants, David Horwitz. Why? Well, David plays for the NSW Waratahs and as far as I know, is the only Jewish player in the entire competition. As it happens, The Waratahs were not the victors that night, rather the vanquished. David and his family had arranged to meet up immediately post-match at the bottom of the stands. But David was frustrated with the loss and simply burst into his dressing room. There was no chit-chat. There was no banter. And that was okay. What a chasm there is between the sportsperson and the spectator! In the stadium, we watched, we discussed and for the vast majority of onlookers, soon after we went home to resume day-to-day life. Not so with players. There is such a heavy investment made that a loss cannot be easily dismissed. All this got me thinking: When our ancestors left Egypt on the very first Pesach, we, the Jewish People, stepped up and assumed the powerful position of player as opposed to spectator. We were summoned by G-d to take an active role on the world stage and not just remain passive. We were elevated to assume the responsibility of partnering with G-d. No longer on the sidelines, we charted our own course for the first time in hundreds of years. Looking to the future and upon receiving the holy Torah, we were given a roadmap by G-d to build a better world, and today, we must never forget that privilege! Rugby Union is a global sport played in 100 countries across six continents and has long been described as the game played in heaven. I cannot confirm or deny this assertion – all I can say is … #GoTahs #GoDavid #HappyPesach. Shabbat Shalom! Rabbi Levi and Chanie

“There’s nearly 1000 people that goes to his synagogue and listen to his sermons so for him to show that individual care and come and sit with my family  and try and understand that part of my life even though it’s so foreign to him, it’s great,” he said.

Horwitz is pragmatic when it comes to practicing his religion, realistic about having to play on Shabbat, or observing fasting holiday Yom Kippur.

“When I’ve talked to my parents about it they’ve been quite flexible that this (rugby) is my passion, this is what I want to make a career out of and you’ve definitely got to make sacrifices because of that,” he said.

But his religion is something that helps keep his rugby in perspective, among a number of elements of his life that he balances, also studying for a commerce degree at Sydney University.

“Although rugby’s so important to me now, it is a sport at the end of the day, a game.

“It’s one that I work very hard on and I am passionate about but whenever it all seems like it’s getting too much it, it helps me to think back to the fact that it’s not the biggest thing in life.”

Sydney-born and bred, Horwitz opted to stick out his apprenticeship at  the Waratahs because of, rather than in spite of, the star-studded backline and it’s their linchpin in Bernard Foley who has been his greatest influence.

“For someone who has to look after so much for himself with his Waratahs, Wallabies duties and honing his own skills, he’s given me so much time to answer any of my queries,” he says.

“I’ve definitely found at this level the players who are experiencing it at the moment rather than the coaches who have played a couple  of years ago almost know the footy better, so Nard’s been almost more crucial in my development than any of my coaches.

“Whenever I have question about a skill aspect or want to do some drills after training he’s always there to help me and been really good to have someone to go to like that.” 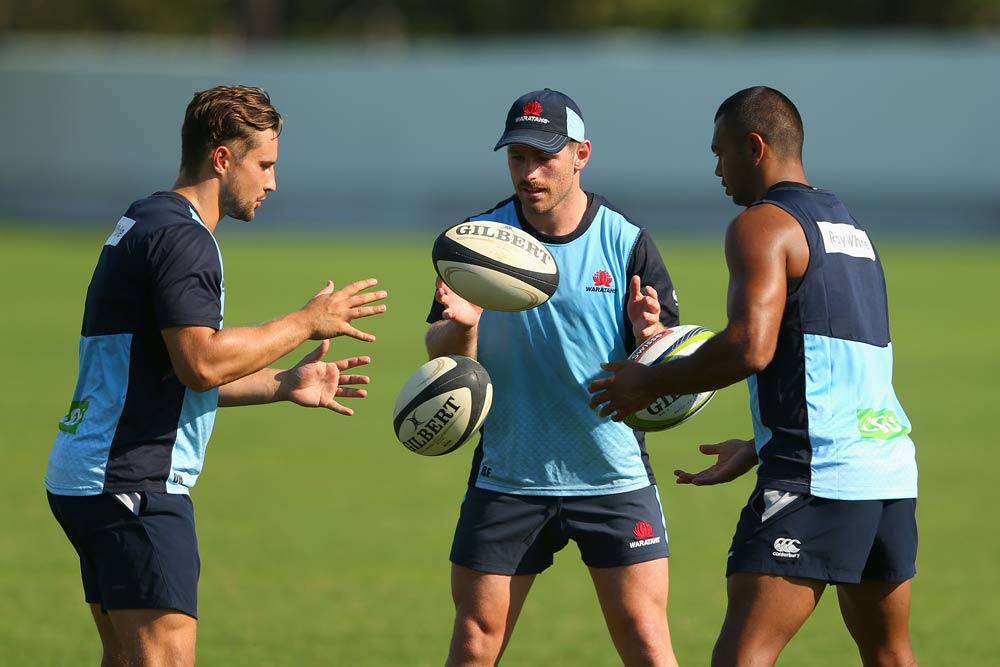 Horwitz has been playing mainly cameos for the Waratahs this season, after starting the season at inside centre, though that could all change with Kurtley Beale set to head overseas at the end of the year.

“All you want to do is go out there and contribute and try do some positive things for your team,” he said.

“I guess I got a taste earlier of starting and having an 80-minute performance and now I’m getting little snippets here and there off the bench where I’m really trying to leave my mark but also sometimes the ball doesn’t come my way in my short stints.

“It’s a learning curve, I definitely want to show the coaches that I can be impactful off the bench but obviously I’m also chasing that starting role and (wanting to) cement my spot in the team.

“I’d like to think that I’m trying to push the guys in front of me or even cause kind of a reshuffle in the backline to get in the team.

“The only way you can do that is on the field or at training so I’ve been trying to push a little bit harder the last couple of weeks to get back.”

A flyhalf and inside centre at schoolboys and U20s level before playing 10 for Randwick, Horwitz said he’d be happy to fill that number 12 role long-term.

Speaking before Beale’s decision was confirmed, a move that would put Horwitz in the box seat for a starting spot, 12 was where Horwitz saw his immediate future.

“Whatever can get me in the team,” he said.

“At the moment I’m really liking 12 because it’s a bit of the pressure off me kind of the calling side where I don’t have to worry about the team’s patterns.

“It’s just kind of doing my role in defence and then being that second ball player in attack trying to take a little stress off the 10. So I think 12’s I’m feeling quite comfortable there at the moment.