Pocock \"hurting but desperate to play\" against England, Beale out of 23

Thu, 22/11/2018, 4:57 pmby Beth Newman
Wallabies youngster Jack Maddocks was wearing a suit in the stands at Twickenham last year, this time around he's starting on the wing. Meanwhile, 102-Test prop Kepu finds himself back in the XV with the side set to wear the Indigenous jersey.

Wallabies coach Michael Cheika has admitted David Pocock is not yet fully fit despite being named in their team to face England.

Pocock sat out training on Monday and was limited to light duties on Tuesday and Thursday before being included in Australia's 23 for the weekend's Test against England.

The no. 8 has been battling neck issues for much of this season and a hit in the Wallabies' 26-7 win over Italy in Padova aggravated those symptoms again.

Though he has been an absentee for a lot of training this week, Cheika said they would give the 30-year-old every chance to play.

Asked if Pocock was 100 per cent fit, Cheika was frank.

"Well I wouldn't say fully, no, I'd rather be fair and square about that, otherwise he would've been training today, wouldn't he?," he said.

"He's had them at him all year. He puts his head into places people go to and he’s copped a fair few whacks sin there this year. So, he’s certainly not scared to keep putting his head there. Hopefully it'll get looked after when he's in there."

While the Wallabies will give Pocock every last second to prove his fitness, Cheika said they wouldn't be taking any undue risks with his health.

"I won’t take a risk with him physically. If there was ever a risk, if he said he couldn't do it,  then obviously not," he said.

"But he's telling me he can get there. He’s done a few things which he's felt alright with, between more off-field stuff and a little bit of light stuff on field. So, I think he'll be right."

The Brumbies forward has missed Tests this year with neck pain and the Wallabies and Brumbies have taken vision to governing bodies for a please explain but no action has been taken.

When World Rugby CEO Brett Gosper was in Australia in September, he dismissed the notion that Pocock was illegally targeted without fair punishment. 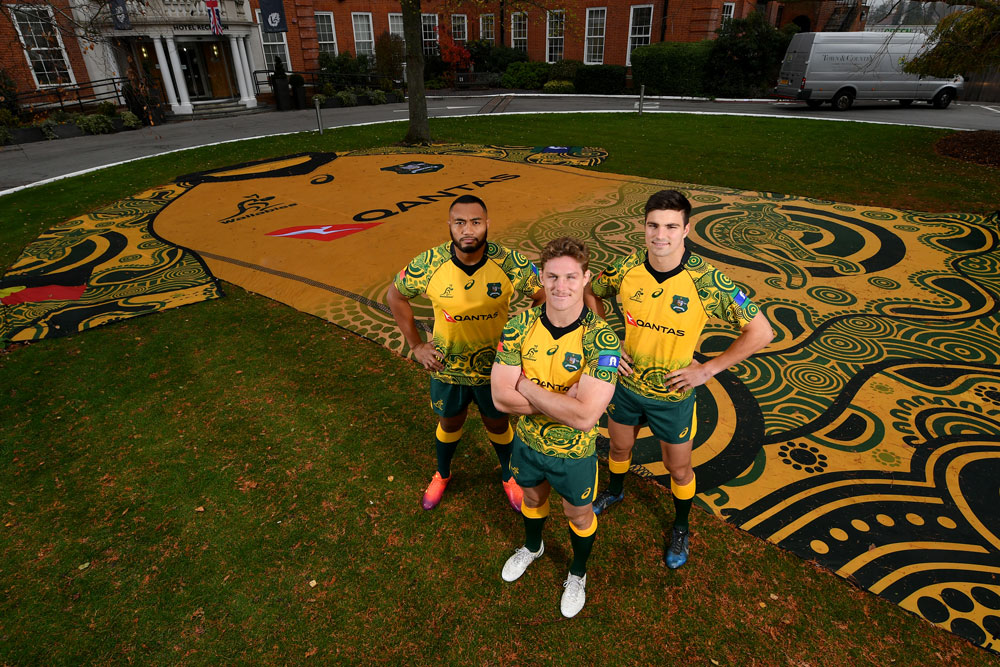 Matt To'omua has retained the chief playmaking spot after an impressive effort against Italy and interestingly, Bernard Foley will line up at 12 again.

In a shock move, Kurtley Beale has been left out of the team entirely, the first time under Cheika that the dynamic back has missed selection when fit and available.

The Wallabies will be wearing their Indigenous jersey this weekend but Cheika said his decision ultimately had to be pragmatic.

"I don't know if we’ve really fired as much in the three-quarters and I want to play this game in a certain way and by going into, with the thought of that strategy I think I had to make some difficult decisions there around who was going to play that style of game and that's what I come up with," he sad.

"I don't want to be romantic about that type of stuff.

"It means a lot to all of us and Kurtley’s shared a couple of stories this week.

"Every time we wear that jersey we want to learn a little bit more about our Indigenous history, which probably isn't taught to us a lot at school as much as it should be and he told those stories with passion this week and our guys are leaning more and more about that all the time and as representatives of Australia on the sporting field, I think that's the right thing to do."

Pocock was the only major injury worry for the Wallabies this week with Cheika sticking with much of the starting team that went down to Wales a fortnight ago.

Cheika has brought veteran tighthead Sekope Kepu into the starting lineup at for the clash, his first run-on spot since the Sydney Bledisloe in August.

Tolu Latu has been handed the hooking reins for the biggest Test of their November campaign, pipping Folau Fainga'a for the season finale.

Israel Folau has stayed at fullback even with the return of Dane Haylett-Petty to the starting side after playing off the bench in Italy.

Jack Maddocks will start on the opposite wing for the first time since the Wallabies' win over South Africa in Brisbane and just the third start of his Test career.

Will Genia will play his 100th Test in the Twickenham encounter, becoming the 10th Wallaby and second Australian halfback to reach that feat.

England named their team earlier on Thursday local time, with Manu Tuilagi on the verge of a comeback from a long Test absence.

Australia takes on England at Twickenham on Saturday November 24, kicking off at 3pm local, Sunday 2am AEDT, LIVE on beIN Sports and SBS.