England coach Eddie Jones forecast his side would be "10 percent better" against Wales after ending Ireland's bid for a Grand Slam with a 24-12 win in the Six Nations at Twickenham on Sunday.

Jones' men were a commanding 17-0 ahead at the interval thanks to tries from fly-half George Ford and full-back Elliot Daly.

Those scores were both converted by captain Owen Farrell -- the son of Ireland head coach Andy Farrell -- with the centre also adding a penalty in what was arguably England's best 40 minutes since their World Cup semi-final victory over New Zealand last year.

"We played with a lot of control, we read the conditions well, read the referee well and at half-time it was a cricket game, we could have declared,"

England lost their tournament opener away to France, the only side that can now complete a Grand Slam, in what was their first match since being beaten by South Africa in the World Cup final.

England welcome reigning champions Wales, smarting from a 27-23 defeat by France in Cardiff, to Twickenham when the Championship resumes on March 7.

"We know every time England play Wales it's the biggest game there's ever been, so I don't expect next Saturday week to be any different."

The former Australia and Japan coach added: "We're just fitter, we're able to play with more intensity and we will be better against Wales. We will have another 10 percent against Wales."

The Welsh are now being coached by Wayne Pivac, who succeeded Warren Gatland after his fellow New Zealander stood down last year after the World Cup.

"They are playing a bit differently, dangerous with the ball when they again get go forward...so we will have a closer look at them," said Jones.

England's third straight win over Ireland owed much to a colossal pack effort in which Jones said Courtney Lawes -- sporting a pre-match black eye worthy of a bout with new world heavyweight champion Tyson Fury -- and Maro Itoje were "outstanding".

But the Australian was in spiky mood when asked about the presence of five locks in his matchday 23.

"We are going to go for six locks next week (against Wales), give you something to write about," said a sarcastic Jones.

"You guys (the media) are so clever, you're all clever so I've just got to suck it all up, enjoy what you say, try to learn from you, and maybe I can pick a better team next week."

This was England's first match at Twickenham since they thrashed Ireland 57-15 in a World Cup warm-up match in August. 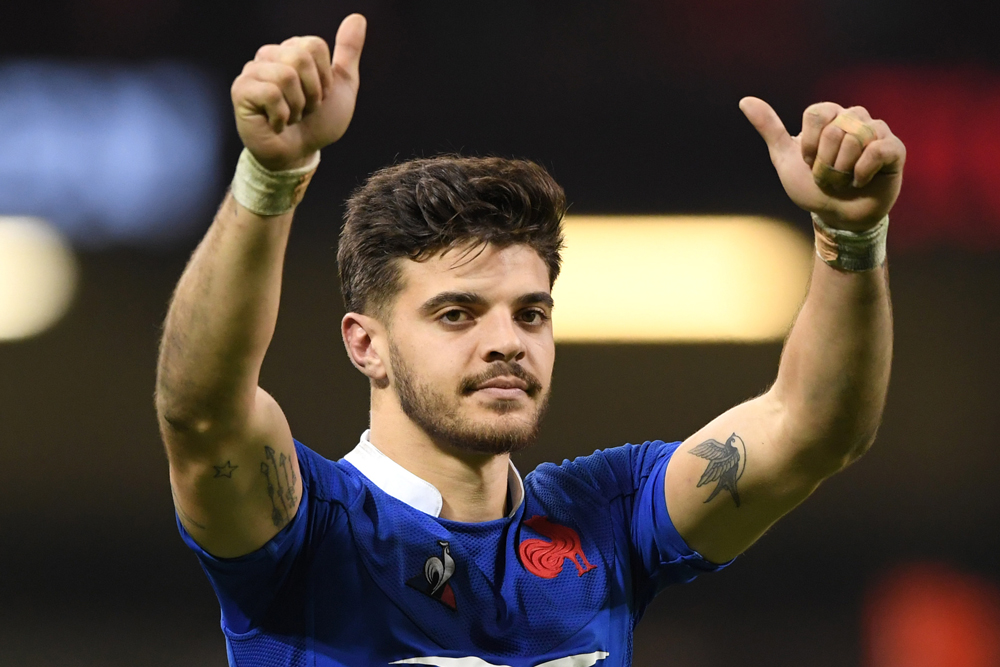 Fullback Anthony Bouthier, lock Paul Willemse and Ntamack all scored tries as France made a bright start but then had to defend for much of the second half before earning a third successive victory in competition and a first win against Wales in Cardiff in a decade.

Prop Dillon Lewis and flyhalf Dan Biggar scored tries for the home side but they lacked a clinical touch and came second best in the physical contest.

His side now face Scotland in Edinburgh on March 8, while Wales are at Twickenham a day earlier to meet England, with their chances of retaining their Six Nations title all but over.

France dominated the opening 30 minutes but went into the break with a 17-9 lead after allowing Wales to creep back into the contest.

The visitors scored their first try on seven minutes following a rare error from Wales fullback Leigh Halfpenny, who timed his jump well to collect a high kick from Ntamack but spilled the ball and saw his opposite number Bouthier race clear to bag his first international try.

Wing Gael Fickou was perhaps unfortunate to see his try disallowed by the Television Match Official for a forward pass in the build-up, but two minutes later South African-born lock Willemse drove over from a line-out, barging his way past three Wales defenders to score on the half-hour mark.

The tide appeared to have turned in the home side's favour at the start of the second period and they reduced the deficit to a single point when prop Lewis clattered over from close range.

But as Wales attacked the French line again, roared on by their home support, Ntamack read the intercept from centre Nick Tompkins's pass and raced 70 metres to score a third for the visitors.

When he landed a penalty just past the hour-mark, the lead was extended to 11 points, but Wales were then denied a penalty try for a deliberate knockdown from Willemse after a review from the TMO.

It was a turning point in the game and, despite a try from Biggar five minutes from the end, Grand Slam holders Wales saw their championship charge this year fizzle out.

FULL TIME | A win in Rome! Tries from Hogg, Harris and Hastings help Scotland to a 0-17 victory in the February sun to secure their first win in the 2020 Six Nations Championship. #AsOne pic.twitter.com/MH41OH3MXW

Scotland defeated Italy 17-0 to record their first win of the 2020 Six Nations and go third in the standings after a scrappy affair at Rome's Stadio Olimpico.

A sensational solo try from Stuart Hogg lit up the first half as the Scotland captain made up for costly mistakes in his first two games against Ireland and England with a dazzling run from inside his own half before finishing in the corner.

The fixture was a meeting between the two sides yet to win a game in the tournament this year and nerves were clear to see as the error count mounted.

But Scotland pulled clear in the second half when Chris Harris punctured the Italian defence to touch down, before Adam Hastings raced under the posts to put the result beyond doubt with one minute remaining.

Scotland, who earned losing bonus points in their opening two matches, move ahead of Wales and England into third place on six points, while Italy remain bottom without a point.

Wales host France later on Saturday before Ireland travel to England in the weekend's remaining fixtures.